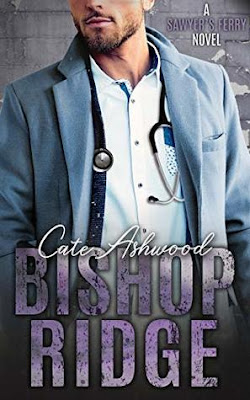 
They found exactly what they weren’t looking for.

Logan:
I had almost everything I’d ever wanted—career, friends, my own easy life in Sawyer’s Ferry, Alaska. I’d given up on filling in the missing pieces long ago. Now, I was more than satisfied with the perfectly practiced, perfectly predictable routine I’d created for myself. At least until Jackson Daley walked into my clinic.

Jackson:
Working the rigs is temporary. Everything in my life is. Jobs, cities, and the guys I take home—nothing sticks, and that’s exactly the way I like it. After four years in Alaska, I’m itching to pick up and leave. I’m ready to move on and start over someplace new, until a one-night stand I can’t seem to shake has me breaking all my own rules.

Now as I get closer to walking away, my reasons for leaving seem blurrier than ever, and for the first time in my life, there could be something worth staying for.

- STEAMY: Logan and Jackson connect sexually first and can’t keep their hands off each other. The inconvenient feelings come later.

- Relatively low angst: Neither man plans on falling in love, and Jackson doesn’t think he’s built for commitment. Logan is willing to take the leap even when Jackson pushes him away. It takes a near-tragedy to get Jackson to see reason.

- A standalone: While Gage and Holden, the MCs from Alaska, are present in the story (and I loved seeing them all dove-eyed), Jackson and Logan’s story doesn’t require any background information.

- Filled with great secondary characters: Besides Gage and Holden, we meet Jackson’s friends and more residents of Sawyer’s Ferry. We also revisit with sassy Frankie, Holden's friend from New York, who appears for but a moment but kind of steals the show.

I am particularly interested in Witt, who cannot hold his liquor but is a total sweetheart. I am crossing my fingers that Witt gets his own story!

- Happy: That seems obvious, since we are talking about a romance, but Bishop Ridge feels languid and cozy. There’s a Thanksgiving celebration with friends, a holiday festival, and passionate kisses.

The ending is more of a HFN than HEA, which was a tad disappointing, but I’m hoping we’ll see more of Jackson and Logan in subsequent books. I also felt like the story line about Jackson's brother was dropped abruptly, but maybe we'll find out more later (please?).

I love this series and hope Cate Ashwood continues to write about gorgeous guys warming up their cold world with hot, HOT lovin’.