Cover Reveal: The Athlete and the Aristocrat by Louisa Masters

Newly retired championship footballer Simon Wood is taking on his next challenge. His plan for a charity to provide funding for underprivileged children to pursue football as a career has passed its first hurdle: he has backers and an executive consultant. Now it’s time to get the ball rolling. 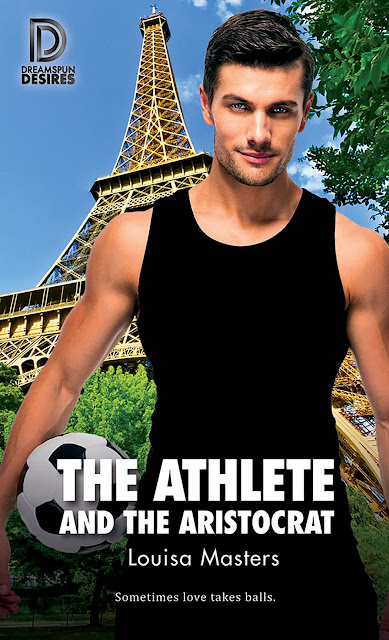 Louisa Masters started reading romance much earlier than her mother thought she should. While other teenagers were sneaking out of the house, Louisa was sneaking romance novels in and working out how to read them without being discovered. She’s spent most of her life feeling sorry for people who don’t read, convinced that books are the solution to every problem. As an adult, she feeds her addiction in every spare second, only occasionally tearing herself away to do things like answer the phone and pay bills. She spent years trying to build a “sensible” career, working in bookstores, recruitment, resource management, administration, and as a travel agent, before finally conceding defeat and devoting herself to the world of romance novels. Louisa has a long list of places first discovered in books that she wants to visit, and every so often she overcomes her loathing of jet lag and takes a trip that charges her imagination. She lives in Melbourne, Australia, where she whines about the weather for most of the year while secretly admitting she’ll probably never move.