Book Review: A Springful Of Winters by Dawn Sister 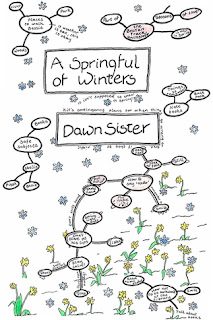 Kit is a bit socially awkward. In fact, the rules of social encounters are mostly a bit of a mystery to him, but he gets by, with lots of lists and contingency plans. He doesn't have any plans in place for when he first meets Stephan, however, and he keeps bumping into the man in the most embarrassing situations. The trouble is, Stephan keeps turning up in unexpected places, arousing suspicion that this gorgeous man might just have some contingency plans of his own where Kit is concerned.

It's not easy to write a compelling story about a neuro-divergent character that at once rings true and never veers into stereotypical territory.

It is clear early on that Kit is not neuro-typical. A bit socially awkward, as most social norms don't make sense to him, he has come to rely on a plethora of lists and contingency plans that allow him to venture into the world without becoming entirely overwhelmed.

The book opens with a quick introduction to Kit, where we find ourselves seeing the world from his POV. The past year has been difficult for Kit. He lost his mother, who was his champion, and then his boyfriend, who was a bit of a jerk. And now Winter isn't quite done yet, even though the calendar says Spring has sprung, and Kit just cannot with the snow that's falling on this first day of Spring.

I immediately loved Kit - his sweet and gentle nature, his love for his dog, his sadness, his outrage at the betrayal of snow in Spring, all served to make me want to hug him and tell him it would all be okay.

Kit's neuro-divergence (he's on the autism spectrum) is never presented as a hindrance. It is, it exists. He makes it work for him, he tries to find reason and sense in an unreasonable and non-sensical world. He relies on Bessie, his service dog, and Yenta, an older woman who's his employer/landlord, and who treats him as the treasure he is. It is immediately clear that Kit loves Yenta, and Yenta loves Kit.


Early on, a scene involving his service dog, who mostly listens, but in this scene doesn't, brings Kit to a location for which he has no contingency plan. This particular adventure serves as the catalyst to Kit meeting the man with eyes like the Spring.

And then he meets him again, during an unfortunate accident involving Kit's bike and the man's car door, and a bruised backside.

While both incidents are humorous, they never felt as if we're expected to laugh at Kit. I giggled at the situations he finds himself in. He gets flustered because he's intrigued by the man with the eyes like Spring, and all of his contingency plans didn't prepare him for falling in love. The book gives insight into what may be termed the struggle neuro-divergent people have to deal with - not only because they have to make sense of a world that doesn't, but also because the world doesn't usually accommodate that what is not typical.

Stephan, the man with eyes like the Spring, isn't portrayed as a hero who saves poor Kit - not all all. I think Stephan recognizes the beauty within Kit, the amazing person he is, and he falls just as hard. He rolls with the punches, he fits himself into the world Kit has created for himself, he listens intensely, and he celebrates Kit as a person.

It's a poignant story, at novella-length, and I enjoyed it immensely. The writing is superb, and the author packs a fabulous story into a few pages. It's a quick read, but it stayed with me long after I closed the file on my e-reader.