Blogtour: Out Of Bounds by Nicki Bennett and Ariel Tachna

A few years ago, author Amy Lane gave a presentation at the RT Booklovers Convention about writing tortured heroes. Amy’s premise was that the story’s main character believes a lie, and as a result bases all his decisions around that lie. The key to resolving the story’s conflict is for life (or the other main character) to prove to him that the lie is indeed a lie. And while we wouldn’t describe either of the heroes of Out of Bounds as tortured, they each definitely believe a lie that affects their ability to enter into a healthy relationship.
Liam Gruene and his best friend, Kate Weaver, start Out and About in part because of their own problems meeting LGBTQ singles who want more than just a hookup. Liam has grown beyond casual sex, but so far his partners haven’t. The parting words of his last serious boyfriend—Be glad you’re good in bed—still sting, even a couple of years later. His track record since then has only reinforced his belief that all people see when they look at him is a handsome face and a toned butt. The lie he unconsciously accepts is that no one wants him for anything but sex. And while he’s not expecting it, he can’t help but hope that Out and About might lead to finding someone who wants the same kind of committed relationship he does.
Erik Jansen is still recovering from a bad breakup and hoping for a fresh start in Houston. His discovery that the man he thought he was building a life with was cheating on him with a client only reinforced his conviction that mixing business and pleasure never leads to anything but disaster. So when he finds himself attracted to Liam, who’s withdrawing funds from the investment firm Erik manages to help finance Out and About, his ethics won’t allow him to act on the attraction. Out and About is exactly what Erik needs to relieve his loneliness—but each event makes it harder to fight his growing feelings for Liam.
We hope you’ll enjoy following Liam and Erik as they work past the lies they believe in—and meet characters who may get their own Out and About stories in the future! 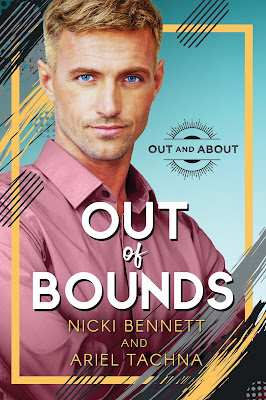 An Out and About Novel

Out and About: No commitments, just fun.

Liam Gruene and his best friend, Kate Weaver, start Out and About to give LGBTQ singles fun, safe, stress-free events where they can meet other LGBTQ singles. Liam hopes—but doesn’t really expect—to meet someone for himself in the process.

Erik Jansen moved to Houston a few months ago after a bad breakup. Since his move, he’s thrown himself into work at the expense of a social life. When Liam withdraws funds managed by Erik’s firm to finance his new venture, it brings Out and About to his attention, and he thinks what the hell. It can’t be any worse than trying to meet someone at any of the gay clubs and bars around the city.

Erik and Liam hit it off right away, but Erik can’t forget that Liam is a client and Out and About is Liam’s job. Erik has an ironclad rule against mixing business and pleasure, and that puts Liam firmly out of bounds.


“Liam asked me out.”
“That’s wonderful,” Eamon said. “Such a nice young man, and so serious about things. He’s an old soul. Where are you going?”
“Nowhere. I know, Travis already told me I’m an idiot for passing up the chance,” Erik said before Eamon could speak.
“That’s perhaps a stronger term than I would have used, but that’s not important. If you aren’t interested in him, you aren’t interested. Or is something else going on here? Something I’ve missed?”


“It isn’t that I’m not interested,” Erik admitted. “But since I didn’t answer him either time he offered, he probably regrets asking in the first place.”
“Perhaps,” Eamon replied, “but if you’re interested, let him know. He cared enough to ask you twice. I’m sure he’d be willing to give you a second chance.”
Before Erik could answer, the waiter arrived to take their order. Once he’d set their glasses of water on the table and promised to bring their food soon, Erik decided talking to Eamon might help. “Travis says Liam’s been flirting with me. I’m not sure he’s right, but maybe I just didn’t let myself see it because… well, I noticed him the day he came in to the office to talk about cashing in some of his investments to help finance Out and About. Which makes him a client, and I don’t date clients.”
“That’s reasonable,” Eamon said. “If Travis is right and he’s been flirting with you, you need to tell him that. Gently, of course, but you shouldn’t lead him on. That said, we both know chances at happiness are rare, and if he’s as interested in you as you are in him, you owe it to yourself to see issues as problems to solve rather than roadblocks.”
“I’ve seen too many instances where someone dating a client or a coworker led to disaster.” Erik took a sip of water, but it didn’t ease the burn in his throat. “My first job after college was a small, family-run firm. The owner and his wife seemed happily married, but I’d been there about a year when he started an affair with one of the female reps. When the wife found out, she filed for divorce, and the company wound up being liquidated so they each got a share of the proceeds.”
“That’s a sad situation for sure, but it’s not necessarily typical,” Eamon replied. “And if I learned anything from my life with Patrick, it’s that you have to take your happiness where and when you find it. Solutions, Erik. That’s what you have to focus on.”
“It’s not just that, Eamon.” He took a breath, but the pain still cut into him. “I told you I’d been in a relationship in LA that didn’t work out. Mark—my ex… I found out he was cheating on me. With one of my clients.”
Eamon grimaced. “That certainly complicates things now, but is the issue really the client part or the cheating part? Would you be any less hurt if Mark had cheated on you with someone else?”
Erik shook his head. “I don’t know. Maybe. At least I wouldn’t have felt as if I’d lost both my partner and my sense of security at the office. The client pulled his account when he found out Mark and I were… together. Of course, I broke things off with Mark, and he resigned from the firm soon after that. I started second-guessing all my business relationships, wondering if the guy I found out about had been the only one. When our branch manager here in Houston retired, I jumped at the chance to get out of LA, but if that hadn’t happened, I might have left the firm anyway. They couldn’t move on while I was there, and neither could I.”
“And security is important to you. I can’t tell you what to do, Erik. It’s your life, not mine. Patrick wasn’t a client, he was a colleague, and we had a lot of people question that as well, especially thirty years ago when it was a lot harder to be open about being gay. We hadn’t come to Rice yet. That happened later, actually, because we weren’t sure we’d be able to keep our jobs and be together. So I do know a portion of what you’re feeling, and for me, that loss of security was worth the life Patrick and I had together. But that’s me. You have to decide what’s most important for you.”
“I’ve never seen a relationship with a coworker or a client end well. It will either cause problems on the job while it lasts or lead to all kinds of ugliness when it ends.” He was the poster boy for that, though Eamon didn’t know the half of it.


Growing up in Chicago, Nicki Bennett spent every Saturday at the central library, losing herself in the world of books. A voracious reader, she eventually found it difficult to find enough of the kind of stories she liked to read and decided to start writing them herself. You can find Nicki on her Facebook page.

She now lives on the outskirts of Houston with her husband (who also speaks French), her kids (who understand French even when they’re too lazy to speak it back), and their two dogs (who steadfastly refuse to answer any French commands).