When It All Comes Together


I had this idea. I wanted to write about someone with hydrophobia falling in love with someone who was obsessed with the sea.


I had this other idea. I wanted to finally write a POV character who was both asexual and trans, like me.


I had this other idea. I wanted to write a character whose identified was a specific non-binary identity, not the umbrella term.


And I had a fourth idea. I wanted to have a partnership where one thought of queer as a liberating identifier, and the other still likened it to being called a faggot in school.


In my day job, I'm a number cruncher. I manage data. Enormous spreadsheets full of numbers and formulas and blah-blah-blah—I'm basically as far from a creative type as it gets. My colleagues flat out do not believe me that I'm an author. It's a running joke in the office. But anyway. I'm a data nerd, so of course, I have a writing spreadsheet. It's a colour-coded spreadsheet with all my book ideas written down, some with titles and some without, and the various queer identities marked next to them so I can keep an eye on any that I'm missing.


Originally, only the hydrophobia/diver love story was Life Underwater. And then I had three question marks scattered throughout the spreadsheet, with the other three ideas.


Then I saw this photo.

(I don't know the photographer or models, but my hugest thanks to them for the picture!)


Just like that, everything snapped together. And I mean everything. I knew their names, Ashraf and Jamie. I knew that Jamie was bubbly and energetic, whereas Ashraf led life at a more sedate pace. I knew that Ashraf was several years older. I knew that they hadn't been together very longer, and I knew that they didn't—even shouldn't—fit if I listed their attributes side by side.


And as I wrote it, the ideas fell away. The lines in my spreadsheet were condensed into one. Ashraf and Jamie. That was all it said, because although I'd set out to write those four ideas, I ended up ignoring all of them and letting Ashraf and Jamie led me where they wanted to go. Their trip to Amman. Their kiss at Whitley Bay. Mosque on the Friday, and church on the Sunday for the baby's christening. I let them guide me, and only when they stopped talking to me did I look back at what I'd done.


All four ideas were there, mixed into this warm, sensual, comfortable story. And it remained—through beta-reading and sensitivity reading, through five rounds of edits, through cover and proofs and ARCs—more of a feeling than a book.


One reader said it was a book to read on the sofa, under a blanket, with a hot chocolate in hand. I recommend that method. Because I should be marketing a book, talking about the process, leaving strategically-placed excerpts—but I'm not.


And I didn't know it when I wrote it.

Ashraf never thought he could fall in love. So when he falls hard and fast for marine biologist Jamie Singer, it’s a shock to the system—in more ways than one.

Even if he can wrap his head around what love is and how relationships work, Ashraf’s not sure this is viable. He’s hydrophobic. And Jamie’s entire world revolves around the sea. What’s the point of trying if so much of Jamie’s life is inaccessible to Ashraf?

But Ashraf has vastly underestimated the pull of loving Jamie. For the first time, he wants to face the water, rather than flee from it. He has underestimated the power of love in making people brave, stupid, or a little bit of both. Maybe it’s time to take a leap—and sink or swim.

He was getting funny looks.

It was an airport. Of course he was. It didn’t matter that he was waiting at the arrivals gate, and he didn’t have a bag. Ashraf always got funny looks in airports.

For once, though, he didn’t care.

Because the flight from Sydney had clicked over to “arrived” nearly forty-five minutes ago. And Australian accents were starting to float out of the tunnel. His phone had already beeped in his pocket twice.

Followed, not ten minutes later, by a second.

Six weeks was almost over.

He saw Professor Hanley first, with his customary battered backpack and fresh-from-the-jungle look. The man was a walking biohazard, and ticked every one of the absent-minded professor stereotypes, from the shabby jacket with the patched elbows to the Einstein-after-electrocution haircut. At his elbow loped his research assistant, George, looking like he’d not slept for the whole trip. He probably hadn’t. And behind them, weighed down with souvenirs and suntans, their brand new PhD students, Meg and Jamie.

The sight of Jamie, even after six weeks, was as familiar as though it had been six hours. That fluffy beanie hat. The strays of light-brown hair escaping around the edges. The spray of freckles that had eluded the sun cream. The small ears and sharp jaw, where Ashraf liked to trail his fingers down from shell to shoulder and feel the life underneath his touch. The bright, brilliant brown eyes that would dim shyly when he did.

That lit up like fireworks in the dark when their gazes met.

The yell was like coming home. Warm. Wanted. Safe—even if the weight that smashed into his chest was anything but. Ashraf staggered, squeezing tight around skinny shoulders and trying to breathe past the scarf that smothered his face. Legs snaked around his thighs and clung too. He hadn’t had a four-limbed hug in six weeks, and he never wanted to put them down.

If only to catch both arms around a lean back, and kiss them.

Fists clutched at the front of his jacket. That beautiful face turned up into his own. Feet pushed up into perfect ballet points, and Ashraf could have stayed right there, holding his entire world in the circle of his arms, holding that weight like it was nothing, forever.

Even if he wasn’t allowed.

The kiss was broken by a laugh, a nose rubbing against his own, and the brightest eyes in the world.

“Missed you,” Jamie enthused and wriggled against his chest as though hugging, without actually putting their arms around him. “What are you doing here? I was all set to surprise you at work!”

“I win,” Ashraf said simply and squeezed. Jamie squeaked, coming up off their feet entirely. “I borrowed Tariq’s car.”

“So do you need to go back with the others, or…”


“Or,” Jamie said firmly and bounced up on the balls of their feet again to deliver a short, sharp kiss. “Let me just say goodbye. Stay right there. Right there!”

Ashraf obeyed. He couldn’t stop smiling. He was getting funny looks again, but for an entirely different reason. Six weeks had been hard—but harder than he’d realised when Jamie smiled like that. Missing them had turned into a sharp, awful pain just with that one smile, and Ashraf didn’t even like the ten feet that parted them as Jamie ricocheted around the others, collecting hugs from Meg and the professor, and pompously shaking George’s hand before dragging him into a hug too.

So when they came back, still wearing their entire personality on their face, Ashraf reeled them in by the jacket and locked his arms around the small of their back.

“Hello,” Jamie whispered against his mouth.

Ashraf silenced them, but only briefly before the laugh spoiled it, and Jamie was nuzzling his cheek.

“Bet Tariq doesn’t know you borrowed the car to pick me up.”

“Bet he’d be pretty upset to get sin all over it too.”

“Want to get sin all over it?”

A smile creased against his cheek, and teeth gnawed lightly on his jaw before the warmth, the weight, the wonder, pulled away. The loss was staggering. Painful. Too soon.

Ashraf slid their fingers together and decided to take the scenic route. 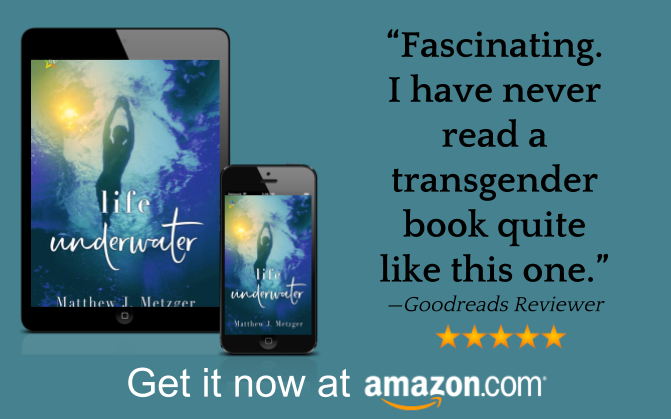 
Matthew J. Metzger is an ace, trans author posing as a functional human being in the wilds of Yorkshire, England. Although mainly a writer of contemporary, working-class romance, he also strays into fantasy when the mood strikes. Whatever the genre, the focus is inevitably on queer characters and their relationships, be they familial, platonic, sexual, or romantic.