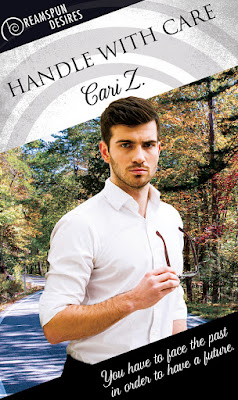 Burned-out social worker Aaron McCoy is on vacation for the first time in years—boss’s orders. Road-tripping to his brother’s wedding with his best friend, Tyler, seems a fun way to spend the mandatory two-week leave, and they set out for Kansas—and a difficult homecoming.

Aaron’s mother was a drug addict, and his adorable younger brother was quickly adopted, while Aaron spent his childhood in foster care. As Aaron mends fences, Tyler hopes to show him that this time, he won’t be left behind to face his problems alone.

Aaron’s opening up to how right it feels to be with Tyler and to the possibility of taking the leap from friends to lovers. But along with the wedding celebration comes a painful reminder of the past. Aaron’s heart is still breakable. Can he put it in Tyler’s hands?


“Why did your day suck so bad?”
Aaron sighed. “Len left today.”
Tyler frowned. “You ain’t dated Len for almost six months. What’s the problem with him finally leavin’ for Nashville?”
“He asked me to go with him.”
Tyler’s jaw dropped, and his eyes opened so wide Aaron was afraid they’d fall out. Tyler was cute in a too-much-personality-to-be-contained way, lanky and blond and perpetually scruffy. He did big expressions well, and shock was especially funny on him.
“What, today?”
“No, six months ago.”
“What the hell did you tell him?”
Aaron raised an eyebrow. “No, obviously. Since I’m still here.”
“Son of a bitch.”
Now it was Aaron’s turn to frown. “I know you guys weren’t friends or anything, but you were singing a different tune six months ago when I broke up with him.”
“That’s before I knew he tried to lure you to Nashville! Never mind givin’ the guy a chance, screw him if he wanted to get you to leave. He can go enjoy his cold bed in the big city and be thankful for it.”
Aaron laughed. “Wow, you’re getting proper Southern vengeful about this! I don’t know why, but it’s hilarious. Keep going.”
“Nah, I’m done.” Tyler stared at the TV, then shook his head. “Actually, nope, I’m not. But I want another beer before I go on a tear. You want one?”
“Sure.” Aaron still—astonishingly—had a room there. It wouldn’t be the first time he’d crashed at Tyler’s after drinking a few too many beers, and he was more than ready for one. He had a spare suit in the closet, he’d be fine.
Tyler bounded off the couch and over to the kitchen. Aaron shut his eyes and listened to the open-shut of the fridge, the soft hiss of the caps coming off, and the slap of Tyler’s bare feet on hardwood as he returned with a—


“Jesus Christ!” Aaron jackknifed upright and almost fell off the couch as the icy glass of the bottle pressed against the side of his neck. “Ty, you fucker!”
“What? You looked hot! I was just tryin’ to be nice and cool you off!” Tyler laughed and backed away from the couch, dodging Aaron’s kick but leaving himself open for a smack to the face from a throw pillow. He stumbled and Aaron pounced, taking him out at the knees and sending him sprawling back onto the floor. “No, wait, don’t spill the beer!”
Aaron paused. “That’s fair.” He took the bottles and set them both on the coffee table, then resumed asserting his dominance through pillow warfare. Aaron had never been comfortable with roughhousing, not even with his actual brother. It was too much like being hit for real. Pillows, though, gave him enough distance that he could handle it without freaking out. The few times he’d gone still and silent when Tyler had tried to tussle with him the first year he was there had been noticeable enough for Tyler to change his ways.
“You—ow—shit, c’mon, I just—ow!” Tyler groped for the couch, but Aaron had his weight just right, and unless he wanted to tip over the coffee table, there was no easy way out. “At least let me get the other pillow!”
“Should have thought of that before you started the fight,” Aaron crowed. “Say you won’t do that shit again.”
“Never!”
“Say it!”
“Fuck off!”
“Wrong answer.”
“Our beer is gettin’ warm!”
Aaron sighed and pushed up onto his feet. “You always know how to get out of trouble.”
“Yeah, that’s what you learn when you’re the youngest of five by ten years. Magic menopause baby!”
He grinned and held out his hand, and Aaron hoisted him to his feet. “Thanks.” He handed over one of the bottles, then held his own out. “Here. To Len, whatever the fuck he gets up to in Nashville, and to you not bein’ an idiot and going with him.”
Aaron rolled his eyes. “You know, there’s Child Protective Services in Nashville too. I could have transferred.”
“No, you couldn’t.”
“Why not?”
“Because Nashville could never be your home, not like here. You’re never gonna move, Aaron. You found a place and you dug in deep, and Len should have known better than to even ask.” Tyler said it like it was simple fact, and not the sort of insight he’d pulled out of his ass.
Aaron opened his mouth to argue, to say that actually, he could move any time he wanted to. He’d done it before. He could do it again. He could. He could.
Yeah, but he probably wouldn’t. Tipton Hollow was a tiny place compared to Memphis or Nashville, kept alive by manufacturing jobs and plenty of retail options. It was close to a few different colleges, near enough the Georgia border that people could commute if they needed to, and set in mountain country, which drew tourists in the fall. After ten years, it really was home.
It helped that Tyler was still around. His four older siblings were long gone and so were his folks, but the feeling of family still remained. Aaron wasn’t so spoiled for family that he could afford to distance himself from the only person he had left.
“Yeah, that’s the face.”
Aaron glanced over at Tyler, who looked casually smug. “What face?”
“You’re appreciatin’ me. I can tell by the way you lose that little frown line between your eyes.”
“I don’t have a frown line.”
“Oh, you do.” Tyler reached out and pressed the pad of his thumb against the bridge of Aaron’s nose. “Right here. When you’re bein’ serious, which is way too often, it wrinkles. When you’re happy, it goes away.”
Aaron batted Tyler’s hand away and had a sip of his beer. “And you think you’re the cause of that? I’m just happy to finally be drinking.”
“Sure. Tell yourself that. But lemme beat your ass at Call of Duty while you work it out, okay?”