In today's post, we are looking at the Art Medium series, and five little-known facts about EJ. There's also a chance to win one of her books!


First up, The Artist's Touch 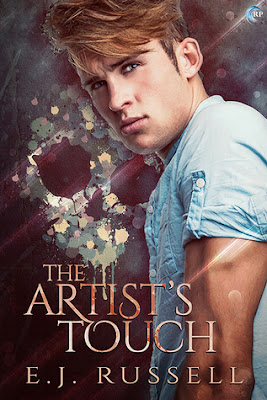 Two men haunted by more than the past.


Painter Stefan Cobbe was homeless and debt-ridden after the death of his wealthy partner, but the worst loss of all was his artistic inspiration. After two years of nothing, he’s offered patronage by an eccentric gallery owner and starts to produce again, canvas after canvas. The only problem? He can’t remember painting any of them—not one single brushstroke.

Luke Morganstern’s reputation as an art-fraud investigator is in tatters. He can’t afford to turn down any job, even a lousy one for an anonymous client who sends him after an unidentified forger in a remote cabin in Oregon. When the alleged forger turns out to be Stefan, the man he never stopped loving, Luke’s professional ethics are stretched beyond the breaking point.

As the two men take tentative steps toward reconciliation, evidence begins to mount that they’re not alone in the woods. Someone—or something—is watching. Something with sinister plans for them both. To escape, Luke must overcome his suspicions and Stefan must trust Luke with his deepest fears. Otherwise they could forfeit their relationship, their sanity—and their lives.


Publisher’s note: This is a heavily revised and significantly expanded reprint of Northern Light.


Stefan stared at his reflection—reddened eyes, pale cheeks, haystack of ill-kempt hair. Yeah, that guy looked capable of anything, up to and including hawking a bad forgery of Whistler’s Mother to Whistler’s father.

His throat tightened, and he took a deep breath. The hell if he was going to prison impersonating a naked scarecrow. The art police could damn well wait until he got dressed.

“Hold on a goddamned minute!”

He cleaned up, pulled on a pair of sweats and a flannel shirt, and staggered through the dim living room. When he yanked on the door, it jammed an inch past the threshold.

“Great,” he muttered. He didn’t know whether it was the cabin’s age, poor maintenance over time, or the effects of the weather, but sometimes the doors seemed to have minds of their own.

He huffed out a breath, braced one foot against the wall, and heaved, ready to brazen it out with his unwanted visitors with his piss-poor I-don’t-remember defense. But when he finally wrestled the door open, Luke was alone on the porch, a grocery bag in one arm and a determined set to his mouth.

Stefan’s stomach lurched, and he squinted in the fading light, scanning the clearing and searching for the trick, the trap. But Luke’s rental car was the only vehicle in sight and no posse stood at his back.

He mustered up some bravado. “Here to beat a confession out of me?”

“Damn it, Stefan.” Luke shifted the paper bag on his hip. “How’d you manage to lose another ten pounds in less than twenty-four hours?”

“If that’s your best pickup line, it needs work.”

“I get that a lot.” Luke grinned, flashing his dimples.

So unfair. Accusatory assholes shouldn’t be allowed dimples. Stefan nodded at the bag. “Did you bring along your collection of interrogation tools?”

Stefan swallowed against another hit of stupid desolation. Trout. His favorite. A reminder of their best times. Luke couldn’t have picked a better torture device if he’d thought about it for a month with both hands. Stefan would have preferred the classic rubber hose or a little friendly water-boarding.

He rubbed his gritty eyes. “Why bother to feed me? I’m sure they have food in prison.”

“Stef. Look at me.” Luke’s voice dropped to his deepest register, the one full of heat and gravel, the one Stefan could never resist.

He lifted his gaze as ordered. Although the promise in Luke’s voice didn’t reach his eyes, at least they weren’t hard and narrow with anger anymore.

Stefan lifted his chin. “Groveling would be better.”

“How’s this?” Luke dropped to his knees, wincing, and offered up the grocery bag. “Forgive me for being a dick and allow me to make dinner for you, because you look like a goddamn skeleton.”

“You were doing okay until that last bit.”

Stefan wrapped his arms tighter across his chest. I’m sorry didn’t equal I was wrong. 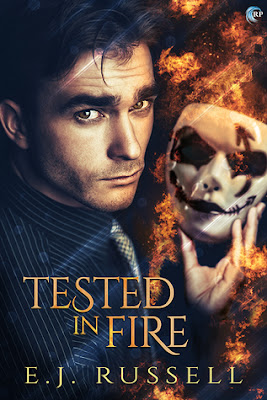 Six months ago, Stefan Cobbe was at rock bottom: grief-stricken, guilt-ridden, debt-laden, and oh yeah—possessed by a homicidal dead painter. But after reconciling with his first love, Luke, and moving to Sarasota with him, Stefan is ghost-free and preparing for his first major show. Yes, he still has debts, and no, Luke doesn’t understand Stefan’s desire for independence. But compared to last year? No contest.

Luke Morganstern ought to be happy. After all, his art-investigation business has recovered and he’s got his boyfriend back. But Stefan stubbornly refuses to move in with him or accept Luke’s financial help, and it’s really starting to bug him. Who knew that the biggest test of their relationship wouldn’t be time or distance, but his own insecurities? After Luke’s next job—a trip to Italy to retrieve a mysterious artifact—he plans to convince Stefan that it’s time to totally commit.

But when Luke returns, he changes, and Stefan begins to suspect that the person in Luke’s skin isn’t Luke at all. He can hardly go to the police and claim his lover is the victim of a supernatural hijacking though. He needs alternative help to find Luke and get him back, because he refuses to let anyone—or anything—come between them again.


Stefan checked the clock. Jason, his next model, wouldn’t arrive for another hour, so he had enough time to clean up a little. He’d been afraid to take even a short shower this morning in case he missed Luke’s call, but morning had stretched to afternoon with no word. And I smell like acetone and probably look like a vagrant.

He started the coffee maker in his abbreviated kitchenette and left it to burble away in solitude while he headed into his tiny bathroom. If I moved in with Luke, at least I wouldn’t bang my elbows on the shower stall every damn day. But if he moved in with Luke before he could arrive free and clear of all his debts, he might just as well still be with Marius.

No. That’s not true. It’s not the same, had never been the same. Stefan preferred Luke’s temper and occasional chestpounding to Marius’s patronizing, dismissive possessiveness. When Luke argued with him, it meant he valued Stefan’s opinions enough to acknowledge them and engage. Marius had simply ignored them.

Stefan stepped out of the bathroom into the attached changing room to towel his hair dry because doing that in the bathroom just begged for bruises. Besides, it gave him a chance to make sure the room was set up for his models— clean robes, baskets for their belongings, nothing left over from prior sessions. It was amazing the things people forgot, as if their possessions weren’t really attached to them. Even the ubiquitous cell phones frequently got left behind. Stefan had had to set up a freaking lost-and-found.

Wrapping a towel around his waist, he pushed aside the curtain and stepped into the studio proper. The aroma of coffee beckoned him across the room. He poured himself a cup as he checked the schedule pinned to the bulletin board over the counter. After Jason’s modeling session, he could—

Arms wrapped around his waist and warm breath tickled his ear. “The coffee smells great but you smell better.”

Stefan’s heart bounded up to his throat, and a smile split his face. “Luke.” He turned into Luke’s embrace and was met with a knee-melting kiss. When he could come up for air, he said, “Well, hello to you too.”

“Mmm.” Luke nuzzled the curve of Stefan’s shoulder, trailing open-mouthed kisses up his neck. “Sorry about the surprise attack. I got home in the middle of the night. Meant to be here first thing, but jet lag kicked my ass. Then I forgot to call because I was too excited to see you.”

The evidence of that excitement was hard behind Luke’s fly. Stefan’s own cock rose in response as he threaded his fingers through Luke’s overlong hair. “I’ll forgive you.” He captured Luke’s mouth in another kiss, pressing their groins together. “This time.”

Luke’s chuckle vibrated Stefan’s bones. “I like this outfit you’re wearing.” His hands wandered down Stefan’s back and grabbed the towel, whisking it away to drop on the floor at their feet. “I like it even better now.”

You can also buy both books in one volume here and here.


I have a Bacon number of 4 (four degrees of separation from Kevin Bacon). I may be cheating a bit, because I’m using “performed with” as opposed to “in a film with,” but in my acting days, I appeared onstage at South Coast Repertory with Arye Gross. Arye was in Big Eden with Louise Fletcher, who was in One Flew Over the Cuckoo’s Nest with Jack Nicholson, who was in A Few Good Men with Kevin Bacon.

I can still remember the phone number from the house where I grew up, but I couldn’t tell you the current cell phone numbers of my husband or any of my kids.

Back when I was in high school (early seventies), our school had a dress code: girls had to wear skirts/dresses, except on the rare assembly day when we were allowed to wear pants. As a later-in-life rebellion, I’ve only worn a dress twice since 1999.

I’ve lived in, visited, or at least driven through all the lower forty-eight states except Idaho, the Dakotas, the Carolinas, Alabama, Mississippi, West Virginia, Delaware, and Maine—although I barely remember the trip to visit my father’s relatives in Tennessee (which included the Kentucky drive-through).

Since I have Morton’s Neuroma in both feet, I can’t wear heels higher than about an inch and a half.  My default winter shoes are Dansko clogs; my default summer shoes used to be Birkenstocks but are now Mephisto sandals.

E.J. Russell—certified geek, mother of three, recovering actor—holds a BA and an MFA in theater, so naturally she’s spent the last three decades as a financial manager, database designer, and business intelligence consultant (as one does). She’s recently abandoned data wrangling, however, and spends her days wrestling words.

E.J. is married to Curmudgeonly Husband, a man who cares even less about sports than she does. Luckily, CH loves to cook, or all three of their children (Lovely Daughter and Darling Sons A and B) would have survived on nothing but Cheerios, beef jerky, and satsuma mandarins (the extent of E.J.’s culinary skill set).

Thank you for celebrating this fabulous author with us. Come back next week for more of EJ's books and another chance to win.