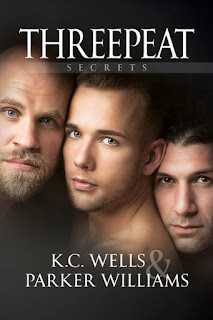 Can two Doms open their hearts again for a young man desperately in need of their help?

Two years ago, Aaron Greene and Sam Thompson were devastated when their submissive broke the contract that bound the three of them together. They still wonder what happened and whether they can find a way to move forward. When Aaron finds a sick young man by the curbside, his protective instincts kick in, and after consulting Sam, he takes Tim home.

After being thrown out of his home, Tim Waterman finds himself on the street, doing whatever he needs to survive. Until a bear of a Good Samaritan scoops him up and saves him. Then one bear becomes two, and a chance discovery gets him thinking about what might be, if he’s bold enough to make a move.

So what happens when Aaron and Sam wake up one morning to find Tim naked in their bed? Will they get a new chance at life, or will history Threepeat itself?

I'm not usually one to read menages. There are but a few I've read in my time on GR, and I can probably count them on one hand. However, not only is this book 3 in the Secrets series, but also written by the fabulous team Wells/Williams, so I definitely had grabby hands.

I have but one complaint after reading this book - why, oh why didn't we get to see Tim's blood family get what's coming to them? Why? I want to read that.

Anyway, getting ahead of myself.

Obviously, this left them reeling, and two years later, Aaron is not ready to try again, and Sam doesn't know what to do. They're in danger of breaking up - that much is clear from the narrative.

Then Aaron finds Tim, out on the streets after the poor young man was kicked out of his home for being gay, rescuing him from a situation that might have turned real ugly if Aaron hadn't shown up.

So, Aaron takes Tim home to Sam, and after nursing him back to health, the two older men offer him a roof over his head in exchange for some light house-keeping and cooking and such. Sex is definitely not on the table, which - thank goodness, because that would have been super gross, and I wouldn't have liked the characters if they'd done that. These are good men, so they don't.

Tim sees the two men, thinks them hunky, observes them, learns about them, and realizes that they are exactly what he wants and needs. If only...


This is a sweet read. Not over the top sweet, but engaging and heartwarming and just smile-inducing sweet. I had some giggles too. There were some edge of my seat moments.

Obviously, this couldn't be a Wells/Williams book without a bit of drama. I won't go into detail here, but it's rooted, as these things often are, in lack of communication and bad assumptions. It doesn't last long, thank goodness, and all three men learn from the experience.

The characters from the previous books all make an appearance, including Eli and Jarod, the owners of Secrets, and Jarod's indomitable mother, who not only provides a bit of humor but also a lot of really good advice.

The ending was perfect and oh so swoon-worthy. Loved it.

I thoroughly enjoyed this book and can hardly wait to see what these authors come up with next. It's definitely best to read this series in order, though each book works as a standalone.