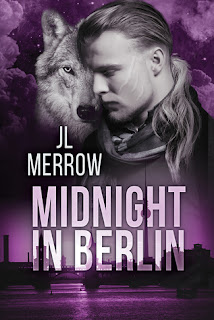 One bad decision can change your life forever.

It’s midnight in Berlin, and drifter Leon is hitchhiking home in the rain, covered in feathers after a wild festival in the city park. He can’t believe his luck when he’s picked up by a hot guy in a Porsche. That is, until he learns his driver is a creature from his worst nightmares—and plans to turn him into one too. He runs, but he can’t escape the werewolf’s bite.

Christoph made one mistake, but he’s paying for it plenty. He took Leon for a rogue werewolf on his way home from a hunt, and by the time he realizes the truth, it’s too late to do anything but make Leon a monster to save his life. That doesn’t save Christoph from the pack leader’s harsh punishment.

As Leon struggles to cope with his horrifying new reality—and his mixed feelings for the man who bit him—he’s desperate to discover not only what’s happened to Christoph, but the secrets their pack leader is hiding from them all.

Secrets the pack will kill to protect.

I loved Leon's irreverent narrative - he was my favorite person in the book.

In a case of mistaken identity, a werewolf bites a human. Oops.

Christoph, a lawyer of sorts, and Lycan, driving through Berlin in his Porsche very late at night, spots Leon, a student/drifter, who's hitchhiking his way back to this hostel. Leon is covered in feather, after a pillow fight at a concert and some rain, and Christoph thinks Leon is Lycan too and has just killed a large bird. So he stops, offers him a rider, and takes him to his pack house in one of the Berlin 'burbs. Because wolves aren't supposed to run around arousing suspicion, and Christoph chides Leon for potentially revealing the secret.

Leon has no idea what the guy with the Porsche is babbling about, but he's not liking it. And never mind the guy's face growing fangs and sprouting hair. When the car stops, Leon bolts just as soon as Christoph realizes his mistake.

Long story short, Leon wakes up Lycan (oops) after Christoph bit him. Christoph is nowhere to be found, and nobody living in the house where Christoph took him is telling him anything useful.

The pack is led by a horrible man named Schreiber. He's brutal, he treats his pack members like crap, and he's not happy that Leon is now a wolf.


Leon discovers where Christoph is being caged for punishment (that was hard to read, OMG), and together with Schreiber's daughter, they flee the house.

The rest of the story is basically telling us about their escape and their movements through Berlin, trying to find out what they can about the experiment Schreiber appears to be running. There's a side story with another pack, this one full wolves.

The plot is fast-moving and the action scenes were fascinating, but the romance was rather bland. Outside of some sort of mating bond, I didn't really feel it at all.

Leon's character stood out for me - the rest of them all were more or less one-dimensional. Christoph was okay, once he let go of his guilt a bit, and we do get a HEA. The descriptions of Berlin felt accurate, and most of the dialogue rang organic and realistic for the characters.

Not one of my favorites by this author, but I enjoyed it.