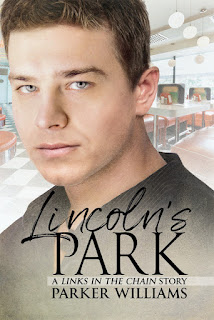 Since then, he’s tried to atone for his past, including walking away from his family’s wealth. He opened a diner, hiring people to work for him that he would have spit on before his epiphany. He’s found peace, which he’s about to lose to a hazel-eyed man.

Noel Simmons wound up on the street when his parents discovered he was gay. His path leads him to Lincoln’s diner, where he asks for a job. He’s thrilled when Lincoln agrees to hire him, but finds his new boss perplexing. Can anyone be this kind and decent?

What starts out as business becomes something more. Noel discovers he needs Lincoln in order to feel safe. Lincoln needs Noel to complete him. But when Lincoln’s past gets in the way of his present, will the two have a future?

I read this book, finished it, and then immediately read it again. That basically NEVER happens, but with this book, I couldn't help myself.

Noel is a young man who was kicked out of his home by his ever so loving parents when he told them he was gay. He was lucky in that he found a place at a local shelter, where he's been living and helping out for the past three years. In need of a job, any job, he stops in Lincoln's diner.

Lincoln is quite a bit older than Noel, with a very different backstory, which we find out as the book progresses. He loves cooking and taking care of people, and he treats his employees like family. One look at the forlorn young man asking for a job, and Lincoln can't help himself - the need to pull the young man into the folds is immediate.

Noel has no idea what hit him - surely nobody can be that decent and kind to someone they don't know at all, right?

I liked both characters immensely, and also the supporting cast - the other employees at the diner, especially Katy, and Robert who runs the shelter where Noel has been staying. However, Lincoln's brother and father - I wanted them to hurt, and badly, but obviously I wasn't supposed to like them.


Noel is still young, and despite the last three years being really rough, he hasn't lost his sweet kindness, his youthful innocence, his positive outlook. He's fascinated by the older Lincoln, but also has no intention of falling for his boss and being out of a job. Except he doesn't realize that Lincoln feels the same, and that they are well matched despite the age difference and the difference in their life experiences. Lincoln's history plays a huge role in who he became, and he's reluctant to reach for Noel, scared to some extent that he's no good for the younger man. Thank goodness for Katy who gives them the push they both need.

What struck me most here is that the author created complex and fully developed characters - Lincoln had some layers that ran much deeper than I initially expected, and Noel has an inner strength I didn't expect from someone so young.

There's a moment toward the end of the book that may be confusing for some - without giving away the plot, I can't really say much about it, but suffice it to say that if you pay attention to what comes before, you will not be confused at all, or even wonder what just happened.

The BDSM-Lite aspect of the relationship was well done and rang true, and I liked that the author utilized it as a source of some conflict that the two men have to work out, which actually strengthened the relationship.

What is emphasized time and again is family - the one you're born to and the one you choose and make for yourself. Family, even if not by blood, is what binds Lincoln and Noel and Katy and Jesse and Robert and all the others. Even Lincoln's brother, who by book's end seemingly has second thoughts about how he's been acting. I have it on good authority that his story will be told in a future book. I cannot wait!

But what really permeates this book is love. There is so much tangible, obvious love in every word on every page, and you are cocooned by it, warmed by it, embraced by it.

I think it's that feeling of love that prompted me to read the book twice in a row, and I highly recommend that you get yourself a copy as soon as you can.