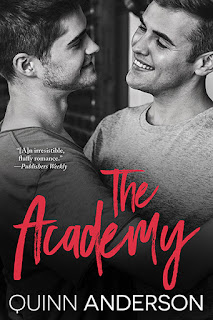 This was a not so stereotypical college romance, and I enjoyed it quite a bit. It had some issues, on which I'll elaborate further down.

Nick arrives at The Academy for his senior year after having taken a year off due to the death of his father. Starting over a tiny Catholic college wasn't the plan, but here we are. Nick plans to focus on his studies, maybe making some friends, and then getting his diploma and go home. Still struggling with grief, and on a tight budget, Nick knows that he's dependent on the scholarship he got, and has no plans whatsoever for a college romance or any such nonsense.

Sebastian is the college campus player. When he spots Nick, he makes a bet with his two oldest friends, Dante and Theo, on who can kiss the new guy first - with the provision that the new guy has to initiate the kiss. Sebastian is the proverbial spoiled rich kid. Or so it seems.

Nick doesn't want to give Sebastian the time of day at first, but slowly the ice melts a bit.

With the premise as it is, Nick and Sebastian don't spend a whole lot of time together on page to begin with, though that time becomes more and more as the plot progresses. As Sebastian develops real feelings for Nick, he's terrified of the bet coming out. The author attempted to show us that despite all the material things he has, Sebastian is still yearning for something money can't buy, something that he lost and cannot get back; his insecurities are hindering him, and causing him to covertly lash out and hurt others before they can hurt him.


There are some clever plot twists here as well, which I didn't see coming, so I was pleasantly surprised toward the end.

What didn't work so much for me is that Sebastian and his friends often sounded and acted a lot younger than their actual presumed ages - they read a lot more like moody highschoolers (especially Sebastian seemed very much a jerk) than college juniors. The poor little rich boy trope is a little overused here also, and while Sebastian's background makes for a good explanation of his behavior, I didn't buy the rapidity with which he falls for Nick, especially considering the fact that Nick and Sebastian have no more than maybe 10 or 15 actual conversations with each other over the course of the book. I wasn't sold on there being an actual romantic relationship between them - it felt more like lust than love.

Dante and Theo, Sebastian's friends - those two had their own issue to work out, and they did, and while they're supposed to be side characters, they actually felt more real to me than the MCs, probably because we see them spent more time together on page than Sebastian and Nick.

The author does a fine job writing the steam, and while there are but two steamy scenes in this book, they were pretty damn hot, but also continued to lead me down the path of believing in their lust, not their love.

Probably not my favorite by this author, but a good effort, and an enjoyable read.