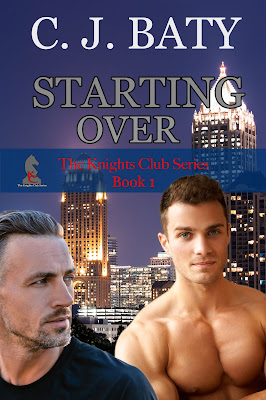 Xavier Knight was starting his life over. A new city. A new club. The past was gone, and he had everything to look forward to… except… love. That ship had sailed, never to return. He was too old to play the games or stack up the one night stands. Until, an old enemy’s son walked into his club and his heart.

Sebastian Brady was through. Through with hiding who he was. Through letting his brother officers dictate his life. And completely through, with his family telling him who he was. He turned his back on his badge and his family’s heritage in the Atlanta police force. But, he never imagined that he’d be serving drinks in a gay bar and working for the hottest silver fox he had ever seen in his life.

Xavier and Seb have a lot to learn from each other. Hopefully, their growing love will survive Xavier’s past, Seb’s family, and a host of characters with secrets of their own, who all work at the Knights Club.

The Knights Club (formerly the Gentleman’s Club) first appeared in the Warfield Hotel Mysteries Series. It was owned by Stony Whitecastle and is located in Atlanta, GA. At the beginning of the Knights Club/Starting Over, Stony is selling the club to Xavier Knight. He renames the club the Knights Club and instead of a private club opens it the public. Some patrons still hold membership though.

This series involves Xavier and his crew of employees and their involvement with a local police family. We meet Sebastian Brady in Starting Over along with his dysfunctional family. Seb’s struggle with his homophobic oldest brother and the shadow of his dead father, Detective Delmonico Brady, haunts Seb as he tries to make a new life for himself.

Occasionally, a character from the Warfield Hotel series will pop up but they are not central to the story line. Everyone who works at the Knights Club has a past and secret they are running from. They are mixed bag of people who have been suffered many things. The Knights Club is their home and the people who work there are their families. But, even families don’t like each other all the time…

She has a loving and supportive family who don't mind fixing their own meals when she is in the middle of a story, and a network of friends who have encouraged and cheered her on in her quest of being an author.