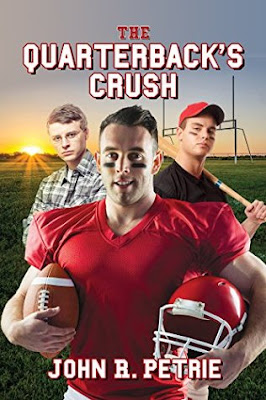 Because it’ll take a miracle for him to pass English and trig so he can stay on the football team, get a scholarship, and go away to college—where the distance from his friends and family will give him the confidence to finally tell them he’s gay. But flunking his classes will put a stop to all of his dreams.

Luckily there’s Tommy Peterson to help him. In Dylan’s eyes, Tommy’s perfect. Short, smart, and sexy, he checks every one of Dylan’s boxes, so it’s no surprise when Dylan falls head over heels. Too bad Tommy doesn’t seem to feel the same, and a pining Dylan accidentally outs himself to the team. Now Dylan has to deal with the fallout of his coming out to the team, his dad, and his coach while trying to score the ultimate touchdown—the love of Tommy Peterson.

First, I want to thank you all for having me over to visit! It’s really sweet, so, thank you.
I’m not sure exactly where Dylan Porter and Tommy Peterson came from. There were a few different things that seemed to hit my brain at the same time. The first was a short film on Youtube where a gay teen had a crush on a jock who was in the school play. The jock flirted and smiled and they stripped down to their underwear for a nighttime dip in a pool. And then other jocks stopped by and the gay teen was pushed away, both literally and figuratively. It was a good movie, actually. The gay teen was thoughtful, in need of affection and full of lust, but not desperately so. The jock was manipulative, but not mean-spirited, just thoughtless and selfish.
The second thing was my best friend, Margie. She always has a backwards way of looking at things. So, that’s where Dylan and Tommy came from.
The third was that I reread some of my Wonder Woman comics. See, I’ve loved Diana (we’re on a first name basis) since I was six. One of the things I love about her is the fact that she can kick butt better, faster, and more amazingly than the guy she’s dating. So it got me to thinking.
What if it wasn’t the nerd/theater kid/singer/dancer who was longing for the jock? What if it was the other way around? We’re used to seeing a jock who’s self-confident, sure of themselves. Maybe a bit off center when it comes to the feelings the gay nerd brings out but still they’re sure of who they are. What if the jock was fine with being gay but became so incredibly tongue tied and completely incapable of romancing the nerd of his dreams.
In the first draft I wanted Dylan to be completely together at all times. I wanted him to be almost two different people. When he was with his friends, he’d be able to handle anything. He’d be the leader, the best friend, and the hottest, most eligible guy in school. I wanted him to be Superman. But when he was around Tommy, I wanted him to be Clark Kent, bumbling and dropping things, and running into walls. Tommy was supposed to be an enigma. Dylan didn’t know much about him. Just that Tommy was sure of himself, secure and ready to be something better when high school was over.
That didn’t even make it through the end of the first draft. I was having too much fun writing those moments when Dylan couldn’t keep his thoughts to himself. He’s one of those people that I think I’d like to be. He’s an endearing dude.
Tommy became less aware of himself. He was a little more unsure and quirky. They both became a little more like Cary Grant and Rosalind Russell in the classic movie, His Girl Friday. They annoyed each other and they loved each other and they both brought out the best and worst of each other.
That’s what I aimed for, anyway. The Quarterback’s Crush is out on 9/4/18 and I can’t go back and rewrite anything. I can only hope anyone who buys the book enjoys spending time with these two and their friends as I did. And I really did love them. Here’s an exchange between the two of them.

“It sounds like it. Hey, maybe I could come along?” Did I just ask him out? On a date? Is it a date if you invite yourself along?
Why did I just invite myself? That’s rude. Dammit. Now I was a pushy jock.
“Um, sure.” Tommy looked out the window and then me. “I mean, I’d invite you along, but my dad can be kind of, well, he’s really particular. You know?”
“Sure, Tommy. I understand. It’s cool. I’ve got to study tonight. I really want to make sure I get ahead on my trig. Test next week and all.” I’d really like to think that I’m the kind of guy who thinks before he speaks, but sometimes, I just can’t shut up. “I want
my tutor to be proud of me, you know.”
“Sorry?”

I almost bit my tongue because I sounded so needy. “I don’t want to disappoint you.” I was really nervous, so I laughed and kept talking. “When you’re mad at me, you frown, and you get this really deep line in your forehead. Plus, you sigh, and use that
voice.”
“That voice? I have a voice?” He looked at me, and I saw that deep line in his forehead.
“You do.” I smiled at him. “And the sigh. Don’t forget the sigh.” The forehead line got deeper. “Relax, Tommy. It’s… it’s charming.” I kept talking. Why can’t I stop talking? “Besides, you have a different voice you use when you’re happy.”
“I have more than one voice?” The line in his forehead went away and now he only looked confused.
“Yep.” I looked over at him while I slowed down for the stop sign. “It’s cool, though. You have the best happy smile.”
“Happy smile?”
I looked away and waited for the car on our right to turn. “Yep. You have a happy smile and an annoyed smile and a nervous smile. And your happy smile makes me smile too.” Okay, first I invited myself to a lecture he was going to, and now I was flirting.
Was I flirting? Was he flirting with me? Can you flirt with someone who’s not flirting back? He didn’t seem flirty. He seemed to wonder what I was talking about. Was he confused by me? Why was his confusion so sexy to me?

I really hope you enjoyed that. Honestly, I’d like to make people smile a little bit. It’s important to smile.

John R. Petrie grew up in Boston and now lives in the Bronx, NY. Almost his entire working career has been spent around books, from his first job in the town library to more than twenty years bookselling in one of the biggest bookstores in the US. He’s also worked for the Housing Works thrift stores in NYC, which provides services for the homeless and HIV communities, as well as a comic book publisher.

He’s had stories published in True Romance magazine, had a play he wrote produced at his college, acted, danced, and was nominated for an acting award playing Belize in Angels in America.

He stays up too late, eats too much junk food, and has been reading Wonder Woman comics for over forty years.

He is very, very happy to have his debut novel published by Harmony Ink Press. He hopes to continue writing stories which make people smile.