Thanks for checking out the blog tour for One-Eyed Royals, the fourth book in the Seven of Spades series! We left Levi and Dominic broken up and broken-hearted. But there are new threats facing Las Vegas, and crossing paths on a case again is just their luck… 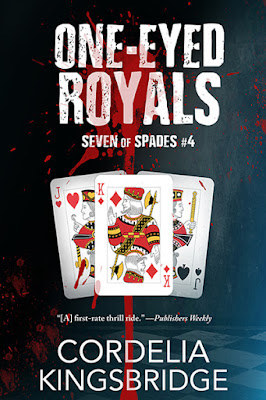 Shattered by their devastating breakup, Detective Levi Abrams and PI Dominic Russo find themselves at war right when they need each other most. While Dominic is trapped in a vicious cycle of addiction, Levi despairs of ever catching the Seven of Spades. The ruthless vigilante’s body count continues to climb, and it’s all Levi can do to keep up with the carnage.

When Levi’s and Dominic’s paths keep crossing in the investigation of a kidnapping ring with a taste for mutilation, it feels like history repeating itself. Thrown together by fate once again, they reluctantly join forces in their hunt for the mastermind behind the abductions.

But the Seven of Spades hates sharing the spotlight, and they have an ace in the hole: a new batch of victims with a special connection to Levi. Their murders send shockwaves through Las Vegas and change the rules of the game forever.

The Seven of Spades has upped the ante. If Levi and Dominic don’t play their cards right, they’ll end up losing everything.

Warning: This excerpt may contain spoilers for One-Eyed Royals and the Seven of Spades series.
Levi paced the lobby of Caesars Palace while he waited for Martine, ignoring the sideways looks from the tourists who gave him a wide berth as they walked past. There was no guarantee that this murder was connected to the “gift” the Seven of Spades had promised him, but a sick pit in his stomach assured him that it was.
Everything the Seven of Spades did was meticulously planned down to the tiniest detail. They had left him that birthday card to fuck with his head, and the timing of their next murder wasn’t an accident—it had been long enough for Levi to stew in anxious anticipation of the possibilities, but not long enough to take the edge off his apprehension. This was sure to be the next stage in their scheme.
“It just had to be a Saturday, didn’t it?” Martine groused when she showed up. “Simone’s so pissed I’m missing another game.”
“At least Antoine will be there.”
“Yeah, but I’m getting pretty sick of having to tell my girls I can’t show up to support them because a serial killer is rampaging around the city slitting throats left and right.”
As they proceeded to the elevator, Levi said, “Why here? The Seven of Spades doesn’t kill tourists.”
“Maybe it’s an employee.”
They rode up to the twentieth floor and entered one of the hotel’s lavish three-bedroom suites. Levi wrinkled his nose in distaste as he glanced around—this entire place was a garish, over-the-top Roman Empire fantasy extravaganza. It looked like a cheesy porn set.
No sooner had they stepped inside than they were greeted by Jonah Gibbs, a stout, ruddy-faced officer with a volatile temper—though Levi was giving him a run for his money these days.
“Hey, Detectives. I gotta say, this is a bizarre one, even for the Seven of Spades.”
Levi and Martine followed Gibbs through the main room of the suite. There were busy people crowding the large space—uniformed officers, CSIs, the crime scene photographer—but there were also six civilians who Levi noticed right away. They were all men, ethnically diverse but in the same age group—early thirties, like Levi himself.
Most appeared to be in shock, motionless and glassy-eyed, but one man was crying and another was shouting angrily into his cell phone by the window, almost incoherent in his grief.
“Bachelor party weekend,” Gibbs said, gesturing to the men. “Their buddy won some kind of all-expenses-paid getaway. Bet they’re wishing they’d stayed home now.”
“Gibbs,” Martine said sharply, impatient as always with his lack of tact.
They entered the master bedroom, and for Levi, time screeched to a halt.
A white man was zip-tied to a chair, his throat slit in a gaping arc. His mouth was duct-taped shut, and the playing card was stuck horizontally to the tape right over his lips. An enormous red ribbon had been wrapped around his chest and tied into a giant bow like he’d been gift-wrapped. Half a dozen gaily patterned balloons were attached to the back and arms of the chair, all bearing the slogan HAPPY BIRTHDAY! along with smiley faces and colorful stars.
But Levi’s brain only cataloged those details on autopilot, because the rest of him was paralyzed. Every movement in the room seemed to happen in slow motion, every sound around him a prolonged, distant echo.
“Meet the groom-to-be,” said Gibbs. “His friends found him like this when they woke up. Poor bastards.”
Time came unstuck. Levi reeled backward, stumbled, and crashed into the wall hard enough to rattle a nearby painting. He hadn’t breathed for at least ten seconds, so when he finally sucked in air, his loud gasp echoed through the bedroom.
Everyone stopped what they were doing to stare at him. Martine hurried to his side.
“Levi, what’s wrong?”


“He’s one of them,” Levi croaked. He couldn’t take his eyes off the victim.
Though the man’s face was a decade older, Levi would never forget it. The image was seared into his memory like a cigarette burn—those same features twisted into a hateful sneer, spewing homophobic bile at him while he was beaten to within an inch of his life. Those hands had choked him, punched him, held him down. Those feet had kicked him again and again, until he felt his ribs break and puncture his lungs and he knew he was going to die right there on the dirty asphalt of the parking lot—
“One of who?” Martine asked.
A violent shudder racked Levi’s body. “He’s one of the men who attacked me in college.”

Cordelia Kingsbridge has a master’s degree in social work from the University of Pittsburgh, but quickly discovered that direct practice in the field was not for her. Having written novels as a hobby throughout graduate school, she decided to turn her focus to writing as a full-time career. Now she explores her fascination with human behavior, motivation, and psychopathology through fiction. Her weaknesses include opposites-attract pairings and snarky banter. Away from her desk, Cordelia is a fitness fanatic, and can be found strength training, cycling, and practicing Krav Maga. She lives in South Florida but spends most of her time indoors with the air conditioning on full blast!

To celebrate the release of One-Eyed Royals, Cordelia is giving away a $10 Riptide gift card! Leave a comment with your contact info to enter the contest. Entries close at midnight, Eastern time, on September 15, 2018. Contest is NOT restricted to U.S. entries. Thanks for following along, and don’t forget to leave your contact info!