Blogtour and Review: Love At First Hate by JL Merrow

Hi, I’m JL Merrow, and I’m delighted to be here today as part of the blog tour to celebrate the release of Love at First Hate, the second of my contemporary MM romances in Riptide’s multi-author Porthkennack series.
Love at First Hate features a romance between a newcomer to Porthkennack and a character whom readers of my first two Porthkennack books, Wake Up Call  and One Under, will have already met: Bran Roscarrock. As you might imagine, Bran, who is an antagonist in the first two books, is on something of a redemption arc. But we’ll also get to see where he’s been coming from, and why he’s acted as he has. 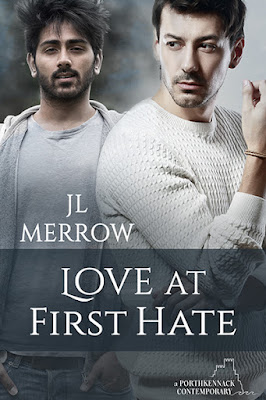 Bran Roscarrock has been living in the closet all his life. As heir to an expansive family legacy in the town of Porthkennack, old-fashioned ideals of respectability and duty were drummed into him since childhood, and he’s never dared to live—or love—openly.

Sam Ferreira, an old friend of Bran’s brother, Jory, is a disgraced academic desperate to leave his dead-end job. When Jory asks him to take over as curator of a planned exhibition on Edward of Woodstock, the fourteenth-century Black Prince, Sam leaps at the chance to do what he loves and make a fresh start.

But Bran’s funding the exhibition, and though sparks fly between the two men, they’re not all happy ones. Bran idolises Prince Edward as a hero, while Sam’s determined to present a balanced picture. With neither of them prepared to give ground, a hundred years of war seems all too possible. And if Bran finds out about Sam’s past, his future may not be bright, and their budding romance may be lost to history.

Although you might be forgiven for thinking the title of this post refers to the interracial romance between Sam and Bran, what I’m talking about today is the black and white flag of St Piran. 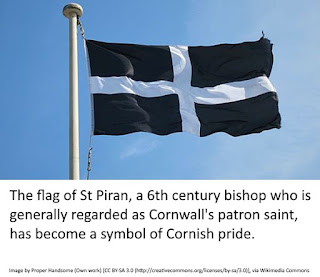 For an ancient country, Cornwall’s flag is surprisingly modern—or at least, our knowledge of it is. The earliest record of the flag of St Piran, with its white cross on a black background, as a standard of Cornwall is not until 1838.
The tale of St Piran himself, however, is considerably older. Like many national saints, he was actually an immigrant. Piran was a 5th or 6th Century Irish bishop who, having made himself unpopular with local royalty, was flung into the sea with a millstone around his neck. A firm believer in “If life gives you lemons…” he promptly floated on said millstone over to Cornwall, presumably thumbing his nose at his former countrymen as he sailed away.
Nor did he rest on his laurels when he got to Cornwall. St Piran is credited with discovering tin, source of Cornish wealth for hundreds of years. Apparently he noticed one day that a black stone he’d thrown on his fire was leaking a white liquid—and the flag, with its white-on-black, is said to commemorate this.
St Piran lived, or so the story goes, for a full two centuries, and even then didn’t die of old age: he met his end when he tumbled down a well. Possibly he was drunk—he’s renowned for having been fond of a tipple. Sadly, he appears not to have had his millstone-cum-flotation-aid with him this time.


Saints aside, the flag bears close relation to much older flags of Brittany, an area which has a strong cultural and linguistic connection with Cornwall. The medieval Breton flag is St Piran’s flag in negative—a black cross on a white background—and the coat of arms of the Saint-Pezran family is a white cross on a black background. It’s also similar to Wales’ flag of St David, a yellow cross on a black background, but that flag appears to be even newer!


Whatever the origins, there’s no denying that the Cornish people have adopted the flag of St Piran enthusiastically, with a new surge of pride in their heritage. In Cornwall, it’s everywhere, on bumper stickers and at celebrations—and elsewhere in the world, it’s increasingly recognised as a symbol of Cornwall (or Kernow, in the old tongue).

While this is the 11th book in the loosely connected Porthkennack series, it's book 3 for the Roscarrocks; this one being about Branok (Bran) who was a real git in the first two books, and whom I'd basically written off as a jerk not worth my time.

Boy, was I wrong.

It could theoretically also be read as a standalone, though the characters from the previous two books make an appearance, and it would probably be best to read both of them before reading this one, to fully grasp the layers of Bran's misunderstood character.

Bran was a real a-hole to his nephew Devan (from book 1) when he came to Porthkennack to search for his birth mother, though it's not clear why until this book.

Bran showed some contempt for his little brother Jory (from book 2), and again, the reasons aren't clear until this book.

Living with a huge burden on his shoulders, his late father's voice in his ear, Bran has locked himself into the closet all his life, never feeling free to be who he really is. His twin sister Bea (Devan's mother) and he have spent most their adult life on their family estate, setting themselves apart from the general populace as what would 500 years ago be similar to feudal overlords.

And Bran has for many, many years kept a massive secret from his sister and brother.

Sam Ferreira is an old friend of Jory, whom he met while at university. Trusting someone he thought he could trust turned out to be detrimental for Sam's academic career, and, in some debt from gambling, he's now in dire need of a new job. When Jory comes to him about helping with an exhibit Bran is funding, about The Black Prince, Sam jumps at the chance to prove himself and says yes.

And thus Bran and Sam meet. The romance between them is slow burn by design - and when I say slow, I mean slooooooooow. There's a lot of UST and longing, but we're more than halfway in before they first kiss. To be honest, the slow burn was necessary - both men have baggage, and it takes some time for Bran and Sam to trust the other.

The romance is quiet, almost taking a backseat to the rest of the plot, which is basically an exploration, a study of Bran's character. The man, outwardly sensible and hard and difficult to read, is in reality vulnerable, insecure, and scared. He hides his true self. He's taken on the responsibility of carrying the family legacy. He's jealous, he's demanding, and he barks at others. But he puts family above all else, he's generous, and he desperately wants to be loved. Even if he's loathe to admit that to anyone, including himself.

I'm not one who needs a lot of on-page sex, and this book doesn't have a lot of it, which suited me fine. What passion there is felt genuine. We leave Bran and Sam with a HFN, but one that I can absolutely see turn into a HEA, possibly in a future book in which we get to revisit these characters.


To celebrate the release of Love at First Hate, JL is giving away a $10 Amazon credit! Leave a comment with your contact info to enter the contest. Entries close at midnight, Eastern time, on September 8, 2018. Contest is NOT restricted to U.S. entries. Thanks for following along, and don’t forget to leave your contact info!


About the Porthkennack series:

Welcome to Porthkennack, a charming Cornish seaside town with a long and sometimes sinister history.
Legend says King Arthur's Black Knight built the fort on the headland here, and it’s a certainty that the town was founded on the proceeds of smuggling, piracy on the high seas, and the deliberate wrecking of cargo ships on the rocky shore.
Nowadays it draws in the tourists with sunshine and surfing, but locals know that the ghosts of its Gothic past are never far below the surface.
This collaborative story world is brought to you by five award-winning, best-selling British LGBTQ romance authors. Follow Porthkennack and its inhabitants through the centuries and through the full rainbow spectrum.
The Porthkennack novels are standalone stories; release order and era are: