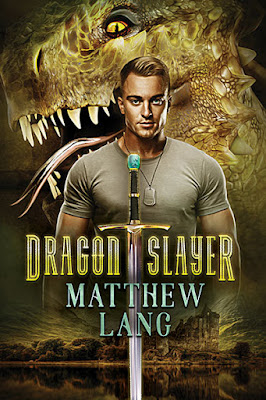 Kill the dragon, marry the princess, and rule the kingdom. It’s a fantasy come true… if you’re straight.

Adam is a chemistry student and martial artist, active in his local chapter of the Society for Creative Anachronism. But none of that prepares him to be the savior of a faraway land locked in perpetual dusk.

In a world of shape-shifters, necromancy, and religious politics, Adam is fated to slay the golden dragon, Khalivibra, and defeat its mind-controlling sorcery to help Princess Esmeralda of Aergon retake her city. Tradition dictates he’ll rule by her side—but Adam is much more interested in Duin, a warrior who changes to beast form in the light of the sun… or fire.

Adam hopes he and Duin might end up together when their ordeal ends. But first, the reluctant hero, the spell-casting heir to the throne, the beast-shifting object of Adam’s desire, a six-legged cave lizard, and any allies they can gather must do the impossible… and live to celebrate their victory.

AER GORAGON is the capital city of the kingdom of Aracao. Actually, it’s the only city in the kingdom of any note. It’s populated by some two thousand odd people, and watched over by the ever-vigilant eye of its queen: the great gold dragon Khalivibra.

“It means the Golden City, I think it was named because it was the heart of the kingdom, and all the wealth flowed there.” – Self styled Princess Esmeralda of Aergon, would be usurper to the throne.

One of the holy cities of the sun goddess Helene, the city is known as ‘golden’ for its walls, which are said to have reflected the light of Helene back towards her. While they still do, some have argued that the city should therefore be known as the red city, as the light of Helene is the same unwavering red as it has been in living memory. Not once has it ever been golden. Any visiting tourists are advised not to repeat such heresy, as our queen has gently reminded such doubters that the light of Helene will once again be gold when humanity has paid our penance in driving her sister from the skies. 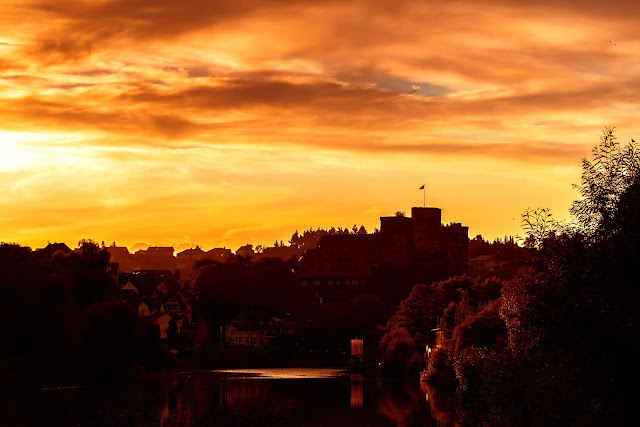 Although often dismissed as a ruin, the northdark quadrant of the city is in good repair and bustling with the activities of daily life. Once the houses of Aracite nobility, the buildings now house the majority of the population, a truly egalitarian society where all men are equal. All women too, for that matter. While the locals have a reputation for being quiet and unfriendly, the truth of the matter is that the people of Aer Goragon have developed a near telepathic understanding of each other to the point where they require very little speech. They are, however, fully capable of it, so don’t be afraid to walk up and ask for directions or assistance. You’ll find them all only too happy to help. However, be mindful that some words commonly used elsewhere are not frequently used in Aer Goragon, especially those relating to day, night and/or time of day. Since there is no day and night cycle in Aracao, at least, not anymore, citizens typically measure time in sleeps. So instead of saying “How are you today?”, a better greeting would be “How are you this sleep?”, “How are you this wake?” or “How are you this waking?”. Since sleep is typically an unconscious activity, ‘wake’ or ‘waking’ is sometimes substituted by the locals. Similarly, the rather innocuous phrase “See you tomorrow” is likely to cause confusion. “See you next sleep” is more appropriate. When referring to the sleep just gone, “yestersleep” is appropriate. For a full lexicon of common phrases, please see Appendix A.


The lived section of the city is bounded to the south by the Thoroughfare of the Gods, sometimes called the Godsway; a large raised ceremonial highway linking the Temple of Helene in the light to the Temple of Selune in the dark. From the steps of one you can look all the way down the Thoroughfare of the Gods to the temple of her sister. Be aware that all services are closed to tourists, and in any case, most worship is led by the queen in King’s Square, the public space outside of Goragon Keep, where citizens have traditionally gathered to hear the monarch speak. Goragon Keep itself hosts guided tours on an ad hoc basis. Admission costs are all your coins, gemstones, jewellery and precious objects. All proceeds go directly to the city hoard treasury.

The light boundary of the inhabited area ends at a small forest, once the King’s Menagerie, now grown quite wild. A significant portion of that area has been turned over to farming, however the descendants of the menagerie creatures are said to lurk deep in the woods of the once botanical gardens. It is considered ill advised to explore the deep woods without armed escort, as Her Majesty’s protection only extends to the open areas and the city itself.

Should you wish to relocate to our grand city, as many tourists do, an audience with Her Majesty herself can be scheduled at Goragon Keep. Fully one hundred percent of people who schedule an audience decide to stay on in Aer Goragon, and help grow our glorious Kingdom, the safest in all the known lands. Why not visit yourself and see what all the fuss is about?

Thank you for reading this sixth post in my Dragonslayer Blog Tour. As some of you may know I’ve been giving away ebooks from my back list and you can win one of them today. All you have to do is comment below and tell me about a place you’d like to visit and why—either real or fictional. If it’s fictional please also tell me what book it’s from so I can track it down myself. One random commenter will win a book here! You can find the very last stop of my blog tour over at the DSP Publications website on the 1 of October. Hope to see you there! 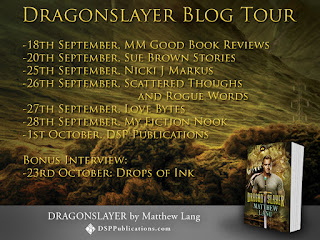 Matthew Lang likes being on the run. Sometimes for health, but more often to see another country or culture. Preferably in person, but more frequently in his mind’s eye through the written word. Matthew likes his men hot and spunky, his focaccia more Italian than British, and his vampires to combust when exposed to sunlight. His nurses say that rumours of him escaping his straightjacket are absolute nonsense and he definitely hasn’t been let loose amongst the population of Melbourne, Australia, no matter what the internet says.