Blogtour: All For You by Andrew Grey

This story is very much a mish mash of things for me.  I lived in California a few years after college and fell in love with the Sierras.  They gave me peace at a time when I really needed it.  So I think that’s part of the reason I set All For You there.  I really needed to revisit that place and rekindle some of that peace.  Okay, I also watched Footloose and I know that influenced the story somewhat, especially when it came to the reverend.  He snuck his way in.  But mostly this is a story about a young person figuring out who he is and what it is he wants out of life.  For all of us, there comes a time when we have to decide the kind of person we want to be.  Are we going to continue to hide and live in fear, or are we going to stand up, say ‘this is who I am’ and damn the consequences.   I had one of those moments when I was in my mid twenties and I’m sad to say that I took the easy way out, hiding who I was for a long time.  Those were some of the darkest days of my life and the light really only started to come out when I was true to the person I really was.
In a way I put a lot of myself and some of my own struggles figuring things out, finding my own way, and thankfully, like Willy, I found someone who was willing to help me complete the journey so I didn’t have to do it all alone.  And he’s still with me, making the journey through life together with me.  See happy ever afters both in the story and in real life.  Win... win. 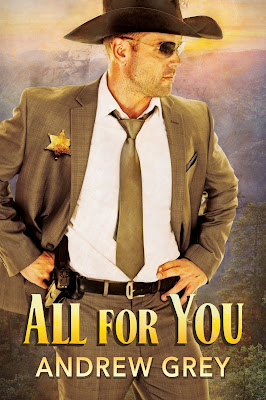 The only path to happiness is freedom: the freedom to live and love as the heart wants. Claiming that freedom will take all of the courage one young man has, but he won't have to face it alone. In small, conservative Sierra Pines, California, Reverend Gabriel is the law. His son, Willy, follows his dictates, until he meets a man in Sacramento and reunites with him in his hometown—right under his father's nose.

Reggie is Sierra Pines's newly appointed sheriff. His dedication to the job means not flaunting his sexuality, but when he sees Willy again, he can't escape the feeling that they're meant to be together. He'll keep Willy's secret until Willy is ready to let the world see who he really is. But if going up against the church and the townspeople isn't enough, the perils of the work Reggie loves so much might mean the end of their romance before it even gets off the ground.


The reverend stood straight and met Reggie’s gaze. “And you feel free to do the same. My office and church are always open.”
“That’s great to know.” Reggie waited while the reverend looked to his left, and a man who had been sitting on one of the benches joined him.
Willy. It was Willy from the bar. Reggie opened his mouth to say something when the reverend turned back to him.
“Sheriff, this is my son, William.”
Willy looked even more scared than he had sitting at that table between the two rats. He was pale, his eyes downcast and his right hand shaking a little. Jesus, he was Reverend Gabriel’s son. Reggie was willing to bet that the reverend was not one of those new age, more enlightened men of the cloth. Somehow he didn’t think Reverend Gabriel had any sort of live-and-let-live attitude about gay people.
“It’s good to meet you.” Reggie extended his hand, and Willy blinked, seeming to realize that his life wasn’t going to come to an end.
“You too, sir.” They shook hands.
“What do you do?” Reggie asked.
Reverend Gabriel cleared his throat. “William will be following in my footsteps. He and I have spoken at length regarding his future, and we have come to an understanding.”
William didn’t argue, but he didn’t agree either.
“Have a good day, Sheriff.” Father and son left the station, and Reggie turned to the others, who were all watching him with wide eyes.
“Is something wrong?” he asked the room, and they all immediately returned to their work, so Reggie went back to his office. A throat clearing nervously drew his gaze up from his desk. “Yes, Marie?”

“Umm.” She now had that scared rabbit look. “I have the memos done.” She handed them to him and looked outside the room. “You… I…. Well… I’m going to miss you.”
Reggie narrowed his eyes. “Where am I going?”
“He… the reverend… well, he pretty much decides what happens here. People listen to him, and so do the town leaders. They’ll fire you if he says so.” She quivered like a leaf. “And you were doing such good things here already.”
“Don’t worry, Marie. Nothing of the kind is going to happen. First thing, I’m very good at what I do and will build a competent and well-run sheriff department if I have to do it from the ground up. And second, I have a sister who is married to the governor’s son. I can get a message to Sacramento that will be listened to within the capitol faster than the reverend can pass out communion wafers. That’s part of the reason I’m here.” Reggie leaned back in the chair. “I never use that connection unless I have to, which is part of the reason it’s very effective when I do. So don’t worry.” He looked over the memos, approved them, and handed them back. “Please get them to everyone today. Thank you.”
One thing was for certain—no one was going to get away with bullying him.
“I will, and there’s a call that just came in.” She handed him the details, and he got up and left the office, heading out to the scene of an apparent motorcycle race.