Blogtour: The Academy by Quinn Anderson

Hi, everyone. I’m Quinn Anderson, and I’m here to share some behind-the-scenes facts about my latest release, THE ACADEMY. Stay tuned and comment on stops along the way for a chance to win a $10 Riptide gift card. 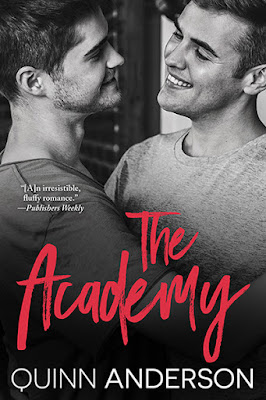 My Cat Kylo
If you follow my Twitter, you know I have a twenty-pound, all-black panther/cat named Kylo. And if you’ve seen the latest Star Wars franchise, you recognize that name! It belongs to the Sith antagonist of the series, Kylo Ren.
You might be wondering why I chose that particular name. I actually had it picked out as part of a list of potential names, before I even went to the shelter to adopt a cat. I knew I wanted a boy after a lifetime of having only female cats, but other than that, I was open. I didn’t care if I ended up with a cat that was white, gray, old, young, big, or small, so long as they were affectionate. I was sort of leaning toward getting a lil ginger boy, whom I intended to name Zuko, after Avatar the Last Airbender, but then I met Kylo! At the time, his name was Tyler, and I knew almost instantly that he was mine.


So, why call him Kylo? Because naming a black cat after a Sith Lord is precisely the sort of chaos I like to invite into my life, ha ha. Also, here’s a fun fact: Kylo wears a pink collar that has little white Storm Trooper helmets on it.

To celebrate the release of The Academy, Quinn is giving away a $10 Riptide gift card! Leave a comment with your contact info to enter the contest. Entries close at midnight, Eastern time, on September 22, 2018. Contest is NOT restricted to U.S. entries. Thanks for following along, and don’t forget to leave your contact info!