Audio Book Review: When Everything is Blue by Laura Lascarso 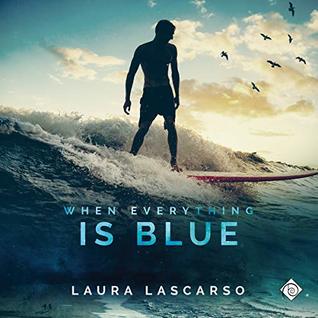 
When they were kids, Chris Mitcham rescued Theo from the neighborhood bullies and taught him how to “be cool.” Now, years later, Theo’s developed feelings for his best friend that arise at the most inopportune times. Theo hates lying to Chris, but in coming out, he might lose the one person who understands him best, a risk he’s not willing to take.

Young love...first love is there anything sweeter?

Probably not much for most people and in Laura Lascarso's 'When Everything is Blue' we are treated to an incredibly sweet story of first love.

'When Everything is Blue' is told from Theo's perspective and while I would have liked to having a bit of Chris's perspective as well, I have to admit Theo was one those characters whom I found to be adorably cute and for some reason I didn't find his brain to be a scary place so it was ok there and even after spending 7 hours listening to Theo's ramblings as he shared his story with me. I could have happily spent a bit more time with him.

Theo and Chris have grown up together as friends and neighbors and while the shift in their relationship was at times incredibly sweet, it was also at times incredibly awkward as I think most of us realize that first love can be, but for Theo and Chris as well as that awkwardness that comes from realizing that you love someone for the first time there's also the fear of losing a friend if things go wrong...not having that one person in your life anymore who you've always counted on and for Theo the very obvious reality that Chris isn't gay...because gay guys don't have girls all over them all the time, right?

Along with the confusion of first love neither of these boys have told anyone they're gay and for Theo this means coming out to a father who he's pretty sure will be less than loving and supportive. Fortunately his mother and his twin sister know what it means to be family...although I do have to admit Theo's sister does a pretty good self-absorbed, self-involved teenager impersonation or at least she does until her brother really needs here and then she shows that she has her priorities in order.

This one has all the angst and drama of the teen years and while it might have seemed over the top when it comes to adults...these are not adults that we're dealing with here and in spite of the fact that it's been 40+ years since I was this age, time has not diminished my memory of teen angst and drama and how easily it can happen and escalate.

'When Everything is Blue' is a cute, sweet and beautifully told story about coming of age and falling in love and I think for me what made it all the more enjoyable was the excellent narrations of new to me narrator, Michael Mola. I loved the expressiveness of his voice and the fact that the voices were varied and easily distinguishable especially Theo's voice. For me Theo's voice resonated as being that of a teenager which since Theo was exactly that worked perfectly and I found his voice to be delightful.

Since YA and/or NA are not strong preferences of mine I have to say this one was a big success with me and I really enjoyed it...definitely recommended especially for YA or NA fans...but be warned there is on page sex in this story...not a lot but it's there...so, consider yourself warned!

An audio book of 'When Everything is Blue' was graciously provided by the publisher in exchange for an honest review.