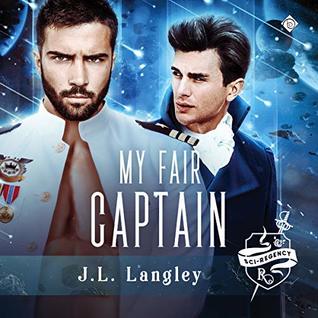 Talk about a compromising situation! A storm of political intrigue, murderous mayhem and sexual hungers is brewing on planet Regelence.

Swarthy Intergalactic Navy Captain Nathaniel Hawkins ran from a past he had no intention of ever reliving. But when his Admiral asks him to use his peerage, as an earl and the heir to a dukedom, to investigate a missing weapons stash, he’s forced to do just that. As if being undercover on a Regency planet where the young men are supposed to remain pure until marriage isn’t bad enough, Nate finds himself attracted to the king’s unmarried son.

All Prince Aiden Townsend has ever wanted was to be an artist. He has no interest in a marriage of political fortune or becoming a societal paragon. Until he lands in the arms of the mysterious Earl of Deverell. One look at Nate’s handsome face has Aiden reconsidering his future. Not only does Nate make a virile subject for Aiden’s art, but the great war hero awakens feelings in Aiden he has never felt, feelings he can’t ignore.

After a momentous dance at a season ball, Aiden and Nate find themselves exchanging important information and working closely together. They have to fight their growing attraction long enough to find out who stole the weapons and keep themselves from a compromising situation and certain scandal.

I have such a soft spot in my heart for this book. The first time I read this story was back in 2010...how do I know this well I remember the house we were living in when I read this and we moved there in October of 2009 and this was one of the first m/m e-books that I ever bought and I got it after Christmas so early 2010.  I know all this really has nothing to do with the story except that as I said I have a real soft spot in my heart for this book and this author.

Truthfully I could probably go through and make a laundry list of all the things that I shouldn't like about it...it's SciFi...so not my thing, it centers around a very patriarchal society...yep, there go women's rights, kids are genetically enhanced to prefer men in the royal families...can someone explain to me how that's even a thing? and then there's the names and I realize that several people have sited this as an annoyance in their reviews but as someone who came from a family of 7 kids let me just say off the top of my head I had no fewer than 3 names that I was called on any given day and that doesn't include those times when the parents ran down the list and threw in the cat and the dog's names for good measure, so it's really a matter of what you're use to for me the names really weren't an issue.  I'm sure there's more but my point is sometimes what shouldn't work does and for me this one worked.

Possibly because...it's SciFi set in an alternate reality so I get to leave my moral values at home. I mean this doesn't even take place on earth so why would I expect that the current values and morals of present day earth have anything to do with this world...they don't, part of what the author is doing here is creating an alternate reality so of course a lot of it not only doesn't line up with societal norms of our world but really why should it?

Along with the things that shouldn't have worked there are some things that made perfect counterpoints to them. Like the fact that it's the men who raise the children, oh sure they had nursemaids and nannies but that's not unusual for people with money and even better it's the virtue of the young men that needs to be protected in other words...'There will be no catting around here. These young men are to be pure and chaste upon their wedding nights'...come on is anyone but me laughing their ass off right now? I think it's high time that young men had to worry about their reputations...ok, I'll stop.

I found 'My Fair Captain' to be a delightful and entertaining wander into the world of SciFi that took me into an alternate world and made me consider how different things could be while telling me a story that had action, adventure and a bit of mystery and intrigue to keep me guessing about some things...things that don't totally wrap themselves up in this first book but the ending of this one is such that if you choose to leave it there you can. Personally, I'm game for the next book if it comes out on audio...I might have read the original series...2 or maybe it was 3 times...really who's counting?

Now as for the narration on this one...Joseph Morton is the narrator and while he's definitely not new to the world of audio books he is new to me. I can't say that he did a bad job because honestly he didn't but for whatever reason I just wasn't able to connect with his narration. I think it part it was because some of the voices weren't distinct enough while I had absolutely no problem understanding what was being read the voices just didn't enhance how I imagined the characters to be hence no connection be voice and character for me. I'm definitely not saying that this is a narrator I won't listen to again as it's very possible that with another story and different characters this would be a different audio experience for me. But for my first time listening to this narrator it just didn't work...maybe next time.

This one ended up being 4.5 stars for the story and maybe 3 for the narration, but I'm going to call it a day at 3.5 stars and hope that things go better with the next one.

An audiobook of 'My Fair Captain' was graciously provided by the publisher in exchange for an honest review.