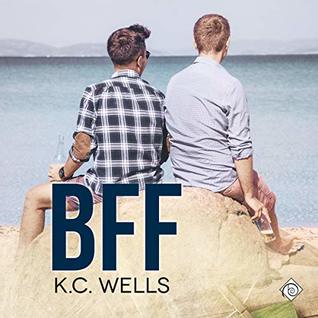 
I’m about to do something huge, and it could change... everything.

I met Matt in second grade, and we’ve been inseparable ever since. We went to the same schools, studied at the same college. When we both got jobs in the same town, we shared an apartment. And when my life took an unexpected turn, Matt was there for me. Every milestone in my life, he was there to share it. And what’s really amazing? After all these years, we’re still the best of friends.

Which brings me to this fragile, heart-stopping moment: I want to tell him I love him, really love him, but I’m scared to death of what he’ll say. If I’ve got this all wrong, I’ll lose him—forever.

I'm really, really torn on this one. I had moments where I really into the story and enjoying myself and then I had moments that bordered on total ambivalence and my brain started to blank out and go 'yeah, yeah whatever'.

For me this story was very reminiscent of Anna Martin's 'Five Times My Best Friend Kissed Me' or or Laura Lascaro's 'When Everything Is Blue'. While each story is told in the author's unique style the overall concept is similar life long friends to lovers and in each case the story is all at least partially told through flashbacks.

I'm sure there are a number of other that could fall into this group as well but ironically I listened to all 3 of these books on audio, 2 of them actually had the same narrator...this one and 'When Everything Is Blue' were both narrated by Michael Mola who did an excellent job of with the narrating as did Jesse Cota who narrated 'Five Times My Best Friend Kissed Me'. So I guess that's some of the reasons that the other two books came to mind while I was listening to the audio book of 'BFF'.

I think one of my biggest problems with this one was the fact that we've got two boys/men, Matt and David who meet as young children and become life long friends...so far I'm on board with this it's cute and I'm liking it. For the most part they grow up together and as the years pass their bond of friendship strengthens and again still on board here and things are making sense...I get lost with the whole fact that we have two young men who have grown up together. Spent a huge amount of time together but both claim to be 'straight' and neither seems to realize that the reason the never seem to have a steady girlfriend or want to go with girls is because they just don't really want to be with anyone other than their 'best friend'.


From an objective point the story was well laid out and there were a lot of really sweet moments...maybe, some of them were too sweet. I liked that both of these boys/men seem to have pretty awesome parents...this was nice and I enjoyed the lack of douchie parents...but maybe these parents were just a little too over the top sweet. For example there was this whole incident involving champagne when Matt and David finally admitted their feelings for each other that was just a little bit more sweet than I could swallow and while were a few other moments like this the champagne was the one that really stood out in my mind.

I had honestly expected that I'd like this one a lot more than I did, but that's not to say that I didn't like the story, it's more a case of I liked the story, I just didn't LOVE the story and honestly we can't love them all can we?

An audio book of 'BFF' was graciously provided by the publisher in exchange for an honest review.