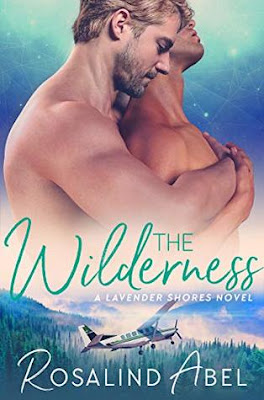 
Will Epstein had it all—playboy good looks, wealth and prestige, and a gorgeous fiancé to costar with him on a reality television show. But that was years ago, before he was abandoned at the altar on national television. In the aftermath, Will’s world crumbled, leaving him humiliated and lost.

Andre Rivera married his first love and lived a dream life until tragedy stepped in. His wife’s sudden death left him devastated and struggling to build a life for his young daughter. Being a pilot offers Andre a sense of freedom from Lavender Shores, but he feels trapped and unable to move forward.

A shared sense of loss fosters a surprising friendship between Will and Andre, giving them both the salvation they need. But when feelings cross the lines of friendship and secrets are revealed, Will and Andre have to confront their own fears.

Amid the gold of a Lavender Shores autumn, Will and Andre must grasp their chance at love… before it slips away.

Definitely read the sixth Lavender Shores book, The Glasshouse (Adrian and Harrison's story) before reading The Wilderness. Will, one of the MCs of The Wilderness, is Harrison's fiancé in book 6. He's ditched at the altar by Harrison after Harrison realizes he's falling in love with Adrian.

In The Glasshouse, I didn't feel sorry for Will, who came across like an arrogant, uptight fame whore. He cared more about his five minutes in the limelight than his future husband. But Will seemed to truly be devastated when Harrison ditched him.

This book opens just a few weeks after the wedding incident. Will is drinking himself into a stupor when he sees Adrian enter the bar. Will lashes out and punches the man he thinks stole his fiancé. Except he punches the wrong guy. Andre is Adrian's twin, and he becomes Will's best friend.

Fast forward three years, and Will and Andre's friendship is strong and steady. Will is in love with Andre, but Andre is oblivious and, uh, "straight" (as if such a thing were even possible in Lavender Shores).

I really disliked Will in the sixth book, but he was the more sympathetic character in this story. He is honest with his feelings and grows as a person. Andre, on the other hand, annoyed me. Still grieving the death of his wife many years later, Andre sleeps around with guys because sleeping with women would be a betrayal to Meghan.

When Will finds out, he's justifiably hurt. To put some distance between himself and Andre, he leaves Lavender Shores. It takes being apart from Will for Andre to pull his head out of his ass and see the light.

As per usual for this series, this is a very romantic story with plenty of steam and a HEA. The slow burn was appropriate; even though Andre and Will aren't together for that long in the story, I believed in their relationship because it had a solid foundation of friendship.

However, I'm not a fan of "dead spouse" stories. I'm sure Meghan was a wonderful person, but she was basically the third MC. I also didn't like the way Andre blamed Will for leaving when Will owed him nothing.

Some of the scenes set in Lavender Falls (like wise Pete philosophizing about relationships with Andre or Robert Kelly fawning over Will) felt scripted and expected (although I really liked the scenes set in Alaska at Will's brother's cabin). There was a twist at the end with yet another "sex tape" that I could have done without.

Also, the epilogue, while sweet, was vague. Any story involving Will should have ended with him not getting stood up at the altar. I was bummed that didn't happen.