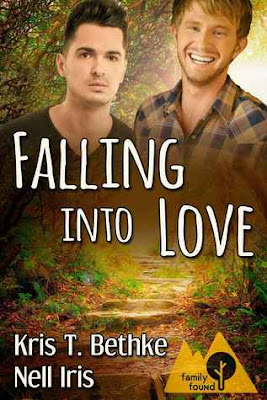 
Liam O’Donoughue is happy with his life. He runs V Wilderness Adventures with his best friends, his chosen brothers, and gets to spend his days hiking in the gorgeous Adirondacks. What’s not to love? But when he meets Austin on a hike, he thinks he’s found something he didn’t even know was missing.

I am all about relationship-focused stories, but Falling into Love was perhaps too simple.

Liam and Austin are 30 years old but act younger. Much is made of Liam being a klutz. He's a wilderness guide, but he's constantly tripping, falling, and spraining or breaking something.

This was supposed to be funny, but honestly I was slightly alarmed. If you're going to lead people on a hike through the forest, you need to be more cautious and safety minded. Liam was about the worst wilderness guide ever.

Austin is an X-ray tech (that's where he originally met Liam) and plays in a cover band. His best friend is his ex-girlfriend. Austin is scared of falling for Liam and moving too quickly.

There is a lot of butt wiggling and happy dancing, and Austin says things like, "Oh, poop" and "fudging." I found this supremely irritating and childish.

The relationship was all surface, and I never really believed in the connection between the men. Even the sexy times fizzled for me.

The first couple chapters served as an introduction to the series. Liam and his four besties run a wilderness company together. We have Liam, plus Drew and Ev and Jackson and Wade. I honestly couldn't keep them all straight.

This is a feel-good story. The MCs are nice, uncomplicated guys; there is a big focus on family you choose; and the ending is a tentative HEA.

I was antsy for the story to go somewhere, but it never did. I would still read the second book in the series; I'm fairly certain it will focus on Drew and Ev.