ARC Review: All He Ever Needed by Cate Ashwood 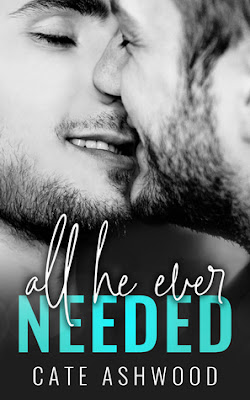 
Some secrets are too heavy to hold on to forever.

For Ethan, pretending has become second nature. After all, he’s spent the last decade pretending to be straight, pretending to be happy, and pretending he isn’t desperately in love with his best friend. But in a single moment of raw honesty, all those lies come crashing down around him and he’s left wondering what to do next.

When Jase learns his best friend is going through a breakup, his first instinct is to come to Ethan’s rescue, and he knows just the thing to help. The cabin where they spent summers as kids is sitting vacant, and a week there is the perfect remedy to start healing a broken heart.

In the seclusion of the mountains, long-buried fears and emotions take their friendship into unexplored territory that will either bring them closer together… or tear everything apart.

If you're in the mood for a gentle best-friends-to-lovers story with some scorching lovin' and a HEA, all you need is All He Ever Needed.

I like Cate Ashwood's writing. Her prose is fluid and accessible. The dual POV gives insight into each MC's thoughts, desires, and fears.

Ethan has been living a lie for years: in a relationship with his dear friend Allison but secretly pining for his his other bestie, Jase.

Jase is a firefighter. He's felt a pull toward men but not enough to do anything about it, not until Ethan confesses he's gay.

The men escape to Jase's uncle's cabin, a place they frequented as kids. They skinny dip in the lake and get lost in one another. When Ethan tells Jase the truth about his breakup with Allison, Jase realizes he wants Ethan as more than just a friend.

The lust strikes hard and fast, and the guys hit the sack at lighting speed, like a couple days after Ethan breaks up with his girlfriends of TEN YEARS.

Don't get me wrong; the sex is HOT, but it sort of rushed the relationship. I wanted a longer slow burn (and more steam toward the end of the book; the sexual tension peaked early on and fizzled out as the book progressed).

Once the guys leave the cabin, Jase freaks out about his bisexuality and starts avoiding Ethan. His on-again, off-again girlfriend makes an appearance. This was predictable. Eventually, the MCs do talk it out, and Jase stands up for his man.

I love friends-to-lovers stories, and Jase and Ethan's friendship was a beautiful thing. I had no doubt they could make their romantic relationship work because they already knew each other so well and had great chemistry.

I liked Allison, who was loyal and kind, probably more understanding than Ethan deserved. (Thank you, baby jesus, for no ex-girlfriend drama-llama.)

I wanted to know more about how the rest of the firefighters handled Jase having a boyfriend, but the ending was a solid HEA and quite satisfying.