Release Blitz: A Position In Paris by Megan Reddaway 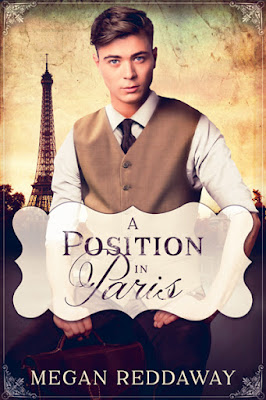 Paris, 1919. World War One is over, and wounded hero James Clarynton is struggling to face life without one leg, one eye, and the devilish good looks he had before the conflict. Now he must pay for affection, and it leaves him bitter. He’s filling the time by writing a book—but it’s the young man who comes to type it who really intrigues him.

Edmund Vaughan can’t turn down the chance to be secretary to the wealthy James Clarynton. He’s been out of work since the armistice, and his mother and brother depend on him. But he has secrets to hide, and the last thing he wants is an employer who keeps asking questions.

As they work together, their respect for each other grows, along with something deeper. But tragedy threatens, and shadows from the past confront them at every turn. They must open their hearts and trust each other if they are to break down the barriers that separate them.

A heartwarming romance with some dark moments along the way.


MEGAN REDDAWAY lives in England and has been entertained by fictional characters acting out their stories in her head for as long as she can remember. She began writing them down as soon as she could.

Since she grew up, she has worked as a secretary, driver, barperson, and article writer, among other things. Whatever she is doing, she always has a story bubbling away at the same time.