We're delighted to reveal the cover for A. Nybo's upcoming novel

At Three Bears surf break, the attraction between a group of friends is anything but “Luke warm….”

Dan goes to stay with his best friend Josh in Margaret River, the surfing capital of Western Australia, to sort out his sexual confusion. But his best friend is the source of that confusion. Having never been attracted to a man other than Josh, Dan fears risking their friendship just to discover men aren’t his thing.

Within the first few days, Dan meets Luke, a local barista who offers him surf lessons. Dan soon finds himself emotionally coveting not one, but two men. When they go to Three Bears, his hidden desires begin to emerge. As the ambiguity of Dan’s mixed signals clears, it becomes apparent both of his surfing companions want him—badly.

It is only when Luke and Josh hook up that they formulate “Operation Three Bears,” an adventurous plan that might lead to a satisfying outcome for all of them.

World of Love: Stories of romance that span every corner of the globe. 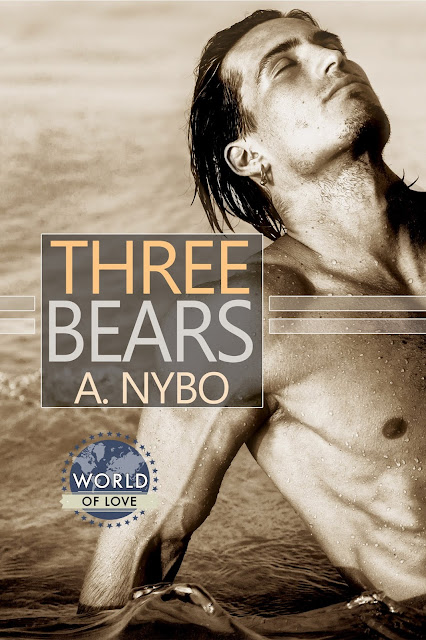 A. Nybo has tried conventional methods (a psych degree and a GC in Forensic Mental Health) but far prefers the less conventional, such as the occasional barbecue in the rain, four-hundred-kilometer drives at 1:00 a.m. for chocolate, and multiple emergency naps in any given twenty-four-hour period. Favorite things to do include that which can be seen (e.g. reading, writing, drawing, walking the dogs, traveling) and that which can’t, such as dreaming (both awake and asleep).

Western Australian born, she has been spotted on the other side of the planet several times—usually by mosquitoes. She’s also discovered Amazonian mosquitoes love her just as much as they do in her home state.