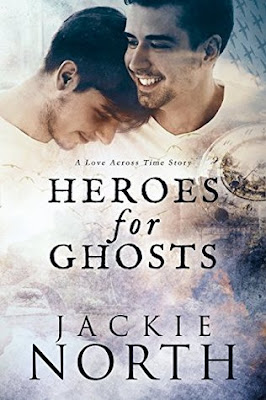 
Soulmates across time. A sacrifice that could keep them apart forever.

In present day, near the village of Ornes, France, Devon works on his master's thesis in history as he fantasizes about meeting a WWI American Doughboy.

In 1916, during the Battle of Ornes, Stanley is a young soldier facing the horrors of the battlefield.

Mourning the death of his friends from enemy fire, Stanley volunteers to bring the message for retreat so he can save everyone else in his battalion. While on his mission, mustard gas surrounds Stanley and though he thinks he is dying, he finds himself in a peaceful green meadow where he literally trips over Devon.

Devon doesn't believe Stanley is who he says he is, a soldier from WWI. But a powerful attraction grows between them, and if Stanley is truly a visitor from the past, then he is Devon's dream come true. The problem is, Stanley's soul wants to finish his mission, and time keeps yanking him back to relive his fateful last morning over and over, even as his heart and body long to stay with Devon.

Will Stanley have to choose between Devon and saving his battalion? Will time betray their love, leaving each alone?

This is a poignant story about second (and third) chances, friendship, and soulmates.

Stanley Sullivan dies on a battlefield in France. He's an American doughboy, one of the spirited young men who enlisted in WWI hoping for excitement and glory, never anticipating the brutality and futility of war.

Stanley's friends are blown to bits sitting right beside him (had they only moved to his left, it would have made all the difference). The radio, the battalion's sole source of communication, is shattered too. Stanley volunteers for a suicide mission. He knows there's no one left to miss him. As he lays dying, choking on mustard gas, he "resurrects" in 2018 in the same battlefield, except now it's a cemetery, and a scholar named Devon is there to save him.

But why does Stanley deserve to be saved when he couldn't save his fellow soldiers?

Devon, a graduate student working on his thesis, is obsessed with WWI, especially Stanley's battalion and the battle the Americans lost so badly. Devon knows no soldier survived, but he can't believe Stanley is truly a time traveler. Devon suspects Stanley is mentally unhinged or perhaps a liar, yet he's drawn to Stanley like a moth to a flame. He wants to hold Stanley and feed him oranges.

But Stanley can't accept Devon's love and comfort when he feels he failed his comrades. So he returns to the battlefield hoping to change the course of history.

Jackie North writes beautifully of the tenderness between the men. There's very little steam, but I didn't miss it. The men's relationship is based on a deep soul connection.

This is very much a love-at-first-sight kind of story. Stanley crosses the space-time continuum to be with Devon, and the men spend but a couple days together before falling in love.

The book doesn't get into the technical details of time travel. We're expected to believe, and I did.

The descriptions of the trenches, Stanley's longing to belong, and his relationship with his friends—particularly the charming Isaac—are heartbreaking. There is a thread of sorrow surrounding the story because war is always cruel, and no one ever wins.

The ending is at once solid and tentative. I think an epilogue was necessary considering the tenuous nature of Stanley's connection to the present. North kept it vague, but I needed more to truly feel the HEA. (Please know that this is probably just ME. I'm very practical and purposeful, and need details. Most readers will find the ending quite satisfying.)