Blogtour: To See The Sun by Kelly Jensen

To See The Sun 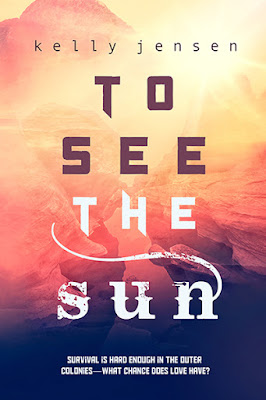 Survival is hard enough in the outer colonies—what chance does love have?

Life can be harsh and lonely in the outer colonies, but miner-turned-farmer Abraham Bauer is living his dream, cultivating crops that will one day turn the unforgiving world of Alkirak into paradise. He wants more, though. A companion—someone quiet like him. Someone to share his days, his bed, and his heart.

Gael Sonnen has never seen the sky, let alone the sun. He’s spent his whole life locked in the undercity beneath Zhemosen, running from one desperate situation to another. For a chance to get out, he’ll do just about anything—even travel to the far end of the galaxy as a mail-order husband. But no plan of Gael’s has ever gone smoothly, and his new start on Alkirak is no exception. Things go wrong from the moment he steps off the shuttle.

Although Gael arrives with unexpected complications, Abraham is prepared to make their relationship work—until Gael’s past catches up with them, threatening Abraham’s livelihood, the freedom Gael gave everything for, and the love neither man ever hoped to find.

Bram surveyed the terrace set aside for transport landings. It was too large for one man to tend without machinery, but standing at one end and gazing toward the other, he could picture neat rows of soybeans, a rice field with crisp green stalks, and maybe even stands of wheat reaching toward filtered sunlight.
A landing shuttle dropped into his vision. Scrubbing suddenly itchy palms over his thighs, Bram tried to remember how to breathe. In and out. Out and in—no, in and out. His head kept trying to lift off his shoulders, and his thoughts turned too slowly through the fish pond of his brain. The shuttle touched down on with a low, grinding hiss, and Bram practiced his smile.
A hand came out of nowhere to massage the side of his face. “Stop that, you look like a serial killer.”
He swatted Maia’s hand away. “What are you doing here?”
“Picking up some supplies. Your new suit filters should be in there, and those fancy drill bits.”
A genuine smile caught him. “Yeah? That was fast.”
“You got lucky. Deckard Station had just had a shipment when the Lennox passed by.”
After an interminable period of time—likely minutes, though each felt like a century—the shuttle hatch slid back and a ramp pushed out of the underside, extending in steps toward the ground. Bram rocked forward on his toes as a head poked through the door. He rocked back when the head was followed by a broad set of shoulders covered in the familiar brown and gold of a Muedini Corp. work suit. Bram had worn variations of the same thing for thirty years. Still had a few sets of utility coveralls in his closet.
Orfeo stepped out from behind the safety barrier and crossed the shuttle pad. No one landed on Alkirak without greeting the town mayor.
Eight similarly uniformed miners exited the shuttle, and then a curly head popped out. Bram couldn’t see his face from back here behind the safety glass, but the silhouette already seemed familiar. Probably because he’d watched every HV Gael sent more times than was sane. It was stupid to be this excited—no, nervous. Anxious? Sure he’d done something irrevocable. Which he had. You couldn’t ship someone from one side of the galaxy to the other without consequences.
Bram tried for another breath only to realize that his lungs wanted to perform the reverse function. Dusting hell, why had he done this? What had possessed him to buy a friend?
I didn’t buy him. I offered him a contract of service. It’s a mutual agreement.
“Aw, he’s just a baby!”
Bram shot Maia a scowl meant to push her through the ground. “Age don’t make a lick of difference out here. And he’s old enough to make up his own mind.”
She stubbornly remained atop the smooth concrete, smiling. “If you say so, hon. He sure is a looker. If it doesn’t work out between you two, I could find something for him to do. Or if he gets bored farming soybeans or picking up rocks or whatever it is you do out on your claim all day . . .”

Maia prattled on.
Bram tuned her out. Gael’s profile had listed him as twenty-nine Standard, so about eighteen years younger than Bram. Given a man could reach his hundred-and-twentieth birthday with all his faculties intact, it didn’t seem like such a huge gap. Or wouldn’t be by the time they got halfway there. If they got halfway there.
Gael reached the bottom of the ramp and was squinting toward the barrier. His features were still a little blurred by distance, but Bram could see the tense set of his shoulders and the furrow of his brow. Gael started forward, his stride a touch jerky, and passed under one of the landing lights.
He was beautiful. Just the same as in his pictures. Gael had definitely supplied a genuine likeness. That’d been him in the holos. His hair was a little longer and travel mussed, but his cheekbones were as high and sculpted. His eyes as large. His mouth—fantasies were born and lost to lips like those.
As he drew closer, Gael tried for a smile. Bram watched, transfixed, as Gael’s lips ticked up at the corners, twitched, and fixed. Rather than take offense, he was comforted. His companion—oh, holy hands—was as nervous as he was.
Then Gael was standing in front of him, duffel bag dropped to the concrete beside his feet.
Swallowing, Bram extended a hand. “Welcome to Alkirak.” 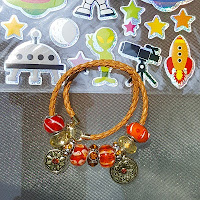 To celebrate the release of To See the Sun, Kelly is giving away a $25 Riptide credit and some swag stickers and a bracelet! Leave a comment with your contact info to enter the contest. Entries close at midnight, Eastern time, on August 18, 2018. Contest is NOT restricted to U.S. entries. Thanks for following along, and don’t forget to leave your contact info!