Blogtour: A Tangled Legacy by Mickie B. Ashling

Prince Colin of Sendorra would have been the spare instead of the heir if fate hadn’t intervened. Like his father and forefathers, Colin is expected to marry and father a child or his principality reverts to Spain at the time of his death. Filling the royal nursery with healthy babies seems easy enough until Princess Charlotte—his childhood friend and intended bride—breaks off their engagement.

Nobel Prize winner—and powerful gray witch—Alain de Gris isn’t looking for love. Science and research have taken center stage for years until he walks into a club and lays eyes on Colin, thirteen years his junior.

Bisexual by nature, Colin seeks to avoid another engagement repeat by shying away from a same-sex relationship. There are no acceptable alternatives to provide legitimate offspring if he follows his heart.

But Colin can’t stay away from Alain and the witch finds him irresistible. Ignoring the absolutes isn’t easy when a legacy is in jeopardy. And while magic may offer a solution, it could also create more problems.

Hi all! Mickie B. Ashling here. Thanks for giving me the opportunity to stop by and share an exclusive excerpt of my newest release, A Tangled Legacy. The idea for this novel started after I finished the prequel, Once Upon A Mattress, which was included in the Once Upon A Rainbow Anthology, Volume I. It was my first foray into the Sci-Fi/Fantasy genre, and I had so much fun I decided to write a longer piece. Although A Tangled Legacy is technically a sequel, I consider it to be a spinoff, and it can definitely be read as a standalone. The good news for those who are interested in reading the short story is that my wonderful publisher has decided to include it as bonus content if you purchase the paperback of A Tangled Legacy.


A Tangled Legacy
Mickie B. Ashling © 2018
All Rights Reserved


The royals find out about Alain and aren’t too happy. Errol’s POV.

Bash and I had always assumed our lad would be gay, and it had come as somewhat of a shock when he announced his feelings for Princess Charlotte. I’d been prepared to teach him everything I knew about growing up homosexual, but we’d never had that conversation. If Colin had ever been attracted to men, he’d chosen not to share this with us.
Which was surprising in and of itself. We would have greeted the news with alacrity, but since there had been no big reveal, we’d become complacent. Worrying about the line of succession was no longer necessary. This had been a secret fear of mine. After losing our first born, Andrew, I didn’t like the idea of another man being put in such an untenable position. Marrying into a royal family was difficult enough. Despite the advances in the last two decades, male pregnancies were still dangerous. I wouldn’t wish that fate on anyone, especially our son, but my fears had proven groundless.
Until now.
With this new development, Colin or his loved one would be at risk. I’d have to adjust my mindset and get back to being a nervous wreck.
Several hours later, Bash appeared with a folder in his hand. “I had him investigated.”


“That was quick.”
“It’s amazing what you can find once you know what to look for. Security got the man’s name from the club.”
I reached for the folder and skimmed the contents. After staring at the photo of a man who was clearly too old to be involved with Colin, I read the text and absorbed every informative sentence. I was stunned by the facts.
Looking up at Bash in horror, I exclaimed, “This man is thirty-three years old.”
“Correct,” Bash said. “I don’t care how many Nobel Prizes he has under his belt or how good-looking he is. Alain de Gris has no business sniffing around our boy.”
Blood rushed to my head, but I tamped down the urge to overreact. If I lost my composure, there was no telling what Bash would do. Once the paparazzi got wind of a scandal, it would be all over social media. “Let’s be canny rather than impulsive.”
“What did you have in mind?” Bash asked.
“Find out where he lives and pay the man a visit. We can’t make snap judgments based on Colin’s shenanigans.”
“Very mature, Errol. I’m shocked you’re not suggesting castration.”
“That’s always an option if I find out de Gris is a pedophile.”
“At least you have a backup plan,” Bash said ruefully.
I snorted.
“We should consider paying him off.”
“Now who’s being ridiculous? The man is accomplished in his own right. I doubt there’s enough money in the world to keep him away if he’s after an innocent like Colin.”
“Right,” Bash said succinctly. “There’s got to be something he wants. Once we find out, we can make him an offer he can’t refuse.”
“A bit premature, considering we have no idea what’s going on between the two of them.”
“Which brings us back to square one. We need to question Colin,” Bash insisted.
Out of habit, I reached into my pocket, fishing around for the cigars I no longer carried. “God, I need a smoke so bad. You wouldn’t happen to have an emergency stash, would you?”
Bash sighed. “No, but I know some people in high places. I’ll be right back.”
“Thank you, love.”


After Bash departed on his mission of mercy, I tried to analyze my feelings again. What if I was wrong and this person wasn’t a predator? Colin had as much right to find a love match as we did, and if that was with another man, then so be it. Except his current choice was in the wrong age bracket. This was a rebound affair, and Colin was asking for trouble. He’d sink into a deeper depression if Alain broke it off. Because it was a given. A successful guy his age didn’t need the long list of rules and obligations associated with a royal marriage. 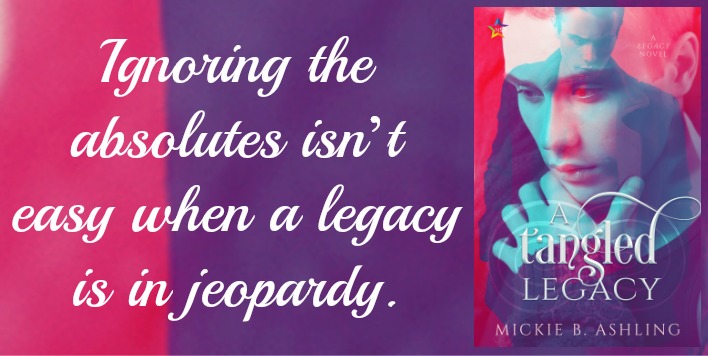 By the time Mickie discovered her talent for writing, real life got in the way, and the business of raising four sons took priority. With the advent of e-publishing—and the inevitable emptying nest—dreams of becoming a published writer were resurrected and fulfilled in April 2009.

Mickie discovered gay romance in 2002 and continues to draw inspiration from the LGBTQA community and their ongoing struggle to find equality and happiness in this oftentimes skewed and intolerant world. Her award-winning novels have been called “gut-wrenching, daring, and thought provoking.” She admits to being an angst queen and making her characters work damn hard for their happy endings.