“Just One Look,”
An Exclusive Excerpt from my alien abduction gay romance,

The moment when two lovers first meet can be life-changing. It was no different from Cole and Rory in Sky Full of Mysteries. Read on for an introduction to the two and understand why it was so tragic when one of them vanishes….

He sat heavily when he found an empty bench. He stared out at the pewter-colored water for a long time, letting his mind go blank. Because to think meant imagining things too horrible to contemplate.

When he did permit his mind to function again, a sliver of sun was emerging just above the water, and Cole allowed memory to take over. Just something sweet, something he could think about as a diversion—a way to escape the dread and fear that was eating into him.

The first time he saw Rory was at their gym.

They both belonged to the Bally’s in the Century City mall. It was a cruisy gym, and Cole ruefully thought of all the hookups he’d had as a result of being a member, one memorable one in the showers.

But when he’d been sitting on the abs machine that day not so long ago and spied Rory walking by on his way to one of the elliptical machines, very curiously, he didn’t feel lust. Not exactly.

Rory was almost comical. His shoes were all wrong. (Who wore an old pair of Sketchers leather bowling-style shoes to the gym?) He had on a pair of khaki Bermuda shorts and a Star Trek T-shirt. His reddish- brown hair was an unkempt mop, and his glasses screamed geek.

It was because Rory was so precisely the opposite of all the other pumped-up gym bunnies running around in their spandex and clinging nylon that he caught Cole’s eye. Some might say he looked pathetic, and Cole would have been inclined to agree. He’d also agree with those who might claim this doofus had never seen the inside of a gym, not only because of the ridiculously inappropriate attire, but also because of that skinny Ichabod Crane build. Behind the thick lenses of his glasses, Cole thought, was someone who looked completely lost.

But the urge Cole had upon seeing this stranger took him completely by surprise. He didn’t want to suppress a chuckle. He didn’t want to roll his eyes, as he saw a couple of other guys doing in the heavily gay club. He didn’t even want to maybe clue the guy in on a good pair of cross- trainers, Nike, maybe. Reebok?

No. He wanted to kiss him. Passionately. There was something so vulnerable and sweet about Rory that made Cole simply wanted to press his lips against Rory’s slightly puffy ones. He could imagine nothing more satisfying—not even sex.

He just wanted to kiss him. A kiss is never just a kiss.

Cole got up and followed him over to the elliptical, where he watched as Rory awkwardly mounted the machine and pondered its screen as though the words on it were written in code.

“Just press any one of the buttons to get the thing started.” Cole walked up beside Rory, heart hammering away, feeling a little flushed. He never felt this way when cruising other guys, not even when they were naked in the shower. He was always confident.

Maybe it was because he wanted to meet—no, kiss—this new guy so much that he was all flummoxed. Bamboozled. Atwitter. Maybe because these first few words were so important, determining, as they might, their whole future.

Rory regarded him, and Cole got his first look at that impish smile. And he was in love. Right then. Right there.

“What would I do without you?” Rory asked.

They ran into each other just outside the gym in Century City’s multileveled mall space, and since it was almost lunchtime, Cole invited him to ruin the effort of burning all those calories with a slice or two of pizza.

Now Cole stared out at the water, a horrible thought springing to mind. Are you in that water, Rory? Are its currents tossing you to and fro? Is your hair floating in its blue-green cold?

Cole shivered and stood up, banishing the thought from his mind. It was too horrible to contemplate.

The sun was full up above the lake now. It was time to go home and make some calls. 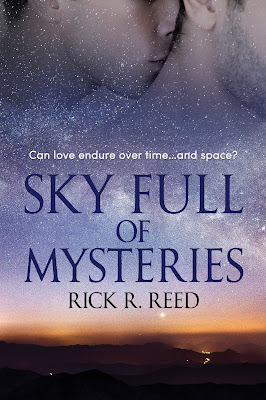 What if your first love was abducted and presumed dead—but returned twenty years later?

Where has Rory been all this time? What happened to him two decades ago, when a strange mass appeared in the night sky and lifted him into the heavens? Rory has no memory of those years. For him, it’s as though only a day or two has passed.

Rory still loves Cole with the passion unique to young first love. Cole has never forgotten Rory, yet Tommy has been his rock, by his side since Rory disappeared.

Cole is forced to choose between an idealized and passionate first love and the comfort of a long-term marriage. How can he decide? Who faces this kind of quandary, anyway? The answers might lie among the stars….

Rick R. Reed draws inspiration from the lives of gay men to craft stories that quicken the heartbeat, engage emotions, and keep the pages turning. Although he dabbles in horror, dark suspense, and comedy, his attention always returns to the power of love. He’s the award-winning and bestselling author of more than fifty works of published fiction and is forever at work on yet another book. Lambda Literary has called him: “A writer that doesn’t disappoint…” You can find him at www.rickrreed.com or www.rickrreedreality.blogspot.com. Rick lives in Palm Springs, CA with his beloved husband.