Hello and thank you for allowing me to visit and post at My Fiction Nook. I spend so much time in my own head writing a book that it’s fun to come up for air and talk about how the book came to be.
Shoulder Season started when someone told me that Dreamspinner Press was calling for submissions for a States of Love series and a Worlds of Love series. The idea of writing a location-based romance sounded fun, and although I was disappointed that my own state of Colorado had already been claimed, I was pleased to find that the country of Iceland had not been. I signed up very quickly and luckily Dreamspinner liked my story proposal, and we were off and running!
It has long been a dream of mine to go to Iceland, so it was a joy to dive into the research about this beautiful country. Although it might seem a bit daunting to live where the sun doesn’t shine for half the year, the health and the vitality of the landscape and the people is a huge draw for me. Every picture I see of the waterfalls or the coastline or geysers fascinates me even more, and I might be stereotyping the country a bit, but the whole of it looks clean, and cool, and inviting. 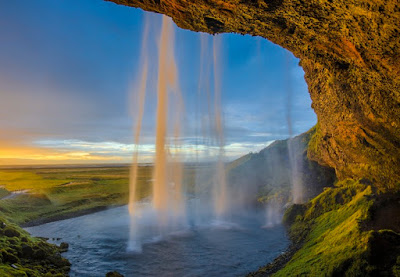 My goal was to write a story that took advantage of all that Iceland has to offer, and that would be a bit like a travelogue for the reader. I also decided that one of my characters, Ben, would be a tourist from the States, and that the other character, Solvin, would be a local. That way, when they went to get coffee or to buy an Icelandic sweater or to bask in the mineral waters at the Blue Lagoon, I would get both perspectives. 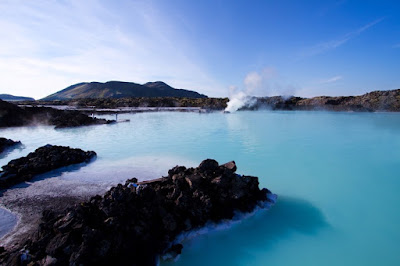 I wanted to make my characters typical but not too typical.
Ben was fun to work with because he’s a garage mechanic who’s not seen much of the world. At the same time, he doesn’t have any predisposition about Iceland, as he decided to go there on a whim after his icky boyfriend broke up with him. He’s happy to be anywhere, and is sort of a wide-eyed youngster experiencing life for the first time. Iceland, in return, seems to welcome him with open arms, even if he doesn’t speak more than three words of Icelandic.
Solvin, on the other hand, is a pretty typical Icelander: he’s well spoken, well educated, extremely good looking and healthy. At the same time, he’s a bit of a homebody who feels like maybe he’s missing out on the good life, as all of his friends have moved to the Continent. This leaves him pretty much isolated when he has a car accident that leaves him banged up and dependent upon a cane and arm sling.
What follows after their cute meeting is a happy journey through the best Iceland has to offer, beautiful views, hot mineral pools, pancakes with Nutella, long cab rides in the rain, and yes, truly good coffee. Ben and Solvin even go shopping for an Icelandic sweater for Ben, which is on every tourist list, I think. The only thing I didn’t have the characters do was to eat fermented shark! 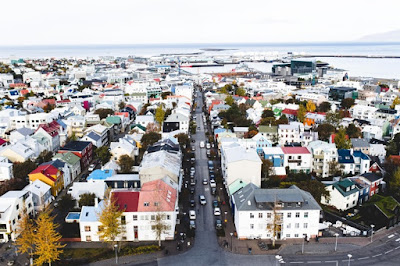 Writing Shoulder Season made me want to go to Iceland all the more. I know that I will enjoy the food and the people and the wonderfully clear air.
As for readers, I hope they will enjoy the healing journey that begins when Ben and Solvin meet, where both young men find not only solace in each other, but also a kindred spirit. (P.S. The story has a guaranteed HEA.) 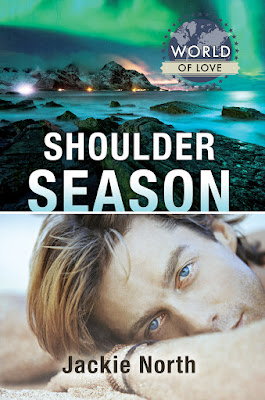 Two young men from two different countries find a common language as they recover from broken hearts and broken bones. Can they rebuild their lives together?

Jackie North has been writing stories since grade school and spent years absorbing the mainstream romances that she found at her local grocery store. Her dream was to someday leave her corporate day job behind and travel the world. She also wanted to put her English degree to good use and write romance novels, because for years she’s had a never-ending movie of made-up love stories in her head that simply wouldn’t leave her alone.

As fate would have it, she discovered m/m romance and decided that men falling in love with other men was exactly what she wanted to write books about. In this dazzling new world, she turned her grocery-store romance ideas around and is now putting them to paper as fast as her fingers can type. She creates characters who are a bit flawed and broken, who find themselves on the edge of society, and maybe a few who are a little bit lost, but who all deserve a happily ever after. (And she makes sure they get it!)

She likes long walks on the beach, the smell of lavender and rainstorms, and enjoys sleeping in on snowy mornings. She is especially fond of pizza and beer and, when time allows, long road trips with soda fountain drinks and rock and roll music. In her heart, there is peace to be found everywhere, but since in the real world this isn’t always true, Jackie writes for love.