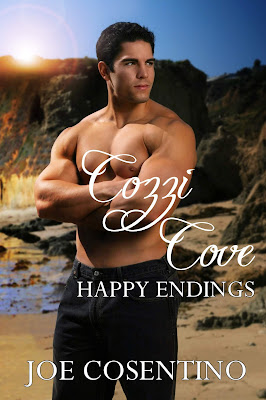 It’s summertime, the perfect season for another trip to Cozzi Cove: the magical place where nothing is what it seems and romance is always in the sea air. Welcome back to hunky Cal Cozzi’s seven guest bungalows on the New Jersey Shore.

This summer Cal is visited by Kevin Donovan, a handsome man from his past who makes Cal a tempting offer to buy Cozzi Cove and provide financial security to Cal and Michael’s baby.

As skeletons come out of their closets, the bears and cubs search for their true honey. Woodsy guest Nyx Oberon meets a sexy werewolf at the cove and they share a howling moonlit night. Nyx believes his newfound lover could be part of a much larger plan that would change his life and the world forever.

Will Cal, his family, and his guests have happy endings? It’s Cozzi Cove after all.


Carlos meant it. “I bet you’ll be a good nurse, Alfred.”
“Thanks. I’ll bet you’ll be a good personal trainer.” He smiled. “Do they have nude gyms?”
“Actually, they do, but my gym will be ‘clothing optional.’ Hopefully I can find a gym near a nude beach or a nudist colony.”
“Is that where you want to live?”
“Yeah. Being a nudist has a lot of benefits.”
“Like?”
“I don’t have to worry about pickpockets or hold out my hand to see if it’s raining.”
They shared a laugh.
“Besides, nudism is in my DNA.”
Alfred replied, “Your parents are nudists?”
“Just around the house.” Carlos slid to the edge of the rock. “Do you believe in past lives?”
Alfred shrugged. “I haven’t really thought about it.”
“You should. Knowing who you were in past lives tells you a lot about yourself. And it might help your patients too.”
Alfred perked up. “Do you remember your past lives?”
Carlos nodded. “Thanks to my cousin in Brooklyn. She’s a hypnotist.”
“She hypnotized you?”
Carlos nodded again.
“How?”
“By having me take rhythmed deep breaths and stare at a focal point. Then she asked me a bunch of questions and told me to verbalize whatever thoughts or images I saw in front of me.”
“What came out?”
“Nudism. So she took me back to uncover, no pun intended, where it all started.”
“Who were you, Lady Godiva?”
“My earliest reincarnation was Adam.”
“From the Bible?”
“Right. I had a blast running around the Garden of Eden in the buff.”
Alfred giggled.
“I’m serious. In my next life, I was Noah.”
“With the ark?”
“Ugh huh. How do you think I got all those people and animals to follow me inside?”
“You were the first streaker.”
They laughed.
Carlos continued matter-of-factly, “I was also Moses.” He winked. “Being well-endowed helped me part the Red Sea. Then I was John the Baptist. Tossing off my camel’s hair coat and walking naked into the Jordan River was how I attracted that big crowd. When they saw my body, they couldn’t wait for me to baptize them.” He tented his fingers. “I was also Plato. I had lots of fun running around naked at the Academy of Athens with Socrates and Aristotle. Oh, and my dick got caught in the wires when I invented the telephone.”
“You were Alexander Graham Bell?”


Carlos nodded. “And Benjamin Franklin. Feeling electricity running through my naked body under that kite was an intense experience.”
“Who was your last incarnation?”
“Richard Nixon.” He imitated the ex-president. “I am not a crook. I am a nudist.”
Alfred guffawed. “Interesting how your past incarnations were all famous people.”
“That’s because I’m special.” Carlos winked at him. “You seem pretty special too, Alfred. Hey, you should make an appointment with Carmelita to find out about your past lives.”
“I have enough trouble focusing on this life.”


So grab your Speedos, suntan lotion, and shades and head back to Cozzi Cove. I have a bungalow waiting just for you. I hope to see YOU there!

Post a comment about why you love the beach. The one that floats our boat the most will win a free audiobook of Cozzi Cove: Bouncing Back, the first Cozzi Cove novel, by Joe Cosentino, published by NineStar Press, performed by Chase Johnson.

Don't forget to include your email address so Joe can contact you.