Hi,
Thanks so much for having me on the blog.


Man, am I ready for vacation. I’m going to the beach. I have BEACH stretched across my calendar and all kinds of beachy designs. Which kept confusing me because I also had this book coming out and one of the main characters is also named Beach. It’s his nickname, but it suits his personality. He’s on a permanent vacation from responsibility when he meets Tai. I didn’t know this was going to be a book about a D/s romance. I didn’t know anything except that I wanted to tell a story for Beach. Somehow—and it was while I was walking on the beach on a different vacation—I suddenly knew that what Beach really needed was someone to tell him no. Someone who could make him fall in love with accountability. To himself. To responsibility. To a strong and loving Dominant. Beach, Tai and I were all surprised at how much Beach craved the high of being in sub space, and it was a lot of fun to tell this story. I hope you’ll enjoy this excerpt. 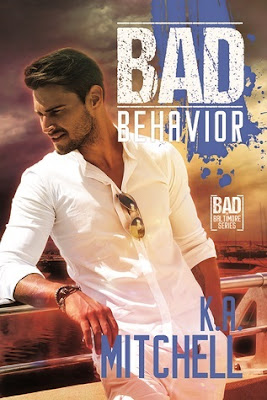 In a lifetime of yes, no is the sexiest word he’s ever heard.

After one too many misunderstandings with the law, wealthy and spoiled David Beauchamp finds himself chained to the city by the GPS and alcohol sensor strapped to his ankle. Awaiting trial, cut off from usual forms of entertainment, he goes looking for a good time—and winds up with his hands full, in more ways than one. The situation only gets more complicated when he’s summoned for a random drug test and comes face-to-face with the dominant man who took him for one hell of a ride the night before.

Probation Officer Tai Fonoti is used to handling other people’s problems, but he’s horrified when one of the extra clients his boss dumps on him is the sweet piece of ass he screwed the night before. It makes getting a urine sample a pretty loaded situation. Tai’s unique brand of discipline has Beach craving more. But while Tai relishes laying down the law in the bedroom, the letter of the law stands between them and kinkily ever after….


“Were you asking me if I like you?”
“Well, I know part of you does.” David reached through the slit, a gliding touch on bare skin.
“That’s an understatement.” Tai grunted and then choked off a gasp as David’s grip turned firm. Tai stuck his own hand between them and caught David’s forearm, careful to avoid the bruises on his wrist. Hauling him forward then wrapping him in a hug, Tai said, “Do you think I do this with just anybody?”
“I’m the guy from the bathroom at Grand Central, remember?”


“I do. And yeah. But that’s not what I’m talking about. I would never ask someone I didn’t like to be my submissive.”
“My, aren’t you a friendly guy to amass all that experience.”
“I didn’t say a submissive. Any more than I mean a fuck. I said my submissive.” Tai let a little of his Dom voice roll into that. Another gust sent the boat bumping back and forth in its berth.
David turned the motion to his advantage, grinding against Tai’s dick.
“And if you ask me what the difference is, I might not show you.” Tai moved his hands down to David’s ass.
He was smiling, but the hint of his tongue at the corner of his mouth suggested he wasn’t as cocksure as his throaty “So?”
Tai held tight to stop David’s motion, but that didn’t keep the boat from continuing to rock, a dissonance that made Tai’s stomach lurch. “Yes. My dick likes you. More importantly, I like you. And I want you to be my submissive.”
David’s body jerked, his breath sucked in fast and tight. “Okay.”
Tai squeezed David’s ass until he winced. “That’s not how you answer me.”
David bucked again, driving his cock against Tai’s. A good kind of rub to keep the pulse of arousal lasting forever. But they needed to get things clear first. David wanted boundaries, and Tai loved drawing them for him. He swatted David’s ass, mostly palm, but with enough force to make an impression through his deck shorts.
“Yes, Sir.” David rocked against him harder.
“Yes, Sir what?”
“Yes, Sir. I want to be your submissive.”
“No.”
David’s breath was short, ragged, his brow wrinkling under his hair.


“Yes, Sir. I am your submissive,” Tai clarified for him.

K.A. loves to hear from her readers. You can email her at ka@kamitchell.com. She is often found talking about her imaginary friends on Twitter @ka_mitchell. 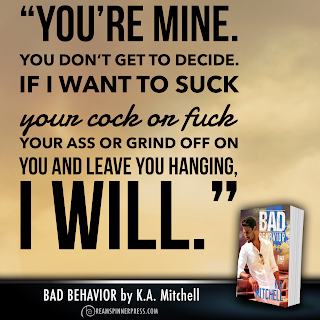