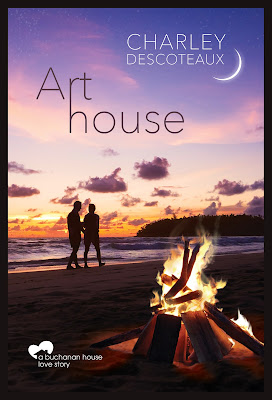 Chase Holland spends his days painting Portland scenes to hang in local businesses, neglecting his own surrealist style. After twenty-five years as a full-time artist, he’s frustrated that his career has stalled, but churning out the equivalent of corporate art is better than getting a day job. Chase and Garrett have been together—off and on, but mostly on—for a decade. If asked, they would both say the source of their trouble is the seventeen-year age gap. The truth is less clear-cut. Life would be so much easier if Chase could make a living with his own art, or if Garrett held less conventional ideas about relationships.

Garrett Frisch has been watching their friends get married for the past two years, and it’s taking an emotional toll. When he proposes as a way to keep them together permanently, he thinks he’s being responsible, but Chase is ambivalent and hurt and can’t hide it. It doesn’t help that Garrett’s anxiety is out of control and he’s dealing with insecurities about his own art career. They will have to do their least favorite thing—talk about something more important than which food cart to visit—if they are to get the happy ending they both want.

Hello friends! I’m so grateful to be visiting My Fiction Nook today—thanks for having me!
You may have heard that I’ve just moved into a new home—the first one I’ve ever owned. Over the past two months I’ve become someone who surfs Pinterest for flooring options and color palettes instead of hot men! *lol* I’m very happy in my new home, but also a little exhausted from unpacking boxes and moving furniture around. To make my life a little easier I’m sharing an exclusive excerpt instead of a guest post today—I hope you like it!
Stick around after the excerpt and leave a comment about your favorite color scheme for a room. Doesn’t matter which room it is—every room in my house needs painting so I need all of your ideas!
Every comment during my tour will be an entry in my giveaway. At the end of the tour everyone’s name will go into a hat and the winner will get a signed paperback of Art House, some Buchanan House and Dreamspinner swag, and a surprise or two. This giveaway is worldwide. 😊

This excerpt is from Chapter Seven. I thought it would be fun to share a scene with a little steam. 😉

Chase woke a half hour later feeling more rested than he had in the past two weeks of nights. And then realized he was alone in the large bed. He didn’t need to open his eyes to know that Garrett wasn’t lying beside him. His throat constricted, and in that moment, he thought he experienced true despair.
He rolled toward Garrett’s side of the bed, the sheet that might still smell like him, depending on how long ago he’d gone, and saw him. Garrett was sitting on the floor beside his easel, curled into a ball, hugging his legs and drawing on the wall near the floor. Beautifully nude. Garrett must have heard the rustle of the bed because his hand stopped.
“Are you tagging the bedroom wall?”


Garrett turned his head and rested his cheek on his knee. His smile warmed Chase to the marrow of his bones. “Sorry.”
“Finish it? I love watching you work.”
Garrett’s smile turned a touch shy and he resumed his work, not quite turning away to do so. Chase meant what he said about watching, but at the moment he couldn’t spare much energy for the actual content of said work. He was happy to lounge on the bed and watch the fine muscles in Garrett’s arm and shoulder, to draw his gaze down his lean torso and the curve of his delectable ass.
“You’re the most talented artist I’ve ever seen.”
“Am not,” Garrett answered quickly, with a smile in his voice. “You’re better.”
Chase sputtered out something that passed for laughter. “What? That’s crazy. I paint the equivalent of hipster advertisements. Corporate art.” Chase waved at the canvases in the corner nearest the door—views of Mt. Hood and Multnomah Falls and the Japanese Gardens in various stages of completion. He’d had more trouble than usual keeping his mind on a single canvas, but it didn’t matter much when the paintings were destined to hang in Puddle Jumper’s dining room to replace the ones purchased by tourists. He did like the two versions of the Portland Oregon sign, though: he’d replaced the words “Portland Oregon” on the iconic sign with the name of a local band on one, and a popular microbrewery on the other. At least they’re different.
“Just because you do that, doesn’t mean that’s all you can do.”
Chase scooted to the edge of the bed, arm hanging over the side. To get a better look, to watch Garrett work. At first his drawing had looked like the kittens, and they were at or below child height. But that’s not what they were. Garrett was drawing two men having sex. At least that’s what it looked like before he scooted in front of it. The smile he flashed back at Chase was wonderfully naughty, so it might be.
“Don’t look at it.”
“Are you getting up?”
Garrett nodded without checking to see that Chase was watching.
“Okay.” It didn’t take much effort to keep his eyes away from the wall. Not when Garrett stood and turned around. Every time Chase saw Garrett’s nude body he was blown away by his clear, fair skin, the dark auburn hair on his chest, stomach, and legs, his perfectly proportioned and uncut cock. Many times he’d bitten his tongue to keep from asking why Garrett hadn’t been circumcised, whether it was for the same reason he hadn’t been. Chase wanted to know but also didn’t, about equally. Sure, the seesaw tilted in either direction on different days, but never far enough to prompt the question. He didn’t want to know if Garrett had also been too sick when he was born for anyone to worry about something as insignificant as a circumcision, any more than he wanted to field the same question turned back on himself. More because of what it might lead to than the actual content of the answer.
Chase thought Garrett would come back to bed, but he went toward the easel.
“Is this what I do to you?” Garrett’s voice sounded clogged with emotion. Not all of it sad, but enough.
“No. What? It’s—”
“It is.” Garrett turned and looked at Chase for a long moment. After a quick glance back at the canvas, he knelt beside the bed at Chase’s head. “It’s beautiful, but it flays me. I don’t want to make you sad.”
Chase had been watching Garrett’s mouth—he loved Garrett’s mouth, the perfect asymmetry of it, with his full bottom lip and thinner, bowed top lip, not quite a Cupid’s bow but close—but when a tear skated past one corner, he looked up into the beloved smoky hazel gaze. He wanted to protest but couldn’t find his voice the first time he tried. He extended a hand to Garrett, an invitation to return to bed. “It’s only a landscape.”
“I know you’re not trying to tell me a landscape can’t be sad.”
“No.”
Garrett crawled up onto the bed and on top of him. As he came, Chase rolled onto his back, reveling in the familiarity of Garrett’s movements and the confidence behind each one.
“You make me feel everything. Before I met you, that would have been a desert.”
“You’re exaggerating.” Garrett stretched out on top of Chase, kissing his collarbone and his throat, rubbing their bodies together gently, almost reverently. “Your work was so evocative.”
“No. It’s true. I thought I felt things, but the moment I saw you, I knew it had all been a lie. A fake.” Chase forced himself to stop. Even if it were true—and it was; before he met Garrett he hadn’t known what it felt like to love someone so hard their happiness, their life, was more important than his own—he didn’t want to seem pathetic. He pulled Garrett into a hug, and they just lay in each other’s arms for a long moment.