Audio Book Review: Beneath This Mask by Victoria Sue 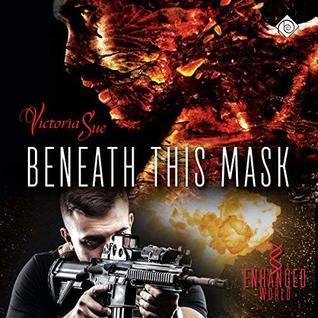 Gael Peterson has spent years hiding behind the enhanced abilities he wears like a mask, even though he is an important, confident member of the FBI’s exclusive H.E.R.O. team. The hurt and betrayal of his mom’s abandonment and his father’s fists are secrets buried deep beneath the ugly scars on his face, and he doesn’t trust Jake, his new regular human partner, with any of them. In a world where those with special abilities like Gael’s are regarded as freaks and monsters, it won’t be easy for him to rely on Jake to have his back, especially when the abilities of a vulnerable, enhanced, nonspeaking child make that child a murder suspect.

Racing on the thunder and rising with the heat...
It's gonna take a superman to sweep me off my feet...I need a hero...

"Beneath the Mask" is the third book in Victoria Sue's 'Enhanced' series and while we met the whole team in the first and second books this third installment takes the focus away from Talon and Finn to give us a look at enhanced team member Gael Peterson and his human partner Jake, bur that doesn't mean that readers should skip the first two books...trust me you really don't want to do that because both of these characters are introduced in the the first two books in this series along with the other members of the H.E.R.O. team.

Things aren't going to be easy for Gael and Jake and when they get thrown together I'm pretty sure that neither man would have anticipated they'd ever manage to be working partners much less have anything more personal between them.

As the team gets drawn into an investigation involving the deaths of enhanced humans and the evidence points to a child who may be an enhanced it doesn't mean he's not also vulnerable and Gael becomes determined to champion the young child...determined that he's not only innocent but in danger as well. What Gael doesn't count on is the fact that the real murderer has their sights set on Gael and the person that Gael trust the least it the person that he may need the most.


Gael's got a less than happy past but that hasn't kept him from becoming a compassionate and gentle soul who absolutely melted my heart. While Jake won me over with his determination and loyalty to the members of H.E.R.O. and in particular to Gael in spite of Gael's rather prickly nature towards him.

Jake knows that as a former member of the Police ENu (ENhanced unit) and a past that he'd rather not have people find out about, Jake's not expecting to have an easy time of things and he's both willing and determined to make things work as a regular member of the H.E.R.O. team.

I loved the mystery/thriller/adventure aspect of this story and while I had my suspicions as to 'who done it', it wasn't until towards the end that things were confirmed for me and the ending...wow! just wow! the ending of this story was a nail bitter and I don't bite my nails!

I loved the glimpses we got of Talon, Finn and the other team members and can't wait to find out who's story is next and if it was more Gael and Jake, I can honestly say that won't upset me in the slightest. This pairing was superb. I'm not even sure when it happened but Gael and Jake ever so smoothly slid from being interesting and likable to a pairing that I want more of because for me they just worked. I think it was the fact that initially they just didn't click and it took time for them to find that connection, especially for Gael but when it happened it worked for me and I was all in.

The icing on the 'enhanced' cake for me was the narrator...Nick J. Russo. I adore his audiobooks and without fail his narration works. He's on of my very short list of narrators whom I don't need to check out the audio sample before getting a book I just need to decide if it's a book that I want to listen to. Although this book was pretty much a no brainer...a series that I love, a narrator who's at the top of my list...so how could I loose? I couldn't...see...no brainer and very much recommended.

An audio book of 'Beneath This Mask' was graciously provided by the publisher in exchange for an honest review.