Release Blitz: Smoke in the Mirror by Aimee Nicole Walker


Memphis Sullivan thought he was coming to Blissville to help his cousin out, but instead, he gained three meddlesome females, a tribe, and a permanent home. More than a year later, he owns a popular comic book and vinyl record store and doesn’t think his life could get any better. That all changes when the star of his favorite television show and bad-boy fantasies rides into town and spices up his vanilla world.

Lyric Willows’ decision to visit an old friend in Blissville will change his life in ways he never dreamed possible. The paranormal investigator is immediately drawn to the mysterious disappearance of the town’s founder in 1850 and rumors that his former home is haunted. More alluring to Lyric than the history of Bliss House is the immediate connection he feels to the adorably geeky owner of Vinyl and Villains, who also happens to be his friend’s cousin.

Lyric becomes Memphis’s houseguest when he decides to stay in town to conduct a paranormal investigation. Tight spaces lead to sexy encounters, and before long, ghosts aren’t the only things that go bump in the night. The more they unravel about Anthony Bliss’s disappearance, the more tangled in one another they become. How is it possible for two virtual strangers to feel like they’ve known each other for their entire lives? Was their love written in the stars, or is it nothing more than an illusion?

Smoke in the Mirror is the fifth book in the Road to Blissville series. Each book can be read as a standalone book or part of the series. This book contains sexually explicit material and is intended for adults 18 and older. 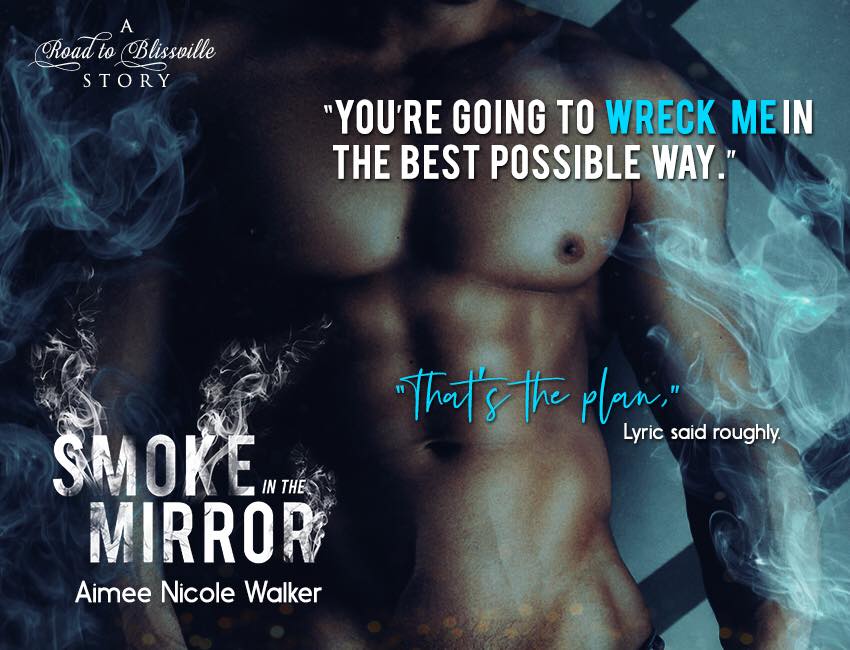 
“Any ideas where I should start?” I asked Maegan.

“The attic,” they all responded.

Aiming a crooked smile at Memphis, I said, “Sounds like we have a date with an attic.”

All I could think about was being alone with Memphis long enough to claim the kiss I’d planned to give him in his office. The rest could wait until we were alone at his house, but no living or dead person was going to keep me from kissing Memphis up in that attic. Regardless of his blasé comments earlier, we needed to have a conversation before I got him naked. Lust made you bolder, but it also made you the ultimate rationalizer. I didn’t want Memphis to compromise anything to be with me, because I wouldn’t change my mind. No matter how good sex would be between us, I wouldn’t wake up the morning after wanting to live a happily ever after with him.

“I’m ready,” Memphis said as he rose to his feet.

“Unless you want someone to hold the video camera on you…I mean, for you,” Andy offered. I looked over in time to see Milo jab him a good one with his elbow, making all the air in Andy’s lungs whoosh out of him. “Never mind,” he squeaked.

I exchanged a smile with Memphis. “We’ll be back in a bit,” I told them.

“You guys have serious issues,” Memphis said then left me standing there by myself. It felt like I was standing in front of the firing squad, which wasn’t too far off the mark if Memphis wasn’t being honest with me and ended up hurt by my inability to give him more than sex.

“Um…yeah,” I said then hurried after him, only stopping long enough to grab my bag of equipment before heading up the grand staircase. I caught up with Memphis just as he reached the top. I set my bag down and he spun around and faced me. I backed him up until I had him pinned between me and the wall then lowered my head until my lips hovered above his. “I don’t think I can wait.”

I fucking knew it was a mistake to give in to temptation, but I’d never wanted anyone as much as I wanted him. I couldn’t live the rest of my life without knowing if his lips were as soft as they looked. I would never kiss another man without wondering if Memphis tasted better. Kissing him might ruin me for everyone else, but it was a risk I was willing to take. Correction: had to take.

I am a wife and mother to three kids, three dogs, and a cat. When I’m not dreaming up stories, I like to lose myself in a good book, cook or bake. I’m a girly tomboy who paints her fingernails while watching sports and yelling at the referees. I will always choose the book over the movie. I believe in happily-ever- after. Love inspires everything that I do. Music keeps me sane.