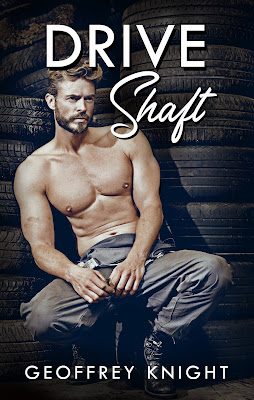 Jensen Rivers wasn’t looking for trouble. As the new kid on the block at Clyde’s Body Shop, all Jensen wanted was a job, a place where he could put his head down and ass up.

But Dean ‘Hutch’ Hutchinson plans on getting more than just Jensen’s hands dirty. Reckless and arrogant, drenched in sweat and dripping with a masculinity that cannot be tamed, Hutch is determined to claim victory over his new work colleague – both physically and sexually.

Will Jensen risk everything to find the love trapped behind Hutch’s fearless façade? Will Hutch bury the secret tragedy of his past before he throws away his last chance at a future? Will the dangers that confront them both be enough to tear them apart… or bring them together forever? 
Jensen’s chest was smooth and brown, his back broad and wet with perspiration by the time he’d removed the Maverick’s radiator and replaced it with the new one. His blond hair had turned to mud-honey with sweat while he took down the leaning tower of tires and built a new, sturdier tower out back. Every now and then Hutch would roll out from under the car he was working on and pretend to look for a different tool, just to steal a glance at Jensen as he lugged the tires with his bare hands, sometimes three or four at a time, his biceps shining, veins straining.

When Jensen didn’t return after the last trip out back, Hutch got suspicious.

Outside, Jensen’s wide glistening shoulders drank up the hot sun. His right shoulder caught a bright flash of sunlight as he flung the last tire on top of the solid stack he’d made. He wiped the sweat from his brow with his forearm and left a murky streak, then something else in the yard caught his eye.

Over by the side of the auto shop, sitting on a second driveway behind an old pick-up truck, was a car.

Correction, it was a car concealed beneath a snug-fitting tailor-made car cover.

Jensen’s curiosity got the better of him and he wandered over. He squatted by one of the front tires, only able to see the bottom half of its gleaming black surface and sparkling alloys. Jensen smiled approvingly without even knowing it and murmured to himself, “Michelin Pilot Sport 2. Nice.”

The Michelin instantly gave him a pretty damn good idea what was under the cover and he couldn’t wait to see the rest.

He unfastened the clips on the front driver’s side and began to unveil the beauty beneath, getting the briefest glimpse of royal blue before—

“What the hell do you think you’re doing?”


Jensen let go of the cover. It parachuted back down over the hood of the car as he spun about to see Hutch glaring at him, coveralls still hitched low, leaving plenty of room for his scuffed hands to grip his hips, fingers hooked on his deep-etched obliques. And that tuft of pubic hair was still visible, just, where his coveralls hung loose and open.

Jensen felt light-headed, maybe it was the heat, but right now he wanted to reach inside those coveralls and lift out whatever was hiding underneath just about as much as he wanted to lift that car cover.

“I was…I couldn’t help myself…I was just kinda curious about what’s…under there.” He didn’t realise he was still looking at Hutch’s crotch.

Hutch followed his gaze down and couldn’t help but smirk. “Are you talking about my car or my cock?”

“The car!” Jensen snapped his gaze straight back up to Hutch, then suddenly realized he couldn’t look the grinning, gorgeous mechanic in the eye and spun about to once again gaze distractedly at the covered car next to him. He blurted nervously, “If I ain’t wrong it’s a fourth generation Dodge Viper coupe. 6-speed transmission. Triple first-gear synchronizers and doubles for the higher gears. Zero to a hundred miles in 7.8 seconds. Clocked at speeds faster than the Corvette Z06 and the Porsche 911 Turbo with a record of 202 miles per hour.”

Hutch raised one eyebrow, somewhat impressed by the kid’s knowledge, then corrected him. “7.6. She does zero to a hundred in 7.6 seconds. I’ve timed it myself.”

Hutch crouched down, took the corner of the car cover in his hands and began fastening the clips. The coveralls sat even lower from behind, sliding down to reveal the top of his round hard ass cheeks and the slit of his crack. Jensen watched a trickle of sweat run down Hutch’s spine and glisten in his ass crack.

“Please can I see?” he pressed.

Hutch stood and stepped close to face the blond Texan.

Jensen could feel the heat coming off Hutch’s warm skin, smell the sweat from his chest and armpits. It was sweet. Intoxicating. Jensen felt light-headed again and shuffled his feet a little wider to steady himself. He took a deep breath.

Suddenly Hutch jabbed his finger into the dead center of Jensen’s chest and held it there, buried in the valley that ran down between the Texan’s pectoral muscles. “You want me to show you what I got? Then bring it. Tonight, you and me shut up shop, then it’s you and your little Vespa versus me and the Viper.”

“Whatever.” Hutch slid his finger slowly down Jensen’s pecs, zigzagging from one to the other.

Geoffrey Knight is the author of more than 30 gay fiction novels, novellas and short stories, ranging in genre from gay adventure, gay romance, gay suspense and gay comedies. He is the recipient of two Rainbow Awards including Best Mystery Winner and Best Overall Gay Fiction Runner-up. His work has been featured in several anthologies including Best Gay Erotica 2013, and he appeared as Guest of Honor at the inaugural Rainbow Con in Florida, 2014.

Geoffrey has worked in advertising, politics and journalism, but nothing is as fun as telling stories. He lives with his partner, their baby daughter, two dogs and two cats in a rambling old house in North Queensland, Australia, where the paint is fraying and life is good.