Thank you to My Fiction Nook for hosting me today during my book launch celebration for Twice Bitten. This books features Danny Reynolds, a man who's had some pretty bad experiences with vampires and Kieran McCade, the vampire whose heart Danny broke. Today, I'm giving you a sneak peak into their world with this exclusive excerpt.

Excerpt:
Kier stood in the shadows of the hallway and studied Danny as he worked. It still rattled him to have Danny back in his life. In all this time, the lithe blond man with the striking brown eyes still managed to take up a remarkable amount of his mental real estate. With his hair disheveled and his cheeks a touch flush from exertions and irritation, he reminded Kier of how he’d looked after their first kiss. Don’t go there. Don’t pick the scab. Try as he might, he couldn’t manage to fend off the memory of Danny with hair tousled from Kier running his fingers through it, pink, kiss-swollen lips, shirt open revealing a firm, smooth chest. His eyes shined as he wrapped his arms around Kier and pulled him close. He’d been all but drunk off the taste of Danny, and he’d never wanted to sober up. Kier fought for breath under the weight of the memory. He reached up and rubbed at the ache in his chest.
Glutton for punishment, he went back to watching Danny as he moved through the room chatting with patrons and never noticing the odd looks he got from some in the crowd. Chances were people either knew of their past relationship or they caught Danny’s not-quite-a-vampire scent.
“Still think you know what you’re doing?”
Kier jerked. He hadn’t noticed Alex leaning in the stockroom doorway, arms crossed and a frown on her face.
“Jesus, Alex. Make noise next time.”
“A whole drum line could have paraded around you and you wouldn’t have noticed. You were too lost in the box full of drama currently cleaning up your main room.”
“He’s only here because he needs help. What do you want me to do, turn my back, leave him to fend for himself in a world he knows nothing about?”
“Kier, come on. It’s me. I know you. I saw what Danny’s leaving did to you. Why would you open yourself up to it again?”
“I’m not. I’m just helping him.”
Alex snorted. “You keep telling yourself that. Maybe one day we’ll both believe it. That wound has just barely scabbed over, and now you go and pick it. I get it. You’re a good guy and you can’t leave a friend in need twisting in the wind, but what about you? Who’s going to look after you?”
“That’s what I’ve got you here for.” Kier lightly bumped shoulders with Alex.
“You know I’ll always be here for you, but you’ve got to help me out. Tell me honestly, is he going to stay this time?”
Kier closed his eyes, swiped a hand down his face. “I don’t know. It’s complicated.”
“Are you going to turn him?”
“Only if I have to. This condition of his may leave me with no choice.”
“Do you know if he even wants to be turned? What if he’d rather die than live as a vampire?”
The thought stole his breath, made his chest tighten. Alex put a hand on his shoulder. When he met her eyes, she gave him a knowing smile. Even if he wasn’t ready to open himself up to Danny again, Kier didn’t know how he’d face a world without him in it. Once upon a time Kier thought he’d shared a link with Danny. He thought they’d be connected in every way, mind, body, and soul. Something deep inside clenched at the thought of that never happening. No matter how hard his head resisted, a small piece of his heart still longed.


“I don’t know if I can give him that choice. I can’t stand by and watch him die when I can do something about it, and considering how he feels about vampires, that would be it for us. He’d hate me for eternity, but at least he’d be alive.” Kier squeezed his eyes shut. 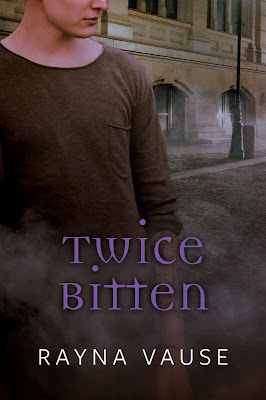 With a new species of vampire stalking the streets, the stakes are high. But that’s not the only reason hearts are on the line.

Danny Reynolds thought Kieran McCade was the one—true love and hot lust forever—until Danny found out Kier’s bloody secret and ran away screaming. Months later, Danny is facing his own paranormal crisis, and he needs Kieran’s help, but are there enough ways to apologize for breaking a vampire’s heart?

Nothing about Danny’s transformation is normal—not the attack that led to it, and not the symptoms Danny’s plagued with—but being in close proximity to Kieran is even worse than becoming a thing that goes bump in the night. Danny and Kieran aren’t the only things threatening to bump each other off, though. Secret organizations and clashing vigilante agendas want to get their hands on Danny. His only hope is to find a fix for his problem before he’s either captured or his abnormal transition starves him to death.

Danny and Kieran might have a real chance to repair their broken romance… but only if they keep Danny alive!

Rayna Vause is a lifetime learner who wants to live on a Disney cruise ship travelling the world and thinks purple should be considered a natural hair color. She’s fascinated by the magic and mystery in the world; things like psychics, demons, cats (especially cats!) and true love. A proud geek, she injects some of her science and tech-obsessed soul into every story she writes. When not writing she’s pursuing another degree, running a conference, working through her massive TBR pile, losing herself in a video game, and plotting her next novel.