Blogtour: Stranger In A Foreign Land by Michael Murphy

Stranger In A Foreign Land 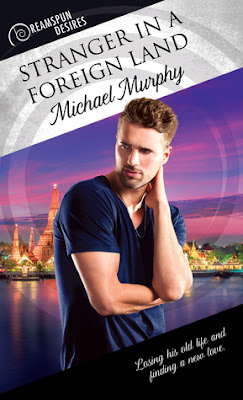 After an accident stole his memory, the only home American businessman Patrick knows is Bangkok. He recovers under the tender ministrations of Jack, an Australian ex-pat who works nights at a pineapple cannery. Together they search for clues to Patrick’s identity, but without success. Soon that forgotten past seems less and less important as Jack and Patrick—now known as Buddy—build a new life together.

But the past comes crashing in when Patrick’s brother travels to Thailand looking for him… and demands Patrick return to Los Angeles, away from Jack and the only world familiar to him. The attention also causes trouble for Jack, and to make their way back to each other, Patrick will need to find not only himself, but Jack as well, before everything is lost….

What would you do if one day you “woke up” to find yourself in a catastrophic car crash?  With no memory of how or why you got there, you’re crashing around unrestrained inside an old car as it is hit by several others and then careens off the road and down an embankment, rolling over and over along the way.

As flames lick at the broken body of the cab, your only concern would be to get out!  Get out now! To hell with anything else, just get out before it explodes. American business traveler Patrick finds himself in this situation, but with one major problem:  he doesn’t know who he is, how he got there, or even where “there” is!

Tearing his clothes, his jacket with his wallet, leaving behind his briefcase with his passport and his cash, Patrick frantically wriggles out through what used to be the back end of the cab.  He might not know who he is, but he knows he has to get away before the fire spreads and it gets worse.

Barely a few hundred yards away from the burning vehicle, Patrick is knocked to the ground when the gas tank of the cab explodes, sending pieces of the vehicle into the air to rain down over the entire area.  Too close, Patrick does all he can think of doing – tucking and making as small a target as possible. Scalding hot debris, some of it burning, rains down all around him.

When it’s safe, he’s back on his feet and running again, desperate to get away, to get far, far away. Exhausted, terrified, system overwhelmed with adrenaline, his primitive flight response takes over and he runs, regardless of his injuries or condition.  He runs, and runs, and runs until he can’t run anymore – and until he’s even more hopelessly lost than he was before.

Used up, he collapses and tries to pull himself together. Taking a quick inventory of himself and his surroundings, he realizes he doesn’t know who he is, where he is, or why he’s even there.  The road signs are illegible, it is beastly hot, and he could kill for a drink of cold water, or for something to take the pain away from the burns on his hands.

Feeling more fear than he could imagine ever feeling before, Patrick is a very lost man in a Stranger in a Foreign Land.

THE WHEELS of the fully loaded 747 jumbo jet slammed down onto the runway in Bangkok, as rough a landing as the flight had been. Despite the jarring touchdown, Patrick had a sense of overwhelming joy for the fact that this leg of his trip was nearly over. Perhaps it would be more appropriate to say he felt the anticipation of impending great joy, because otherwise he felt like day-old dog crap.
Every time Patrick made this flight, he told himself he would never again subject himself to the ordeal. Surely he would remember before agreeing to another such trip that flights that lasted more than twelve hours were killers. But every time, he forgot and agreed once again to make the long haul halfway around the world.
This time—with God as his witness—this time would be different, he told himself, as the plane that had moments before so gracefully glided through the air, now lumbered across the taxiway, swaying as it made its way slowly to the terminal.
This trip had included the added misery because he’d waited too late to book his ticket. His work in London had taken longer than originally budgeted, so he’d had to postpone his departure for Bangkok. When he’d finally been able to leave London, all the first-class and business-class seats for the flight from London to Bangkok were gone. Although he wanted to pay to sit up front with more room so he could work—maybe lie back and sleep for a while—he was relegated to the back of the bus with the rest of the passengers in coach. If he hadn’t been so pressed for time, he would have waited and taken another flight, one where he could have gotten a seat in first class. But he was due in a meeting first thing the next morning, so flexibility and time were two luxuries he did not have on this leg of the trip. He’d had to suck it up and deal with the situation, but that didn’t stop him from grumbling to himself.
When they had finally parked at the gate, he knew no matter how much he wanted to be off that airplane—and he really, really, really wanted to get off—it would only further the torture to even think about getting out of his seat just yet. Nothing was going to happen right away; no one was going to move anytime soon where he was seated near the back of the plane, so why bother even trying. Standing would only take him from his uncomfortable seat to stand uncomfortably in the overcrowded aisle, assuming he could even squeeze into it.
He had read the reports by the so-called experts on how a fully loaded 747 could be evacuated in something like ninety seconds. He wondered why those same experts didn’t make a report on how long it took to deplane a fully loaded 747 after a twelve-hour flight, when everyone had to get out of their seat, stretch their sore and aching muscles, find their carry-ons, hit someone by accident with luggage that was too large, then have to stop and hold up everyone else while they apologized, and finally make their way off the plane. Deplaning was not a speedy process, especially when one was seated way, way in the back as Patrick was on this flight.
As he waited, he was neither patient nor impatient. He was just sort of numb. When the hordes of humanity closest to him finally started to move, Patrick tried to remember how his legs worked. After collecting his briefcase from under the seat in front of him, he crawled out of his godforsaken middle seat at the back of the coach cabin, grabbed his one small carry-on bag, and then started to move with the herd off the plane.
When the air on the jet bridge touched his face, it felt like someone had thrown a hot, wet, smelly blanket over his head. Ah, yes, a cool day in Bangkok.


Another truck smashed into the second car, which crushed some more of the cab. The third collision somehow loosened the cab from the other vehicles, and it slid sideways over the edge of the road and down a concrete embankment. The angle of descent was enough that the cab started to roll and did three complete rotations before coming to rest upside down in a crumpled heap of twisted metal and plastic.

Originally from rural upstate New York, Michael Murphy grew up walking through fields of corn taller than most people, riding horses, and driving on dirt roads. For more than thirty years he has lived in Washington, DC where there aren’t many dirt roads or horses.

His biggest influences when growing up were his two grandmothers. Both were ferociously strong women who were widowed young while they still had children at home. Neither remarried, but they picked up the shattered pieces of their lives and built new lives for themselves. They taught him that the underdog could come out on top if he or she just tried.

Those women loved to read and to tell stories, so it just always seemed a natural thing for him to want to do the same. When he hit a major milestone birthday he realized that there were fewer years left in which to do things than there had already been. He made a bucket list, which had writing a book at the top of the list. With his twentieth-third book now in the editorial production process, that dream has been realized and has been one of the high points of his life.

Visit his website to learn more about him and his writing.