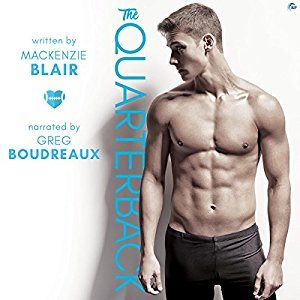 
Matt Lancaster is the star quarterback at Bodine College, a small Southern Division II school with an ultra-conservative Dean of Athletics. Matt is also very much in the closet, and he thinks he’s kept his secret well hidden. Until his best friends take him to a happy endings massage parlor and request a male masseuse for him.

Matt needs to keep his scholarship, win the National Championship, and survive his asshole father. Instead, he falls in love. Trevor needs to accept that the football god is meant to end up with him rather than a perky cheerleader. It’s time for a happy ever after for both of them.

Ok so here's the elephant in the room this book is full of stereotyping and cliches are running rampant here, but let's also recognize that this book is set in the south at a 'christian' college with definite homophobic leanings. Nowhere are we given that impression that this is a progressive college with an accepting or even tolerant administration...so, I'm pretty much thinking stereotyping and cliches are a part of the norm and honestly an 'Oh your gay, that's nice' isn't really going to provide the setting needed to make a story with this background believable so as much as I like many others didn't like the stereotypes and cliches in this case...like them or not...they actually facilitated the story.

Ironically one of the things that I liked about this is the fact that if you look at the reviews on GR, you'll see that a considerable number of them are less than happy with this part of the story and when I to see things like this I view it as a reminder that, while it's often not as fast as many of us would like...the world is changing and people are starting to ask questions and voice dissent when the answers don't feel right. Acceptance is becoming a part of the norm and not the exception and sometimes we need stories like this to make us step back and take a look at how things are now. Ok, I'm going to step down off of my pulpit now.

On to the rest of the things. Overall I enjoyed this story I like both of the MCs...Matt's a deep in the closet gay quarterback and between the fact that he attends a Christian college and his homophobic, douchebag of a father. This man is such a piece of work. I mean I can't even begin to explain how much I disliked this a**hat. He's a con-artist, grifter use whatever word you want and as a father he's both abusive and manipulative using Matt's twin sisters to keep him in line...to keep him locked securely in the closet.


Matt's drawn to Trevor with his Korean/American heritage that give him an exotic look that Matt can't quite seem to resist so when their paths cross Matt may have been torn at first it doesn't take him long to decide that he wants whatever he can get from Matt and if it means being his dirty little secret he can live with that or at least he's willing to try.

I enjoyed the interaction between these two as the for to know each other during their 'study dates' code talk for 'Trevor teaches Matt about sex'. Trevor's family may have rejected him but he's not a weak man by any means. He's working 3 jobs to put  himself through college and while he's initially willing to keep their relationship a secret that doesn't mean that he just roles over if he's unhappy with Matt's behavior. So there's more than just sexual tension between these two men and trust me they're college boys so there's always sexual tension and sexy time.

I have to admit I found a lot of the secondary characters to be more than a little entertaining...in a very tongue-in-cheek manner.  In a nutshell...inappropriate comments were the order of the day with this group. From Matt's twin sister's to Danielle his friend's girlfriend to a coach looking for fashion advice. I can't lie more than once I found myself laughing out loud partially because they were saying things at times that were beyond inappropriate and while the story without the addition of the secondary characters really wasn't over the top. For me it made this all seem so much more tongue-in-cheek adding a touch of OTT humor to the story.

Lastly what made this a story that I was able to get behind and enjoy was the fact that I listened to it on audio and the narrator was Greg Boudreaux (or Greg Tremblay).  I'm not sure what words I can use to express my appreciation for the narrative talents of Mr. Boudreaux but the man is good...I mean seriously GOOD!!! He's not only in my top 5 he's at the top of that list. Without fail he delivers a story that is start to finish a listening pleasure.


An audio book of 'The Quarterback' was graciously provided by the publisher in exchange for an honest review.