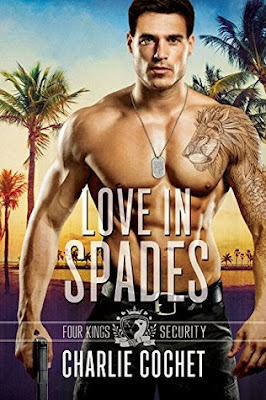 Ex-Special Forces soldier Anston “Ace” Sharpe is fighting a different battle these days—one involving the world of private security across the state of Florida. As part owner of Four Kings Security, Ace and his fellow Kings tackle everything from armed transport and investigations to cyber intelligence and executive protection. Cocky, fearless, and brash, Ace isn’t afraid to take risks.

After years of working alongside his father, Colton Connolly is ready to take the helm at Connolly Maritime, but his father’s retirement is put on hold when Colton begins receiving death threats. If that isn’t bad enough, his father signs a contract with Four Kings Security to provide Colton with round-the-clock protection, despite his adamant refusal. Colton’s life has been turned upside down, the last thing he needs is a shadow, especially in the form of infuriating, sexy-as-sin Ace Sharpe, who seems to be on a mission to drive Colton mad.

Sparks fly the moment Colton and Ace meet on a sultry night club dance floor. But getting involved with a client, even one as fiery and beautiful as Colton Connolly, is a line Ace is unwilling to cross. Colton might be attracted to Ace, but he’d been burned before. He might be willing to put his life in Ace’s hands, but not his heart.

As the Florida nights heat up, so does their passion, and Ace and Colton are faced with a difficult choice—take the plunge and risk it all, or play it safe and walk away?

If Ace can keep a deadly threat from robbing Colton of a future….

Ace’s lips curled into a wicked grin, and he dove under the water. Colton stilled, waiting for Ace to pop, but he didn’t. Jesus, the guy could hold his breath for a long time. It was like he’d vanished. Until something grabbed Colton’s legs. He released a barrage of curses as he was lifted, his arms flailing in an attempt not to lose his balance as Ace came up under him, and Colton ended up on Ace’s shoulders.

“You ass!” Colton hugged Ace’s head to keep himself steady as he sat on the man’s broad shoulders while Ace laughed himself silly. He held on to Colton’s thighs, and started walking. “What are you doing?” Colton squeaked.

“Going for a walk,” Ace said as if it were obvious.

“No, you have something devious planned; I know it.”

Ace chuckled. “Are you doubting me?”


“In my defense, you were being an ass.”

Colton let out a mock gasp. “Are you using inappropriate language toward your client?”

“I’ll show you inappropriate.” Ace growled deep in his throat, and Colton shivered.

“Ace,” Colton moaned. “Please don’t make that sound while my crotch is pressed against the back of your head.”

Ace stopped moving. Before Colton could ask if he was okay, Ace sank into the water, and disappeared again, leaving Colton standing there wondering what the man was about to do next. One thing was for sure, Ace always kept him on his toes. Hands caressed his legs, and Colton groaned, his eyes closing as Ace slid his hands up Colton’s body until he resurfaced, his arms around Colton and front pressed to Colton’s back. Colton covered Ace’s hands with his and leaned back into him before turning in his arms.

“We should head back,” Ace murmured, his eyes on Colton’s lips.

“You drive me fucking crazy, you know that?” Colton huffed. He slipped his hands beneath the water and cupped Ace through his shorts, making him groan. “How about you stop teasing me, take control of these gorgeous balls, and bury yourself deep inside me.”

Ace cursed under his breath. He opened his mouth to reply, but Colton put his fingers to Ace’s lips and released his hold on him.

“You know where to find me.” Colton turned and swam back to the shore. If Ace was determined to drive him out of his mind with his sensual caresses, lingering looks, and sultry voice, then it was only fair Colton return the favor.

‘Love in Spades’ is the first book in Charlie Cochet’s new series ‘Four Kings Security’ and seriously what was I thinking when I decided that I was going to take a pass on this series? Don’t get me wrong my decision had nothing to do with the author or even the book blurb it was based solely on the fact that I’ve had a lot going on in my life lately and I didn’t feel like I had the time to commit to reading another series…well, I was wrong I mean sleeps over rated right?

Ok, enough about my poor life choices let’s talk about something important…like this book!!! I loved this book. First off of you’re a fan of Ms Cochet’s THIRDS series than you know this author creates amazing alpha characters and this series is packed with them…from Ace and his fellow Kings to Colton Connolly the man who’s more than a match for Ace and who very quickly captures Ace’s heart.

Ace and Colton are explosive and initially it’s not really in a good way…an entertaining and more than a little amusing way but definitely not good as far as Ace is concerned, but when these two men meet for the first time it’s a battle of wills and one that both men are determined to win.

Colton’s father has hired ‘Four Kings Security’ to protect him after it’s discovered that Colton’s been receiving death threats. Needless to say, Colton is beyond angry about this as he believes that the letters are simply idle threats. Which leads to Colton’s father’s decision to go behind his back and hire private security upon meeting with them it’s decided that Four Kings will deal with the determinedly stubborn heir to Connolly Maritime with its own form of stubborn and obstinate…enter Anston “Ace” Sharpe, who is assigned to be Colton’s bodyguard.

From the word go Colton decides his mission is to antagonise, frustrate and just generally annoy his new shadow, no matter how annoyingly sexy he is. While Ace is equally determined to not let Colton’s antics do anything but entertain him…game on with these two it’s a battle of wills and may the most determined man win and hopefully keep Colton alive in the process.

I so loved Colton. I was worried that he was just going to be another spoiled rich kid. Fortunately that idea was quickly put to rest as Colton proved himself to be a kind, generous, determined and confident individual willing to not only defend he loves and but those who are in need of his help because of circumstances not of their own making…in short Colton’s a good and decent guy and not the self-centered or arrogant jerk who has a light-bulb moment causing him to realize the error of his ways…sorry but that’s a big turn off in my reading world because rarely do I buy into it.

There’s a lot of background to be had in this story and thankfully it’s been woven into the story and given to us through memories and shared conversations keeping it from being an overwhelming deluge that can often slow a story down. Ace is one of the co-owners of ‘Four Kings Security’ he and his fellow Kings are all ex-Special Forces soldiers and the foundation of this series. If it’s an issue of security these are the men for the job. Along with Lucky, Red and King, the unofficial leader of their family. As well as their shared time as Special Forces operatives I’m pretty sure these men all have their own story and as this series progresses I’m hoping we’ll discover them all.

Admittedly there are some cheesy nicknames going on here…we’ve got a security agency called ‘Four Kings Security’ with an unofficial leader who goes by the name ‘King’ and his partners Ace, Lucky, Red (because he’s a redhead but also interesting coincidence here…cards come in 4 suits and two colors…black and…you guessed it ‘red’, just sayin’) and there’s also Jack and Joker or was that Jester…well, it was one or the other and maybe it was the mood that I was in because I have to admit there are times when something like this would have me rolling my eyes but to be honest this time around it just amused the hell outta’ me and I found myself listen to see how much and how often there were references to playing cards or even card games, I probably should have kept count just for the hell of it but I do know it wasn’t nearly as much or as often as it could have been so for me it was more cute than overly cheesy.

While I really enjoyed the relationship between Ace and Colton and how it developed with all of it’s wit, humor and tension the part of this story that clicked for me was the mystery. I must admit…I did not see that one coming. I had all kinds of theories on who and why and in the end, I was wrong…close but no cigar. It’s been a while since a mystery has stumped me like this one did so well done, Ms Cochet, I really enjoyed staying in the dark until things were revealed.

And last but, not least the reason that this was a solid 5 stars for me and not 4.5 or even 4…scratch that I’m pretty sure even if I’d been reading this one it would have gotten more than 4 stars from me but what cemented it firmly as a 5-star audio book for me was of course the narrator. Greg Boudreaux. I’ve listened to over 30 books narrated by this very talented person and without fail I have enjoyed his narration each and every time and frequently more than once, regardless of how good the story was or wasn’t and ‘Love in Spades’ was no exception to this and I’m looking forward to revisiting this the men of ‘Four Kings Security’ in the future…especially if each subsequent story provides me with the entertainment that I enjoyed this time around. I’ll be more than happy.

An audio book of ‘Love in Spades’ was graciously provided by the tour organizer in exchange for an honest review.

Charlie Cochet is an author by day and artist by night. Always quick to succumb to the whispers of her wayward muse, no star is out of reach when following her passion. From adventurous agents and sexy shifters, to society gentlemen and hardboiled detectives, there’s bound to be plenty of mischief for her heroes to find themselves in, and plenty of romance, too!


Currently residing in Central Florida, Charlie is at the beck and call of a rascally Doxiepoo bent on world domination. When she isn’t writing, she can usually be found reading, drawing, or watching movies. She runs on coffee, thrives on music, and loves to hear from readers.