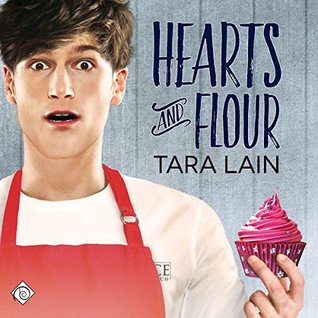 A raw food fanatic and a cupcake baker -- can two hearts rise above the flour?

To Micah Truveen, raw, vegan food is his religion. So when his devoted customers start showing up with white flour cupcakes, Micah could kill. To cap off a rotten day before Valentine’s Day, Micah comes home to find his boyfriend, Dharamaram, in bed with someone else. In frustration, he throws the rat out and agrees to go to his friend’s orgiastic anti-Valentines party where he meets a gorgeous cross-dressing guy who gives him a night to remember.

Southerner, Quentin Darby wishes he could stop wearing women’s clothes. He desperately wants to live up to the glowing opinion his grandmother holds of him, so he’s never even told her he’s gay. And now there’s this guy who makes him wish he could just be who he is. But Micah finds out that Quentin is none other than the baker responsible for the plague of cupcakes afflicting the community! And Dharmaram adds a little blackmail to the mix. Two guys with nothing in common except love--food for thought.

Ok, so other than the grass, this one was pretty darned cute...

Micah Truveen is a raw food vegan and he's all about the healthy foods. So when he discovers his customers are flocking to the new cupcake shop up the street...you can well imagine that he blows a gasket and then he goes home to find his sleazeball of a boyfriend, Dharamaram doing the nasty in bed with someone else...well he blows another gasket and really who can blame him? Certainly not I. I was so on board with him kicking his backside to the curb and then heading over to his friends anti-Valentine's party (read orgy) where he meets this incredibly sexy, southern belle...Quentin Darby.

Quentin likes his pretty things sexy dresses, stiletto heels and can I just say here...I'm jealous because damn, I can't walk in those things but seems Quentin's a runway queen on them.

Quentin moved to California with his southern grandmother to take care of her. I loved Quentin's grandma...she's awesome, I'd move to Cali to take care of her too. Unfortunately Quentin's got secrets from that he's keeping from her. He's afraid of loosing her love if he tells her that he's gay much less that he's a cross dresser. But Quentin's also not told Micah what he does for a living either...maybe Quentin has a cupcake shop...oopsie, this is going to be an awkward moment.


"Hearts and Flour" was also a chance for me to check out a couple of new narrators...Rys Forest and Stephen Kurpis and I have to say from a purely audio perspective I enjoyed this one. I'm not sure who read what parts but I'm ok with that as well since I can honestly say I liked it all...however, I will say whoever did the voice of Quentin was awesome. When Quentin was dressed as a woman the narrator gave him this wonderful husky, feminine tone that really gave depth to that character and simply enhanced the image of Quentin that I had in my head...it was spot on.

I'm definitely going to keep an ear tuned for more by these two. At present there's only one other book to their credit that I was able to find on audible and it's also by Ms Lain...so, it looks like I've got at least one more Tara Lain book in my future.

If you're looking for something cute and fun to enjoy on audio...let's call it summer listening. You might want to give this one a chance. It's a nice way to pass a bit of time on a too hot to do anything summer afternoon.

An audio book of "Hearts and Flour" was graciously provided by the publisher in exchange for an honest review.