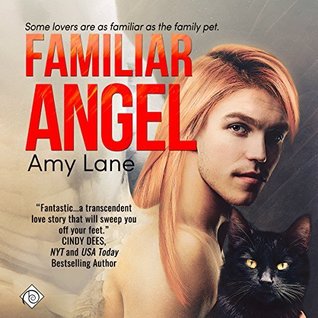 
One hundred and forty years ago, Harry, Edward, and Francis met an angel, a demon, and a sorceress while escaping imprisonment and worse! They emerged with a new family—and shapeshifting powers beyond their wildest dreams.

Now Harry and his brothers use their sorcery to rescue those enslaved in human trafficking—but Harry’s not doing so well. Pining for Suriel the angel has driven Harry to take more and more risks until his family desperately asks Suriel for an intervention.

In order for Suriel to escape the bindings of heaven, he needs to be sure enough of his love to fight to be with Harry. Back when they first met, Harry was feral and angry, and didn’t know enough about love for Suriel to justify that risk. Can Suriel trust in Harry enough now to break his bonds of service for the boy who has loved his Familiar Angel for nearly a century and a half?

I really enjoyed this one when it was first released and listening to the audio book narrated by Gomez Pugh has done nothing to change how I felt than, so honestly I'm not about re-inventing the wheel so my current review for this story still stands...


It's been a hundred and forty years since Harry, Edward and Francis found themselves in the wrong place at what turned out to be the right time for them.
Life in a brothel was neither safe nor good for the three boys and Harry and Edward were determined to keep Francis safe from the darker side of brothel life.

When things became too dangerous Harry and Edward knew that the only way to keep Francis safe was to flee. Trapped in a grove and hiding among some bushes the boys are witness to a meeting of supernatural beings...an angel, a witch and a demon and his protege. As events unfold what the boys come to think might be their undoing turns out to be their salvation and they are swept away to begin a life that none of them had ever dared to hope they would be a part of.

This was also the first time that Harry would meet the angel, Suriel. Over the next 140 years as the boys learn magic and what it's like to truly have a family and they come to find what they believe to be their purpose in the world...to save those who have been enslaved.


Throughout the intervening years Suriel remains a part of their lives and slowly he and Harry develop their own special bond and for the most part 'Familiar Angel' is their story, but it's also a lot more than that because there's so much more to this story than just a love story between Suriel and Harry. There's a lot of background in this story for all of the characters  this story covers the beginnings as a family for Harry, Edward, Francis, Emma (the witch), Leonard (the demon & Emma's lover) and  Bel (Emma & Leonard's son). As well we are given Suriel's background and a glimpse of Mullins (Leonard's protege).

My only real reservation with this one was that I truly would have liked more and not just because I was enjoying the story and...well, I am greedy that way...no this time I actually have a valid reason and it's because as well as being Harry and Suriel's story 'Familiar Angel' is also giving the background for this story and laying the groundwork for future stories and this is a story that feels like it's big and it just needs a little more than some other stories might need. I'm not talking about hundreds of pages here I just feel like a little more background and groundwork for future stories would have been nice and I acknowledge it could be that I'll get it in future stories and maybe, I'm just being a bit impatient since I have to admit that while I wanted more I also wasn't left feeling like I was missing anything...so maybe, I was just being greedy but you know angels, witches, demons...can you blame me?

'Familiar Angel' delivers a story that while based on a concept that we're all familiar with (no pun intended) that of witches and their familiars, it delivers the relationship from a fresh perspective and in a new way.

I loved the sense of family that grounds this story and while Suriel and Harry are the MCs in this story there's also a stronger sense of an ensemble cast contained within. While the story jumps back and forth between the past and the present it's well done and I didn't have a problem with following events and where they belonged on the timeline and as always Ms Lane has created more than one or two characters who caught my attention and left me wanting more.

The only thing that was going to make this one better for me was having it on audio and narrated by someone who could give voice and live to the characters that the author has created and Gomez Pugh has solidly accomplished this task bringing to life a collection of characters that for me are definitely among Ms Lane's most interesting and unusual. I'm looking forward to enjoying this one again...soon.

An audio book of 'Familiar Angel' was graciously provided by the publisher in exchange for an honest review.