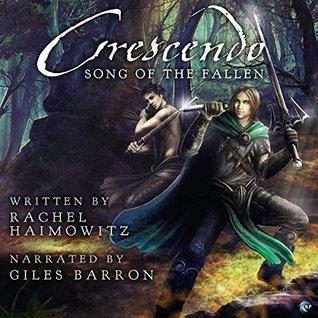 
Bridging the hatred of centuries did not come easy for Freyrík Farr and Ayden Vaska. As prince of a war-torn human province, Freyrík could ill afford to fall for an enemy. And Ayden, an elven warrior with three hundred years of bitterness in his heart, wanted no part of love. Yet they came together despite themselves and the wills of their peoples, joining hearts and minds to fight a race of Dark Beasts threatening the extinction of mankind.

Yet the Dark Beast threat pales beside the dangers of a summons to the human High Court, home of the Aegis Exalted and the harshest test yet of Ayden’s and Freyrík’s fledgling love.

When the Aegis strips Ayden of his magic, Freyrík is forced to choose between his love for elf, Aegis, and king, all the while seeking the one uncertain path that might save his doomed race. Time is fast running out for mankind, and only by making peace amongst themselves and with their ancient elven enemies can they end the Dark war—and undo the tragedy that’s plagued humans, elves, and Dark Beasts alike for the last three hundred years.

You might remember that I reviewed the audio book for 'Counterpoint' the first book in this duology about a month ago and I loved it...well, some things haven't changed because I loved this one as well.

'Crescendo' picks up right where we left off at the end of 'Counterpoint'.  Freyrik and Ayden are heading for the High Court where their presence has been demanded by the Aegis Exalted.

As the tensions between elves and humans grows, so does the love between Freyrik and Ayden. Things go from bad to worse when the Aegis binds Aydin's magic and Aydin discovers that he's not the only elf being held prisoner by the high court. Between the intrigues of the high court, the threat posed to mankind's existence by the dark beast and the machinations of Freyrik's brother as he plots the down fall of the Aegis. Freyrik and Aydin are fighting not just for their survival but the survival of both of their races.

This book...Wow! Just wow! It's been quite a while since I've read a fantasy novel that contained a plot that captured me as strongly as this one did. The plot for this story was a little more complex than the usual and things often weren't quite as they seemed especially where the Aegis and the high court were concerned and I loved it but I have to admit keeping track of all the subtle twist, turns and nuances of events as they transpired and the impact that they would have on events and individuals was a bit challenging.


I loved the pacing and the ongoing world building that occurred in this book always being given enough of both to keep my imagination fully engaged and the story moving at what for me was a steady pace and while not to fast it also didn't drag.

I was on the edge of my seat pretty much from start to finish as Freyrik and Ayden struggled to find a solution that would save both of their races and allow them to be together. Their's is not an easy relationship and sadly more often than not it's Ayden who pays the price in blood, pain and ultimately with the binding of his magic. While his faith in Freyrik may falter at times it never fails and in the end when they need each other it holds strong.

My one and only niggle was the ending and even this by no means spoiled things for me. I have to admit that after all that they went through to save their races and each other I would have liked a little more happy times with Rik and Ayden but still all things considered knowing that they got to be together was a big plus.

While Craig Beck was the narrator for the first book, Giles Barron took on the challenge of narrating 'Crescendo' and I was really pleased with his narration. While I had a month between the first and second book it was by no means enough time to forget the wonderful narration that I enjoyed in 'Counterpoint' and fortunately Mr. Barron was equal to the task drawing me back into the story effortlessly and giving me voices that held all of the expression and consistency that was present in the first book.

'Song of the Fallen' is my first time reading this author aside from a short story and a book co-written with another author and I have to admit maybe that's not such a good thing because for me this one has set the standard pretty high for future books by Ms. Haimowitz and needless to say I'll be adding Giles Barron to my list of narrators that I like.

An audio book of 'Crescendo' was graciously provided by the publisher in exchange for an honest review.