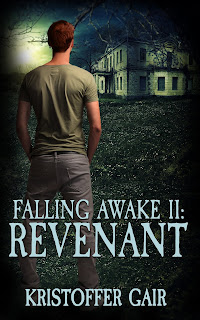 I sat on this review for a few days, hoping I would have the words.

I don't have the words. Sorry, Kristoffer.

But I promised a review, so I'll do my best to somewhat coherently tell you about this book. First off, this is not a romance. This is a thriller/mystery/paranormal/horror kind of book, and a prequel of sorts to the first book, Falling Awake. If you've read that first one, this second book will give you the background information that you wanted but didn't need for the first book.

When Andrew O'Connell was ten years old, he went to the fair with his friend Thomas, also ten. The night after they went, Thomas was abducted from his house in the middle of night, his parents slain in their bed. Thomas was found dead a few days later in an abandoned house. And for fourteen years, Andrew has felt unimaginably guilty, because he believes that what happened to Thomas was his fault. He has nightmares nearly every night, and he will not stop until he can figure out what really happened to Thomas, and find the men who so brutally killed his friend.

Andrew now works for OSHA, tasked with travelling to areas where an accident has occurred to find out what really happened, to smoke out the truth, always one step behind the elusive person responsible. At the same time, Andrew tries to gather more information on the incident that took his childhood friend, and he's not afraid to use whatever means he has to just to get the answers he needs. Andrew is not always a good man, he's not always a nice guy - he uses people even though he feels guilty doing so - because what matters is that he finds the perpetrators of that heinous crime and stops them before they can kill again.

The book is set in the early 1970s, when Andrew is 24, which means the original crime took place in 1958. The author did a fine job on the research to ensure the references to historical facts are accurate. There was but one inaccuracy, which I'm not going to tell you about - let's see if you can spot it yourself.

The writing is vivid, drawing you in from the get-go. Andrew's nightmares are visualized, and I was more often than not on the edge of my seat while reading this book. The author doesn't spare us the horrors perpetrated upon Thomas, though they are doled out in smaller doses so as to not overwhelm the reader. It's difficult on occasion to read about the violence that little boy endured, and there were tears in my eyes plenty of times as well.

Evil is real, and it will corrupt and claim a person's soul. But there is goodness too, there is light, and we have to believe that the light will prevail if only you have heart. The book is aptly named "Revenant" - one that returns.

There is no happy ending - there really couldn't be. And the ending was unexpected and also not - there actually was no other imaginable way of ending the book.

It is a prequel, of sorts. Keep that in mind when you read this. And read this, you should. Because it's different and it's fantastic, and it will haunt you and make you think.

I'm told the author is currently working on the third book, which I would assume will pick up where the first book ended.

I can hardly wait to read it.

** I received a free copy of this book from its author in exchange for an honest review. **

Thank for stopping by. Until next time, happy reading!