Blogtour: Up In The Air: West Coast by George Loveland


Thanks for having me today at My Fiction Nook; here I'm answering a few questions from my readers.

Do you have a character in your head that you have yet to write a story for?

Yes, Miss Belle End also known as Dave. He is a complex and massive character. He showed up in “On the Third Kiss” and originally he was meant to be the lead in the story but I just couldn’t write him. Not yet. I have an idea on what’s going to happen for him, but it’s going to be a while before I write his story. I have too many others to write before I get to him.

Do you read your reviews, and if so do they influence the way you write the next book at all?

I do. I love them and take from them the feedback. My first novella, everyone said that it was quick read, which surprised me because it took me so long to write. Yet, it helped me realise that I needed to add more to my stories in the future. I had planned for Up in the Air 2 to be a short novella as well, but based on the feedback I added more to the story, which actually made me very happy.

Other feedback came from a comment about repetition which I hadn’t picked up on. So now I read through and check to see if I’ve used phrases again and again so that the reader doesn’t get bored with my stories.

Do you take a break from a first draft to get distance from it?

I write the first draft fast, and then go back to edit it. What i have found is that the story changes from my original plan and what I wrote at the beginning may need changing once I’ve got to the end. Whilst it is fresh in my mind, I read through and make the changes needed. Then once I am happy with it, I will let it go and then come back to it a couple of weeks later.

How do you choose names? If you decide to change a name, do you feel that it alters your perception of the character?

There are a few ways, but it’s usually a name that pops into my head and I will go from there. Other times, I will research a popular name for the year the character would have been born in, to get inspiration. I do have a list of names I have used before, as I have tried to use the same name before and need to change it.

I have had to change names in stories, and it’s been both a blessing and a curse. My drag queen had a different name to start with, but it didn’t work and I had to come up with something else. The character fell into place once I had the name as well and therefore I was able to really get on with the story. Another time, I met a guy with the same name as the bad guy in my story, and I had to change it because he was so nice. It turned out for the best as well as the name suited the slimeball of a character I’d written.

How do you keep characters consistent through a story?

I have a few notes written down about my characters, but find that they will become more fully formed as I write the story so it’s no point me writing all the details about them. I have a loose background of who they are what they’ve been up to before the story started. In terms of the story, when I do my first edit I will correct all the things which I needed to change to keep the consistency needed.

How important are secondary characters to your story telling?

I think that they are very important. Max for example, in Up in the Air 1 was a massive catalyst for what happened to James, and from there spawned his own story. There’s another story written, but not edited where one of the characters who I created just to be used by the main character ended up needing his own story. 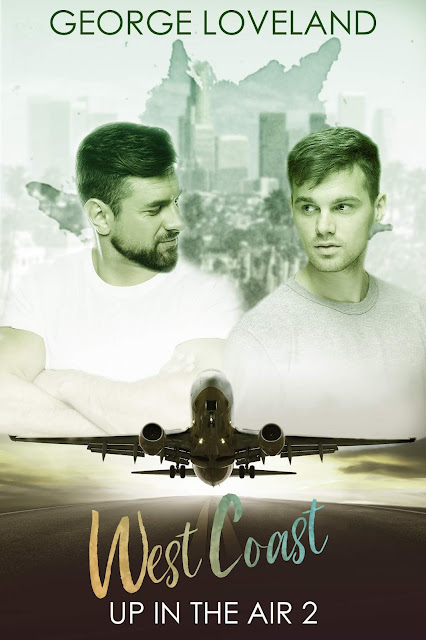 Up In The Air Series

Max Cooper has never known love and uses drink to numb the feelings of rejection he’s faced with. It doesn’t help him in his career as an air steward when after a very drunken night his best friend swaps their flights over so Max can keep his job.

When Max flies out to Los Angeles, his patience is tested when he offers to help fellow air steward and rising drag queen, Dai Zee, with her costume changes at the best drag club in LA, Flamingos. While he watches Dai Zee perform, he catches the eye of a guy in the corner, but fails to find him when the performance ends. An ill-timed text message sends Max back to the bottle, and into the bed of a man he doesn’t know, and doesn’t want to be with.

The next night at Flamingos he finds the man he was searching for, but it’s not as easy as he’d hoped. Antonio Baldini isn’t interested in a drunken Max and rejects his advances until another drag queen, Miss Crystal, plays a hand in getting the two of them together. As Max and Antonio step past the initial confusion, they tread carefully with each other, neither one wanting to get hurt.

Even when Max is back in London, the late-night video calls don’t stop, but it’s when they are reunited in Las Vegas that things turn serious.

Max can’t shake his past, and someone is out for him and his job – trying to stop him from flying altogether. He’s worried about what it will mean for his new relationship if he can’t fly; and whether he can stay away from the drink long enough to be with a man who seems to care for him.