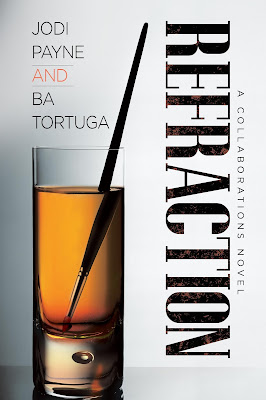 Unable to deny a new inspiration, Tucker sublets a studio and finds the city’s energy almost as addictive as Calvin.

Tucker is obsessive, barely holding on to sanity as his art consumes him, and Calvin is dealing with demons of his own, trying desperately to protect his soul in a business where only his appearance has value. They each prove to be the perfect remedy for the other’s personal brand of crazy until, in the midst of stress and exhaustion, they discover that a promise Calvin needs is the one thing Tucker can’t give him, and their heaven turns to purgatory.

Can both men find a path toward wholeness in Tucker’s beautiful but chaotic Texas home? In order for them—and their passionate relationship—to thrive, they’ll need to adapt, share their psychoses, and find a true balance between New York City and rural Texas.


Jodi: Hey there! I’m Jodi Payne. I'm a proud Jersey Girl, I love Broadway musicals, the beach, tequila, and I'm almost always caffeinated like whoa.  I’m here with BA Tortuga to talk about our new release, Refraction!
BA: Hey y’all! I’m BA Tortuga, the resident redneck, and lover of rubbing characters of different types together. :D
Jodi: Refraction takes place in New York City, where Tucker, an artist up from Texas to show his work meets a local underwear model named Calvin, who saves him from freezing his buns off in the snow. Tucker isn’t just crazy talented, he’s hot and haunted, open-hearted and hungry for new experiences.
BA: *grins* I swear, y’all, I just wanted to put a character in a different place. I never expected for Jodi to pull up Calvin -- who is sweet and fierce and wonderful and wild, all at once.
Jodi: There are a dozen cultural differences between Tucker and Calvin, and they all seem to come up at one point or another. But the differences BA and I like to talk about are things like music and food. So, in honor of these men from two different worlds, we bring you our Top 5 foods!


Jodi’s Top 5 Favorite Foods from New York City
1. Pizza. Everyone knows that New York makes the best pizza in the country, right? Super thin crust except for the outside edge, which is thick and crunchy, and sturdy enough to hold the slice together (and all the cheesy grease) when you fold it in half to eat it.
2. Bagels. The theory is that New York bagels are so good because of something in the water in NYC. New York bagels are boiled before they are baked an that makes them dense and chewy. Best served with a schmear!
3. New York style cheesecake. Meet you on the corner of Flatbush and DeKalb Ave in Brooklyn for Junior’s cheesecake! Okay, yes, there are a couple of Manhattan locations now, but when I lived in NYC it was Brooklyn or bust, and we made the trip. Dense and smooth, best cheesecake ever.
4. Hot pastrami on rye. Piled high… no, not just high, Really Stupid High so you can’t get your mouth around it, with Swiss cheese and pickles. Mmm. I miss the Carnegie Deli. It closed a couple of years ago.
5. Black and white cookies. These are everywhere now I suppose, but I remember going into the city with my grandmother and she’d buy them for me and my sister and we thought they were such a treat! Remember to eat the vanilla first because everyone knows the chocolate is the best part.


BA’s Top Five Texas Foods
First, just five? Are you insane? Five? *sighs* I’ll just do my top five. There are so many...
1. Nachos. Nowhere else makes good nachos. Nowhere. I don’t want the piled up, gooey, dripping nonsense. No. I want flat nachos made under the salamander with the garden in the middle and guac on the side and #2 in a bowl.
2. Salsa. OMG. Sauce. I miss good, spicy salsa. I love y’all, but no one does it like the Lone Star State.
3. Chicken fried steak. Every family has their own recipe. Every restaurant does too. The dish comes with mashed potatoes, cream gravy, and green beans/fried okra/corn. Nods. This is heaven on a plate.
4. Whataburger ketchup. Until you taste it, you won’t understand, but it’s a thing. You will never go back.


5. Brisket. I don’t miss it, because I make it, but there’s nowhere on earth you can get that pit BBQ outside of central Texas. Sorry. That’s just how it is.


Jodi Payne takes herself way too seriously and has been known to randomly break out in song. Her men are imperfect but genuine, stubborn but likable, often kinky, and frequently their own worst enemies. They are characters you can't help but fall in love with while they stumble along the path to their happily ever after. For those looking to get on her good side, Jodi's addictions include nonfat lattes, Malbec and tequila any way you pour it.


BA Tortuga: Texan to the bone and an unrepentant Daddy’s Girl, BA Tortuga spends her days with her basset hounds and her beloved wife, texting her sisters, and eating Mexican food. When she’s not doing that, she’s writing. She spends her days off watching rodeo, knitting and surfing Pinterest in the name of research. BA’s personal saviors include her wife, Julia Talbot, her best friend, Sean Michael, and coffee. Lots of coffee. Really good coffee.


Having written everything from fist-fighting rednecks to hard-core cowboys to werewolves, BA does her damnedest to tell the stories of her heart, which was raised in Northeast Texas, but has heard the call of the high desert and lives in the Sandias. With books ranging from hard-hitting GLBT romance, to fiery menages, to the most traditional of love stories, BA refuses to be pigeon-holed by anyone but the voices in her head.