Blogtour: Inside Darkness by Hudson Lin

Welcome to the blog tour for Inside Darkness! I’m Hudson Lin and I’m here to share some behind the scenes sneak peaks about my debut novel, available June 11th. Leave a comment on the tour posts for a chance to win a $10 gift card from Amazon! 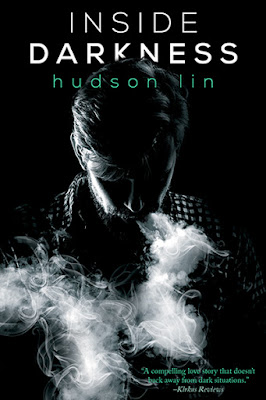 He’s come in from the field, but the darkness has followed him home.

After a decade as an aid worker, Cameron Donnelly returns home jaded, tired, and with more than just a minor case of PTSD. Plagued by recurring nightmares but refusing to admit he has a problem, Cam quickly spirals into an alcohol-infused depression, and everyone around him is at a loss for how to help.

Journalist Tyler Ang met Cam on a reporting assignment in Kenya, and their first encounters were rife with hostility and sexual tension. Back in New York, their paths continually cross, and each time, Cam’s brokenness reminds Ty more and more of his own difficult childhood. Letting Cam in goes against Ty’s instinct to live life autonomously, but the damaged aid worker manages to sneak past his guard.

Their relationship is all sharp corners and rough edges, and just as they’re figuring out how to fit together, a life-threatening accident puts it all in jeopardy. If they want a future together, both will have to set aside their egos and learn to carry each other’s burdens.

Curious about what Cam and Ty look like? Having pictures help me visualize the characters when I write. Let me know what you think of this dream cast!

Cam has auburn hair and green eyes from his Irish heritage. His height is never specified, but I always pictured him in the six foot range. His weight fluctuates a lot throughout the book; while in the field, he tends to lose a lot of pounds to the point that his clothes hang off him, whereas his weight bounces back when he’s States-side and gets fed all sorts of decadent food by the people around him. His hair situation also changes quite a bit: he lets his hair and beard grow out while in the field until he looks kind of wild, but trims it back to a more clean cut look when in New York.

I stumbled upon this picture of Tom Hardy that fits the bill exactly, right down to the furrowed brow. And a model named Jeff Tomsik who has a more clean shaven look.


I’ve mentioned in previous blog posts that Ty was initially based on Anderson Cooper, but what does an Asian Anderson Cooper look like? Beats me. I tried googling it and was entirely unsuccessful. But Ty does has the same suave, looks good in a suit or jeans and t-shirt, put-together coolness I tend to associate with Anderson Cooper. He gravitates toward a polo and chinos with loafers style, prefers Brooks Brothers, but can occasionally be found in snug fitting jeans and a perfectly fitted tee.

Speaking of Brook Brothers, I was searching their website for clothing inspiration and stumbled upon the perfect Ty, all dressed up and everything. Cesar Chang is a model from Singapore who embodies all that Ty charm (I tried looking for a picture with him wearing clothes, but it doesn’t seem to exist… shirts must just melt off him).

And lastly, this dream casting wouldn’t be complete without mention of Busker, Cam’s companion dog that he rescues from the shelter. Busker’s a black and white mutt with scraggly fur, he drools and is half blind. But he’s the sweetest thing ever.

Hudson Lin was raised by conservative immigrant parents and grew up straddling two cultures with often-times conflicting perspectives on life. Instead of conforming to either, she has sought to find a third way that brings together the positive elements of both.

Having spent much of her life on the outside looking in, Hudson likes to write about outsiders who fight to carve out their place in society, and overcome everyday challenges to find love and happily ever afters.

When not engrossed in a story, Hudson knits, drinks tea, and works the nine-to-five in the beautiful city of Toronto, Canada.

To celebrate the release of Inside Darkness, Hudson is giving away a $10 Amazon gift card! Leave a comment with your contact info to enter the contest. Entries close at midnight, Eastern time, on June 16, 2018. Contest is NOT restricted to U.S. entries. Thanks for following along, and don’t forget to leave your contact info!


Promotional post. All materials, including the images, were provided by the author, via the publisher. Blogger does not claim ownership or copyright of these images.