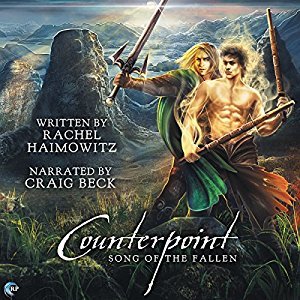 It is the twilight of mankind. Depleted by generations of war with a dark race, the human kingdoms and their ancient alliance stand on the brink of extinction. The outlands are soaked with the blood of the fallen. The midlands are rotting with decadence and despair.

Elfkind, estranged by past crimes, watches and waits for nature to run its course.

And then the two collide.

Ayden's life has long been guided by two emotions: love for his sister, and hatred of all things human. When he's captured in battle, he must for his sister's sake swallow his pride and endure slavery in the service of a human prince, Freyrik Farr.

Freyrik's always known elves to be beautiful and dangerous, but never has one affected him as deeply as Ayden. Can his life of service to his people leave room for this attraction? Dancing on a dagger's edge between duty and high treason, Freyrik discovers that some choices can change a life, and some an entire world.

Between prejudice, politics, pride, and survival, Ayden and Freyrik must carve a new path, no matter how daunting. For nothing less than the fate of both their peoples rests on the power of their perseverance and their love.

Note: This edition is a re-release of the same novel first published in 2010 by Guiltless Pleasure Publishing.

This title is #1 of the Song of the Fallen series.

If fantasy's your thing...you won't want to miss this one...

I've had this story on my radar for a while now and when the opportunity arose to review the audio book I was just all over that one. Craig Beck is the narrator for this story and he's definitely one of my favs when it comes to narrators...so, this all felt more than a little promising.

Usually I try to give a brief synopsis of the story in my review but to be honest I really couldn't figure out how to do that without 1. including any spoilers. 2. ending up with a really long winded review and 3. there's this thing called 'a blurb' so my brief explanation comes down to 'please read the blurb for this book' it'll make your life and mine simpler...thank you.

I know I've said this on more than one occasion but I'm going to be a bit redundant when I say that the fantasy genre was where my love or reading truly got it's roots. From authors such as Terry Brooks and Jacqueline Carey to Sharon Shinn and Brent Weeks, I've dedicated many hours to enjoying their writings. I have to admit though I am really, really picky about what I read when it comes to fantasy. I'm not saying that what I read is 'the best' or that I'm any kind of expert on anything other than what appeals to me and what I know I'll enjoy...


Sure I might think that some of the fantasy books that I've read are among the best that are out there but I'm pretty sure that's something that we all feel about some of the books we've read and if we don't than really, why did we bother to read those books?...just a thought and it was that desire to read some more awesomely good fantasy that brought this book onto my radar and I'm glad that it did because I really do believe that this one is among some of the best fantasy that I'm had the good fortune of encountering.

It has so much of what I enjoy in a good fantasy novel. Of course there are elves in this one...hey, sue me I like elves. It has a huge and epic adventure with smaller subplots that are part of the overall story arc. The characters are interesting and have depth and the world building is incorporated as a part of the story and not an info dump so the reader gets to absorb the history and geography of the world in digestible pieces and if it's done right it's at times when the information is relevant to the events occurring at the moment.

There's a war brewing between the humans and elfkind and it stems back to events that transpired before so long ago the humans now weren't around so for them the events that are leading up to this are more legend and lore than actual history...but Ayden remembers...after all 300 years really is less than half a lifetime ago to an 800 year old elf. But it's also a long to time for hatred to burn in a heart...even the heart of an 800 year old elf. But even a heart filled with hate has room for love and Ayden loves his sister above all else and when the only way to save her is to indenture himself to  the very race he hates he's willing to do it, if it means saving his sister from the humans.

Ok, so that's all the babbles I'm going to have about this story. Now, let's talk about what I liked, well honestly...pretty much everything except for the fact that as a race...the humans were pretty much a big ole' bag a dicks...seriously the only one I had any use for was Prince Freyrik and even he had his moments and as much as I might have occasionally wanted Ayden to kick some human butt and escape...I got it really I did. His sister was there as well being held hostage and if he was going to just cut and run without a care for what might happen to her...well, really why bother? Ayden's actions were very much driven by his concern for his sister's safety and well being. So frustrating but also as I said 'I got it'.

I think for me one of the best parts of this story was the relationship between Ayden and Freyrik. This was not a case of insta-love or lust at first sight or any of that...nope this one was enemies to tentative friends to maybe a bit more than friends and finally lovers...seriously SLOW burn here folks these guys were not rushing into anything and quite honestly had thi sbeen handled any other way and I would have been calling b*llsh#t! really fast because we're talking about a war between races that's centuries old and bone deep. Ayden hates humans and for him to go from 300 years of hatred to caring about much less loving even one human is not going to be an overnight event especially given the fact that for his sister and especially for Ayden there's a lot of bad sh*t happening in their present.

Ok so here's the deal because I can already see that this is turning into a very long  review and I haven't even begun my spiel about how much I loved Craig Beck's narration of this story and I did. The man does not disappoint. I loved his voice for Ayden and Freyrik sounded so much how I would imagine him to sound a bit of an snooty English lord sounding  voice...it worked for me it just freakin' worked.

I'm pretty sure that I could go on for at least a few more paragraphs about how much I enjoyed this first book in Rachel Haimowitz's 'Song of the Fallen' series, but you see I did and I think that's become abundantly clear by the 4.5 stars and the somewhat lengthy review that's happening here and the more time I spend rambling on about 'Counterpoint' the longer it's going to take me to get to 'Crescendo' and a few other awesome stories that I've got lined up so I'm simply going to summarize here and say 'If you love fantasy and you're looking for a new author to check out seriously give this one a shot. It's available on audio but you can also get the e-book if audio's not your thing but really...Craig Beck...just sayin' either way it's a story worth reading.

An audio book of 'Counterpoint' was graciously provided by the  publisher in exchange for an honest review.