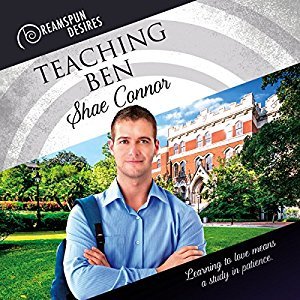 Learning to love means a study in patience.

Fresh out of the military, Ben Cooper is ready for a new start. He’s away from his domineering father, making his own choices… and out of the closet. On his first day of college, he meets David Powell, who’s just the kind of gorgeous man Ben’s dreamed of. Too bad he’s the teaching assistant—which makes him off-limits in Ben’s eyes.

David is Ben’s age, but his life has taken a different path. He’s close with his family, who helped him deal with personal struggles after he came out. And while he’s staying away from any hint of scandal, Ben’s a kind of temptation he hasn’t faced in years. If only they’d met on more equal footing.

As the semester progresses and their lives become more entwined, keeping their relationship platonic becomes more difficult. They just have to hold out until the end of the semester….

The romance begins when the semester ends...

Ben Miller and David Powell may be the same age but they've lead very different lives... ironically, Ben's spent the past few years in the military as a way to escape his overbearing father and earn his freedom to discover and be the person he wants to be.

David comes from a life of privilege and ultimately excess leading to his ultimate downfall. But thankfully David's grandfather refused to turn him back on him and after some tough love David's turned himself around and now he's back in school with a plan for his life.

Though they've led very different lives Ben and David quickly discover that they share a mutual attraction and respect for each other and a friendship quickly begins. David is the TA in one of Ben’s college classes and while they’re attracted to each other neither man wants to complicate their life with a relationship while they’re student and TA so they’re determined to keep things strictly platonic until the semester is done even though there is no actual rule against them dating or having a more personal relationship. David’s got things in his past that have him wanting to ere on the side of caution and Ben’s just stepping out of the closet, so he simply wants to proceed with caution and he’s not looking to complicate the life of someone that he’s pretty sure he wants to have a life with.

I really enjoyed this one it was sweet and at just under 6 hours of listening time things were kept moving at a good pace without becoming boring or repetitious. There were some interesting secondary characters David’s sister and Ben’s laundry friend who took him underwear shopping…yeah, that was a fun time and if you want to know more you’ll need to check out the story.

The focus of this one is on the relationship and not the sex…sorry, but facts is facts. Now be that as it may I still found David and Ben to be an adorably sexy pair and their interactions were delightful and it was nice to have both David and Ben’s perspective on things as the story alternated between them. As with any interesting and entertaining story we are given at least one obstacle for our MCs to overcome and I liked how Ben and David came together to resolve their obstacle and I loved David’s family they were truly delightful…especially his mother. I got more than one chuckle from her.

‘Teaching Ben’ is only the second book that I’ve listened to that was narrated by Kenneth Obi but I have to say I’ve enjoyed them both and I certainly wouldn’t hesitate to listen to more of this narrators works. I liked the voices that each of the characters were given and they definitely meshed with any ideas that I might have had regarding how a character sounded and I also enjoyed that the voices were expressive and conveyed emotion and feelings within what felt like an appropriate range…in other words things never felt so extreme that I wanted to roll my eyes in exasperation. The conversations had a natural feel and sound to them and for me that’s a good thing.

So for me Shae Connor and Kenneth Obi are each 2 for 2 and I’m looking forward to whatever comes next from this author and/or this narrator.

An audio book of 'Teaching Ben' was graciously provided by the publisher in exchange for an honest review.